Why Missouri is ground zero for new COVID surge: "We are going to see a lot of people die"

Just 46% of adults in Missouri have been vaccinated against COVID-19, one of the lowest rates in the country 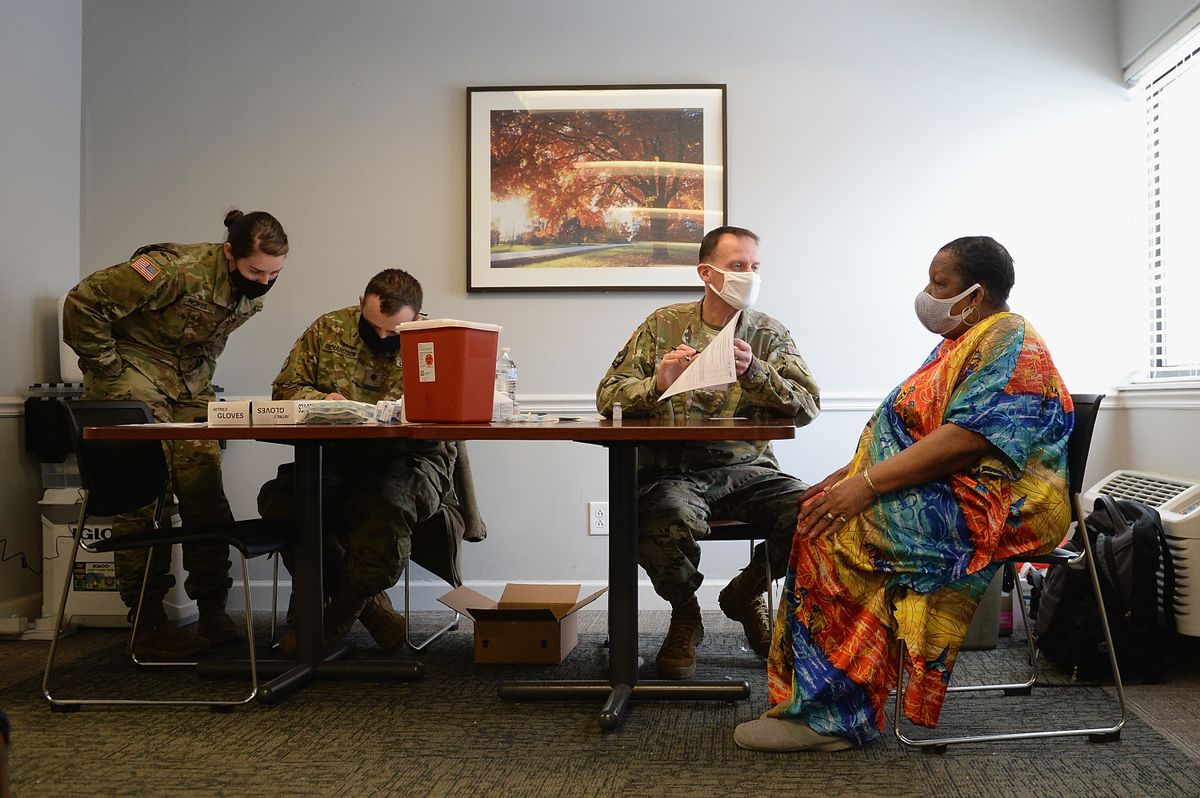 Members of the Missouri National Guard work to administer the Covid-19 vaccine during a vaccination event on February 11, 2021 at the Jeff Vander Lou Senior living facility in St Louis, Missouri. (Michael Thomas/Getty Images)
--

According to National Public Radio, 67% of U.S.-based adults were at least partially vaccinated for COVID-19 following the Fourth of July. President Joe Biden hopes to see that number increase, but anti-vaxxer attitudes are more common in red states than in blue states — some of which have COVID-19 vaccination rates that are higher than the national average. Missouri is a red state, and Washington Post reporter Fenit Nirappil examines Springfield, Missouri's battle with COVID-19 in an article published this week.

According to Nirappil, the delta variant of COVID-19 has been hitting Springfield hard. Nirappil reports, "Springfield, a city of 170,000 nestled in the Ozarks, has become a cautionary tale for how the more transmissible delta variant, now estimated to account for half of all new cases nationwide, can ravage poorly vaccinated communities and return them to the darkest days of the pandemic."

Data from the Mayo Clinic shows how much COVID-19 vaccination rates can vary from state to state. According to Mayo, 71% of Massachusetts residents have been at least partially vaccinated for COVID-19; in Missouri, it's only 46%. Vermont's rate of at least partial vaccination is 74%, according to Mayo. Massachusetts and Vermont are both blue states with moderate Republican governors.

"Experts fear that the surge in Springfield, known as the birthplace of Bass Pro Shops and Andy's Frozen Custard, is a harbinger of tensions to come as people play down the pandemic and refuse to get vaccinated even in the face of overwhelmed hospitals and preventable death," Nirappil warns. "Instead of unifying the community, the surge has hardened divisions, unleashing anger from health care workers fed up with vaccine misinformation and exposing deep antipathy toward the public health establishment."

Greene County, which includes Springfield, has a low vaccination rate.

"The Springfield-Greene County Health Department has prioritized vaccination in a county where only 35% of residents are fully vaccinated, according to data from the Centers for Disease Control and Prevention," Nirappil explains. "Rates are even lower for people in their 20s and 30s. But new daily vaccinations have largely stayed flat through June despite the outbreak's toll, and health officials are battling false theories that the vaccines are somehow responsible for a surge in hospitalizations almost exclusively affecting the unvaccinated."

And while as of yet, deaths reported in the state from the virus remain low, the number of new cases has accelerated in recent weeks.

Howard Jarvis, emergency room medical director at CoxHealth South Hospital in Springfield, told the Post that COVID-19 remains a major threat in his part of Missouri.

"I'm seeing some people in their 30s and 40s that don't have underlying health conditions, and they are very ill with this," Jarvis warned "And sometimes, they're not so ill that they have to be admitted. They may be back in three or five days and do need to be admitted."

Katie Towns, acting director for the Springfield-Greene County Health Department, told the Washington Post, "It's a sad reality that we are facing. I don't think we are coming out of it anytime soon. We are going to see more people get really sick. We are going to see a lot of people die."