8 bizarre places where bodies have been found

Sure a stegosaurus sculpture's leg is the strangest location, but the rest are still fascinating ... and macabre 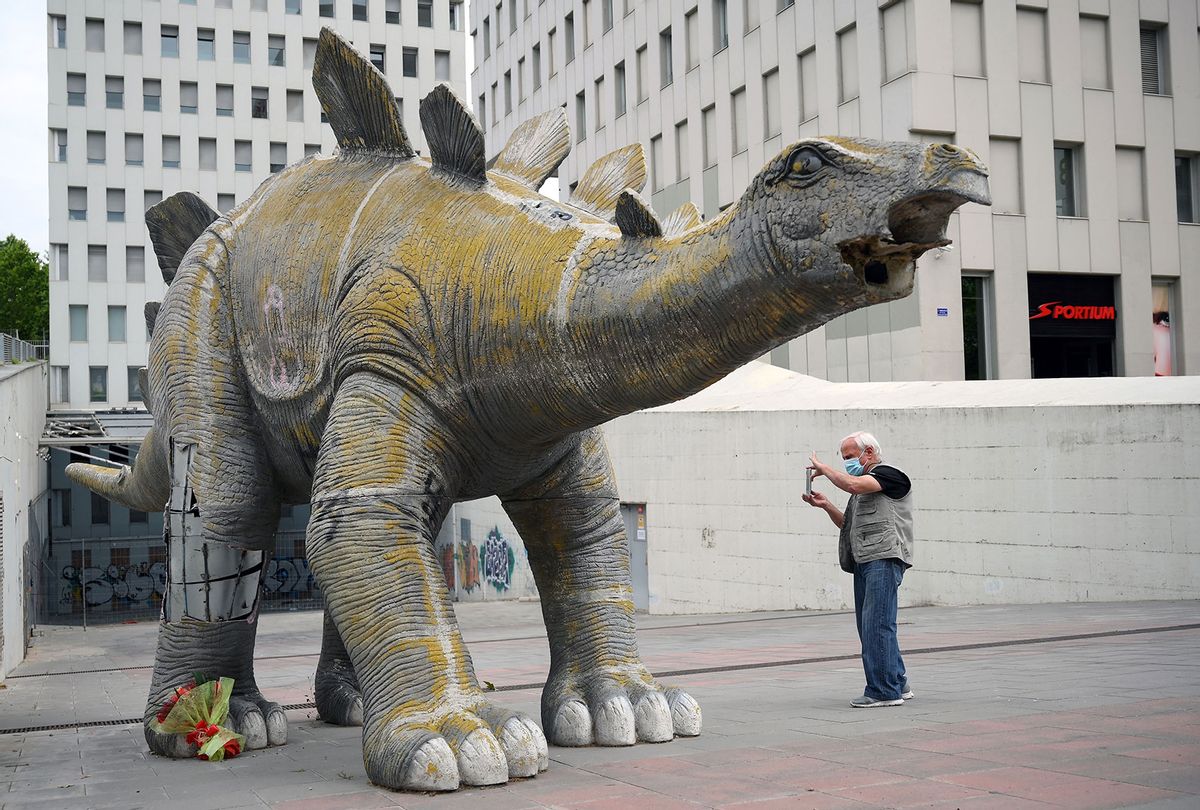 In May 2021, a father and son detected a strange stench coming from a massive papier-mâché sculpture of a stegosaurus in a suburb of Barcelona. They called the police, who, with the help of firefighters, discovered a body wedged inside the dinosaur's leg. Authorities believe the victim had dropped his cell phone into the structure and gotten stuck while trying to fish it out.

The hollow leg of a papier-mâché stegosaurus might be the weirdest place a body has ever been found, but it's not the only bizarre location from the annals of crime and misadventure. From Murphy beds to haunted Disneyland rides, here are eight other strange locations where people came across corpses.

In September 2006, a mummified body was located on the fifth floor of a Los Angeles building where "CSI: New York" was shooting a Season 3 episode (though they were filming on the seventh floor). The plot didn't involve a mummified body, but there was one in an earlier episode that hadn't yet aired. While some people suspected the grisly discovery was a publicity stunt —nicknamed "Corpsegate" — at least two people claiming to be building residents told Gawker Media's Defamer that they believed the story was true, citing pungent odors on the fifth floor. Apparently the man had failed to pay rent, and his body was found when a building employee went to investigate.

When British sexagenarian sisters Mildred Bowman and Alice Wardle failed to return from their vacation to Benidorm, Spain, in 2005, a friend alerted the authorities. Resort employees discovered both bodies trapped between their Murphy bed and its frame, which had detached from the wall and fallen on the bed, suffocating its occupants.

Disneyland Paris's Phantom Manor, filled with fake cobwebs and campy specters, turned seriously macabre in 2016, when employees discovered the body of their co-worker, a 45-year-old technician believed to have been electrocuted while fixing a broken light. It wasn't the only recent death at Disneyland Paris — five years earlier, another employee had died after getting stuck under a boat on the "It's a Small World" ride. It had suddenly started operating while he was tinkering with it.

4. Behind a grocery store cooler

In 2019, when workers moved some coolers away from the wall of a defunct No Frills Supermarket location in Council Bluffs, Iowa, they found the body of Larry Ely Murillo-Moncada. The 25-year-old, who had worked at the supermarket, had gone missing nearly 10 years earlier. It was suspected that he had climbed atop the coolers — a concealed storage space frequented by workers during unsanctioned breaks — and fallen into the 18-inch space between the coolers and the wall. Murillo-Moncada hadn't been scheduled for a shift at the time, so the other employees may not have known that he entered the store at all; and authorities believed the loud thrum of the coolers blocked out any shouts for help.

In January 2015, a person was on a walk at the Squirrel Wood Scout Campsite in Doncaster, UK, when he came upon legs and a torso sticking out of a rabbit hole. They belonged to 50-year-old Stephen Whinfrey, a lifelong rabbit hunter who had suffocated to death after getting stuck in the hole the previous day. His dog, tied to a tree near the hole, was still alive.

6. In a cryotherapy chamber

It's believed that, after locking up Las Vegas spa Rejuvenice one night in October 2015, 24-year-old employee Chelsea Ake-Salvacion decided to use the cryotherapy chamber. When her body was found the next day, it was frozen — but the coroner later ruled that her cause of death had actually been "asphyxia due to an oxygen-poor environment." The nitrogen pumped into cryotherapy chambers to keep them well below freezing also diminishes the oxygen level, which can render you unconscious and eventually dead. Neither of Rejuvenice's two locations had documentation for workers' compensation insurance, and the one where Ake-Salvacion worked wasn't actually licensed to provide aesthetician services, so authorities forced both to shut down.

In the early summer of 2018, Devon Egg called his brother Brian and got his answering machine — the message said Brian was on vacation. Not only did Brian never use his answering machine, but Devon believed the voice on the message was someone else's. Neighbors had begun to report Brian as missing by late July, and the police visited his San Francisco home three times, but left when nobody answered their knocks. Other people were seen coming and going from the house, and in mid-August, a crime scene clean-up van appeared. Again neighbors called the police, who eventually discovered a room whose door was hidden behind a picture. In the room was a fish tank, where they found Brian's body, minus head and hands. Though two suspects living in the house at the time were arrested, they were later released pending further investigation.

8. In a hospital ceiling

In May 2019, while laid up at South Africa's Mahatma Gandhi Memorial Hospital with a broken femur, Sandile Sibiya went missing. An internal search turned up nothing, so the staff reported his disappearance to the police. But soon, "an unbearable stench intensified at the hospital," a health official explained. "Eventually, it led to the storeroom, where fluid dripping from the ceiling provided the tell-tale signs that something was amiss." Sibiya's body was found in the ceiling, but how he got there is still a mystery.