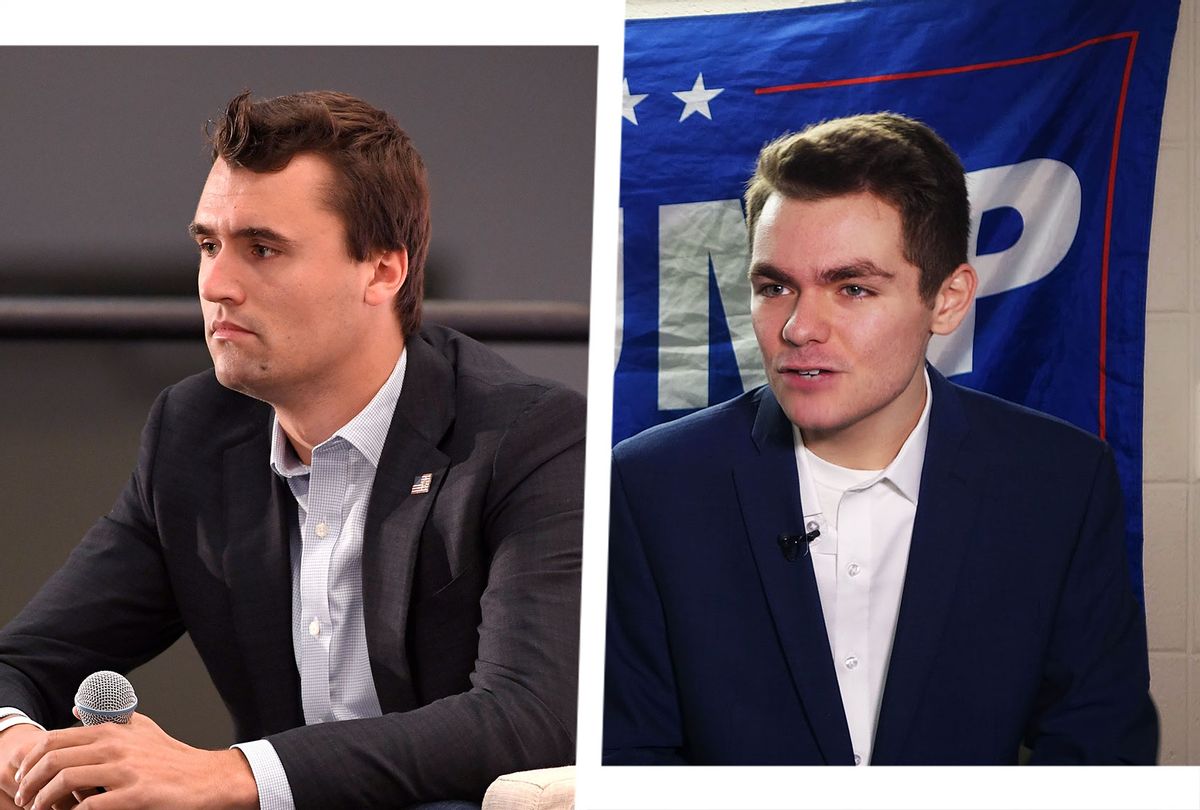 Turning Point USA, the conservative student organization led by Charlie Kirk, kicks off its summer "Student Action Summit" on Saturday morning in Tampa. But the group now faces a battle to ward off white nationalists who hope to infiltrate the gathering, whose headliners include Donald Trump Jr. and former White House press secretary Kayleigh McEnany.

Far-right youth activist Nicholas Fuentes hopes to lead a group of his white nationalist supporters, known as the "groyper army," into the Tampa conference, despite TPUSA organizers' attempts to ban Fuentes and his followers.

After Fuentes' attempts to derail or disrupt the Conservative Political Action Conference (CPAC) event last weekend in Dallas, TPUSA staffers have begun to connect the dots on "groypers" who had previously been invited to the Tampa conference, and are informing them they're not welcome.

One such individual is a 15-year-old ally of Fuentes who often live-streams on the internet and goes by the Twitter handle @OneYoungPatriot. This person was uninvited to the TPUSA summit in an email reviewed by Salon.

"We regret to inform you that your SAS 2021 invitation has been revoked," reads the email sent to @OneYoungPatriot. "This decision is final. This revocation does not impact applications to future events, and we hope that you will consider applying again in the future. Please do not attempt to attend the summit as any attempt to disrupt may affect consideration for future participation." Several other people associated with Fuentes, along with another person who has expressed support for him on social media, were informed this week they would not be welcome at TPUSA's Tampa conference.

In group chats on the messaging platform Telegram, various Fuentes' followers claim they will be at the TPUSA summit, anyways, and have floated the idea of disrupting the event.

"Defidently getting a fat 'groyper' chant going while I'm down there," wrote one user. Another user replied, "Let's link and make it happen." A third groyper responded, "Let's get loud."

Fuentes, who has been accused of being a Holocaust denier over comments he has said were "jokes," didn't return Salon's request for comment.

TPUSA supporters and Fuentes followers have feuded in public over the past two years, beginning in late 2019, when white nationalists appeared on college campuses across the country to challenge Kirk during Q&A sessions.

"The white nationalist groyper movement has long viewed TPUSA as a strategic site for recruiting and spreading their ideology among conservative youth," Lorber said. "Since 2019, the groypers have pursued a dual strategy of publicly pressuring TPUSA to move further rightward while quietly infiltrating its chapters to effect change from within. In the 2021 school year, white nationalist movements like the groypers continue their efforts to target right-wing college students in order to further radicalize the next generation of conservative leaders."

Amid a tirade after his eviction from the CPAC gathering in Dallas last weekend, Fuentes complained about being called a "sexist ... by so-called right-wing women, like, for example, you know, Alex Clark. Man, she is ugly."

TPUSA organizers continue to hawk tickets to the Student Action Summit even as they try to detect possible Fuentes followers and prevent them from showing up.

"LAST CALL on tickets for this historic event," read an email sent out by TPUSA on Thursday night. "Join us July 17th - 20th in Tampa, FL, to hear from the nation's top leaders such as Governor DeSantis, Kayleigh McEnany, Donald Trump Jr., Secretary of State Mike Pompeo, and dozens more. We are near capacity, so don't miss out as we continue to make history with the largest event of the summer!"

It isn't just Fuentes and the groypers who are trying to outflank Turning Point USA on the right. Lorber told Salon that another group of far-right activists is planning a competing "American Populist Union" event, where a loosely affiliated group of extremists and white nationalists will attack TPUSA as fake conservatives or "cucks."

"Leaders and followers of the American Populist Union, most of whom are college-age or younger, slander feminists and LGBTQ people as 'degenerate,' argue for a moratorium on all immigration, view themselves as victimized by 'anti-white hatred' in universities and popular culture, and oppose a conservative establishment they view as weak and ineffectual," Lorber said. "Multiple movement leaders have signaled alignment with and organized alongside Nick Fuentes and the groyper movement. In their private chat rooms and servers, open support for the groypers and their white nationalist agenda isn't hard to find."

The four-day TPUSA event is definitely drawing high-profile speakers from the conservative movement and the MAGAverse, including Fox News host Dan Bongino and Sen. Rick Scott, R-Fla., as well as those mentioned above. Whether it can prevent incursions by far-right extremists and overt racists remains to be seen.