Trump's Big Lie gets an intellectual defense at last — as a Twitter thread, of course

An obscure podcaster goes viral with his "general theory" of the MAGAverse. It's ingenious — but is it really new? 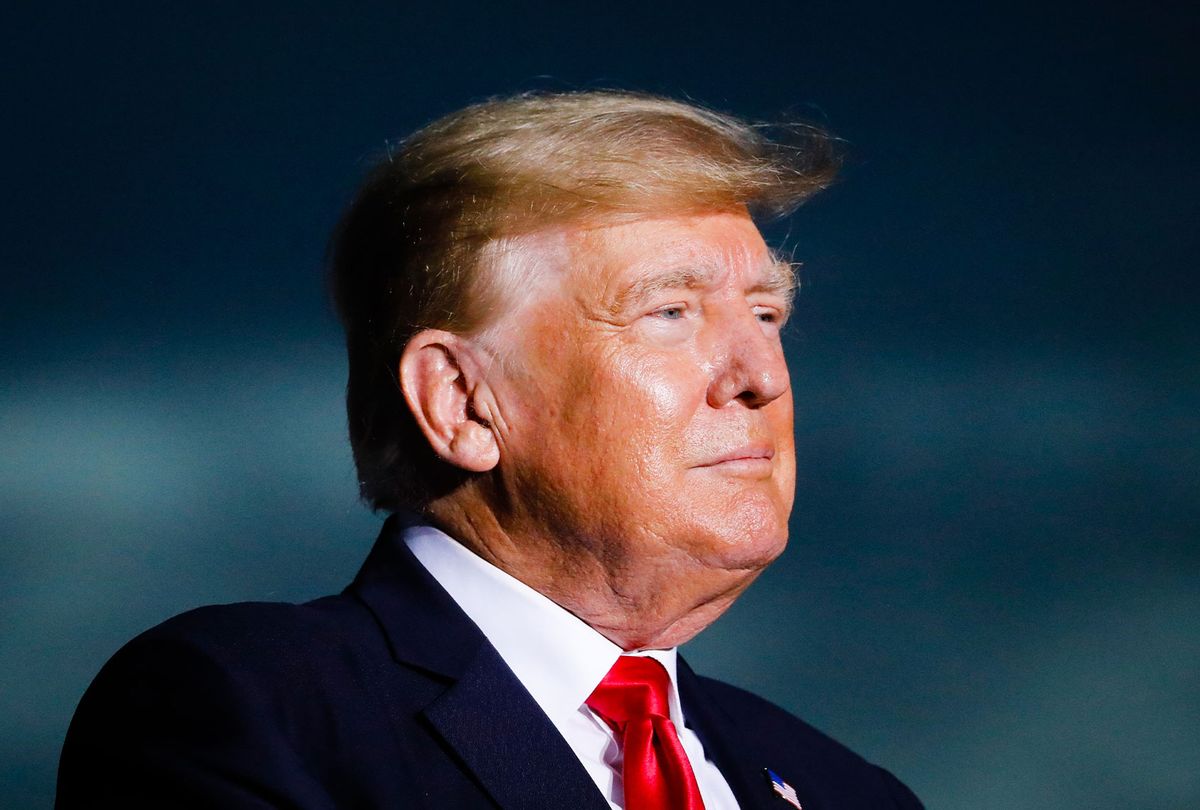 It's probably going too far to suggest that we are entering a new version of the Dark Ages — although anyone who has studied the early medieval period knows it was a lot more complicated than that term suggests. But we are definitely in a new golden age of darkness, or at least of ignorance, superstition and magical thinking, which ought to remind us that the Enlightenment never had as much of a grip on human consciousness as we sometimes pretend.

Anyone who reads contemporary political commentary — or, worse yet, tries to write it — becomes aware of the moral and intellectual hazard involved in constantly announcing that you are right and everyone else is wrong. The more you ridicule others for their blatantly delusional or childish views, the more you feel the gnawing certainty that others are mocking you with the same superior confidence. That isn't exactly what Nietzsche meant about staring too long into the abyss, but as a metaphor it will do pretty well.

Donald Trump's presidency didn't cause any of this. Trump is a symptom and a catalyst — to use more academic language, a signifier and a simulacrum — but too much of an empty container for the fears, fantasies and desires of others to directly cause much of anything. In a sense, Trump has done humanity a service, if we are willing to see what he has revealed: We live in a world long prophesied by philosophers and long dreaded by priests, in which nothing is true and everything is permitted — or, to slice it more finely, where truth has been revealed as a relativistic moral construct, which is what it was all along. (Nietzsche would be pleased about that.)

Like all generalizations, that's not quite right either: Of course we all still believe that certain things are flat-out true and others false. But the universe of agreement about which things are which is rapidly contracting. I'm not here to solve that problem (since it has no solution), but one of its most galling consequences is that it opens the door for the most banal, most cynical and most hypocritical people in the public sphere to say things they know to be false, and then throw up their hands and protest innocence: Who can say! Nobody knows anything!

This week we had New York Times columnist David Brooks, lifetime holder of the Dumbass Who Actually Knows Better trophy, pretending to be mystified that "the left" — whatever he thinks that means — does not support continuing the endless and ruinous war in Afghanistan, by almost any measure one of the worst foreign policy decisions in American history. It's tempting to get sidetracked by this insulting horseshit, which essentially amounts to nostalgia for the early George W. Bush era, when neocons and a few spineless liberals tried to convince themselves that going to war in the Middle East — against unclear adversaries, for unclear reasons and with unclear objectives — was a grand and noble cause that could unite Americans around a renewed sense of mission and purpose.

But Brooks didn't even come close to taking the prize in the Let's Pretend This Is Real category last week, which also saw the arrival of a long-awaited landmark in intellectual history: an articulate defense of the Trump movement's false and delusional claims about the 2020 election, artfully constructed around the admission that many or most of those claims are false and delusional.

I'm honestly surprised it took this long. As Laura K. Field recently explored in a lengthy must-read for the Bulwark, the Claremont Institute, a formerly-somewhat-respectable conservative think tank, has been churning out pseudo-intellectual defenses of Trumpism and the Trumpian Big Lie for the past few years, and stepped up its game around the 2020 election. But Claremont's MAGApologists are a posse of doddering paleoconservatives with expensive educations and no popular audience, desperately trying to reverse-engineer an attachment to the Trump movement. Even when they go all-in, as with Michael Anton, author of the infamous "Flight 93 manifesto," it's rooted in obscure and pretentious right-wing ideology that has nothing to do with why millions of people love Donald Trump. (Anton lasted 14 months in a minor Trump administration post before cycling back to the bush leagues of conservative academia.)

But until last week, Darryl Cooper was a relatively obscure podcaster, clearly on the right but not overtly partisan, who offered mildly heterodox takes on semi-recent history: the civil rights movement, Jim Jones and People's Temple, Communism and the Cold War. He launched a Twitter thread on July 8 by announcing: "I think I've had discussions w/enough Boomer-tier Trump supporters who believe the 2020 election was fraudulent to extract a general theory about their perspective."

That thread went viral to the point that Tucker Carlson read most of it aloud on his Fox News prime-time show, which took up about seven minutes of airtime. It certainly makes for fascinating reading, and at least partly does what it purports to do in illuminating how Trump supporters have come to understand the world. But Cooper's initial tone of detached or disinterested analysis — he's offering "a general theory" of why other people (not him, we infer) think the way they do — totally collapses by the end of his thread, tumbling into the Nietzschean abyss I mentioned above.

As Philip Bump of the Washington Post has noted, Carlson omitted Cooper's concluding tweet, in which he suggests, out of nowhere, that if Trump had won the 2020 election (which Cooper, by the way, never exactly says he didn't), the Deep State might have had him killed: "Trump fans should be happy he lost; it might've kept him alive."

Cooper's argument, if you want to call it that, rests on a number of interlinked claims that are either false or grossly overstated: Conservatives used to have implicit trust in the government and the media (when? In 1958?), but after the entire Russiagate scandal of 2016 turned out to be a Hillary/Demoncrat scam designed to torpedo Trump (maybe 8% true, mixed with massive evidentiary cherry-picking), they lost their innocence and began to see the sinister forces at work in the shadows. No, really, that's exactly what he says: "This is where people whose political identity was largely defined by a naive belief in what they learned in Civics class began to see the outline of a Regime that crossed all institutional boundaries. Because it had stepped out of the shadows to unite against an interloper."

But a great deal of his thread is completely unrelated to either the Russia scandal or the 2020 election, and is just a list of extraneous right-wing grievances that he pretends are unique or distinctive to the Trump era: Liberal media elites, obeying the orders of their reality-shaping overlords, framed Brett Kavanaugh as a gang rapist ("based on nothing," Cooper says), ignored the allegedly devastating revelations on Hunter Biden's laptop and "cheered on a summer of riots," meaning the Black Lives Matter protests of 2020. It's pretty much an old-school Rush Limbaugh or Bill O'Reilly monologue about media bias and all the shocking scandals Democrats are sweeping under the rug, artfully framed so as to appear especially urgent and of the moment.

In fact, the question of whether Cooper has his facts straight — according to you or me or Philip Bump, who seems not to have read the memo about the arrival of the new Dark Ages — is completely beside the point. Bump's Post column offers a good-faith but profoundly clueless attempt to rebut Cooper point by point, almost immediately getting lost in the weeds around the Carter Page FISA warrant and the Steele dossier and exactly what James Comey said when. It's boring! No one cares! Even Rachel Maddow, who really was responsible for muddying the waters with a bunch of far-fetched Russiagate conspiracy theories, has moved on to other material.

Give Cooper credit for doing what the pointy-headed Claremont Institute MAGA-wannabes could never possibly do: He addressed Trump fans (and Trump haters) in their native environment and their native language — on Twitter, that is — and rebranded standard-issue conservative victimology and whining as something brand new as well as noble and courageous, a great rupture with the past justified by a shocking betrayal. His thread succeeds on rhetorical and emotional grounds, not at all on its incoherent and internally inconsistent factual claims (if that's even what they are).

Indeed, Cooper acknowledges late in his thread that after the November election Trump supporters "got shuffled around by grifters and media scam artists selling them conspiracy theories" that were "increasingly absurd," an obvious reference to the likes of Rudy Giuliani, Sidney Powell and Mike Lindell, although he never mentions them by name. True believers of the MAGAverse will have to close their eyes during that part, I guess, to get to Cooper's half-hearted claim that just maybe the entire election should have been thrown out as unconstitutional, based on the pandemic-related changes in voting rules. He admits that no court would ever have done that, but suggests that lack of judicial courage was essentially a function of racist terror: "What judge will stick his neck out for Trump knowing he'll be destroyed in the media as a violent mob burns down his house?"

One could perhaps respond by inquiring how many houses were burned down by violent left-wing mobs in the past year, versus how many times a right-wing mob literally overran the U.S. Capitol, threatening to hang the vice president and the speaker of the House for performing their duties as outlined in the Constitution. Cooper is notably silent on the events of Jan. 6, mentioning them in his first tweet and then never again. It's almost as if he can't bring himself to endorse them, but fears the "violent mob" might burn down his house, metaphorically or otherwise, if he condemns them. But I digress.

That question, however, carries within it the assumption that there is still a zone of agreed-upon truth, and that I — along with reasonable, like-minded readers who still believe in such things — have an enlightened perspective that other people sadly lack. That's precisely the assumption that, as Darryl Cooper eloquently illustrates, we can't take for granted.