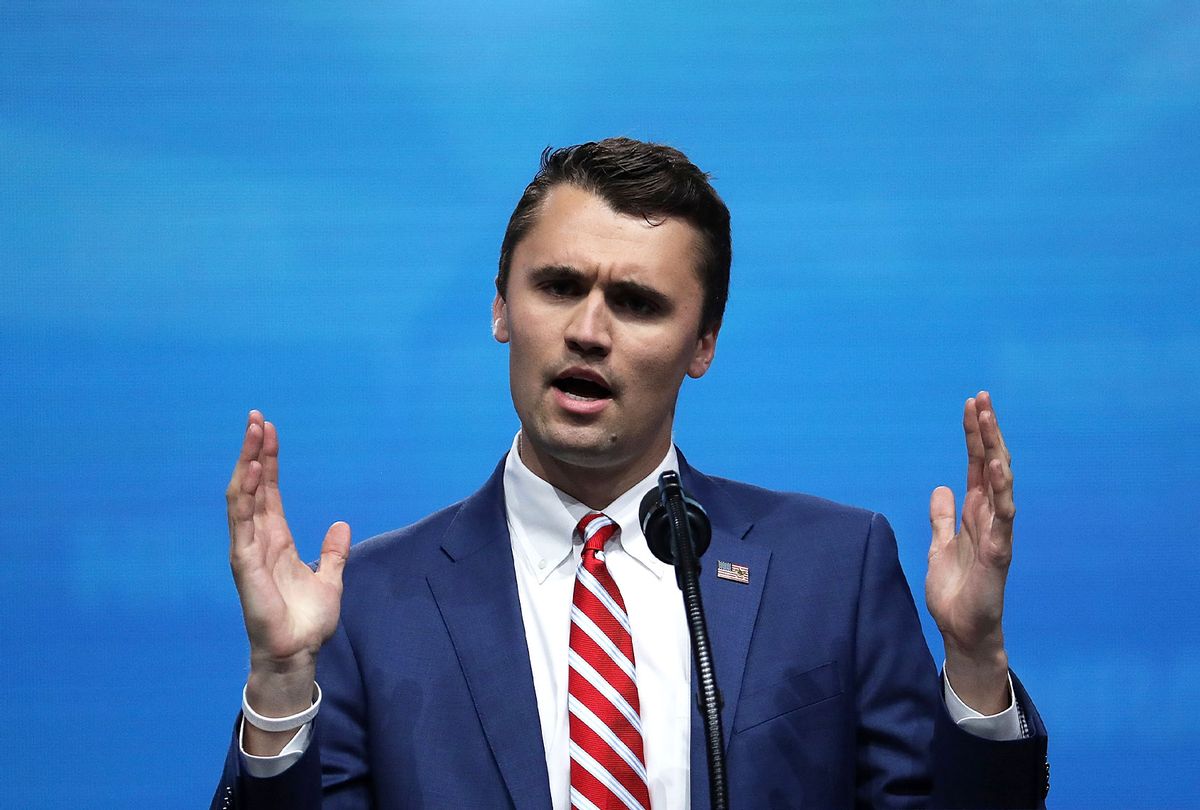 Conservative firebrand and youth right-wing organizer Charlie Kirk has encouraged his young followers to play a "game" based on deliberately making life difficult for TSA employees at airports around the country.

"A 'micro-tyrant' is a term that we came up [with] on our podcast," Kirk said, elaborating that he means "the type of person at Starbucks who has way too much power, that no one voted for, that never ran for office, that will start screaming at you because you have your mask one millimeter below your nose."

Kirk then commenced a lengthy narrative, beginning with a tale about a recent Starbucks encounter.

"I'll tell you a story about a micro-tyrant where I went into a Starbucks in California, and there was like this ridiculous, arbitrary line, and I reached over to go get a straw, and she just comes up to me said, 'Sir, you are contributing to the spread of the killer coronavirus.' ... Because I went three inches. I said, 'No one voted for you, OK? ... You have way too much power.'"

The frequent Fox News guest, known for his bewildering remarks at previous TPUSA gatherings, continued by sharing a different story about how he and his team harass TSA agents as they try to do their jobs.

"I have a TSA story I could go through as well," Kirk began. "There's this woman without a mask, looking at her phone. I try to — by the way, you guys should all play this game alongside of me; it's a lot of fun. It's how far can you get through the airport without them telling you to put on a mask? All of you guys, it's really fun." Kirk then asked his audience if any of them had successfully boarded planes without wearing masks. Some students in the crowd raised their hands, and Kirk responded, "That's awesome!"

Kirk went on to declare that a member of his team had been successful at the "game" and "broke through" at the airport while defying the current federal mandate to wear a mask.

Kirk also claimed that a member of his TPUSA team had been threatened with arrest by a TSA agent, before mocking the agent's authority. "First of all, you have way too much power," he said. "Like, that might be a real badge, but you're not deputized in the name of the law. Like, you don't have handcuffs, you know?"

Kirk concluded by describing the entire "game" as a way to "fight against the little things," adding, "I'm not a big rule person. I like tightly written rules that everyone can understand, maybe 10 or 12."

On Monday, Kirk doubled down on advocating his mask "game," stating that it involved taking a "risk in pursuit of a good thing."