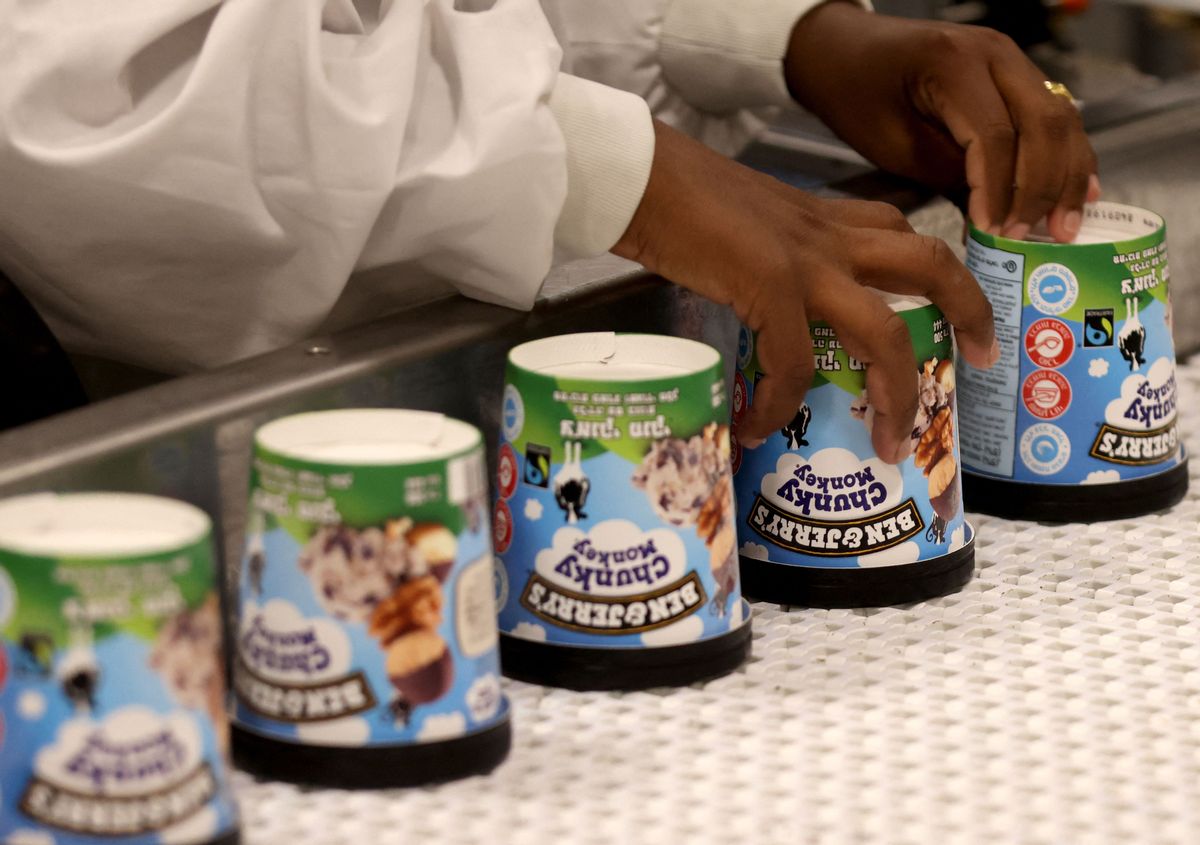 A labourer works on a production line filling ice-cream pots at the Ben & Jerry's factory in Be'er Tuvia in southern Israel, on July 21, 2021. (EMMANUEL DUNAND/AFP via Getty Images)
--

A boycott campaign propelled by GOP officials in several states sprung up this week against ice cream maker Ben & Jerrys, after an earlier decision by the company to stop selling its products in Israeli occupied territory.

The Vermont-based brand, which has a long history of taking socially conscious stances, put out a statement saying it was "inconsistent with our values for Ben & Jerry's ice cream to be sold in the Occupied Palestinian Territory," which included the West Bank and East Jerusalem.

According to the Associated Press, "Israel annexed east Jerusalem after the 1967 war and considers the entire city its undivided capital, though the annexation is not internationally recognized. It says the West Bank is disputed territory and says its final status should be resolved in negotiations. The international community, however, widely considers both areas to be occupied territory."

Both of the company's founders, Ben Cohen and Jerry Greenfield, are Jewish.

Ben & Jerry's has a rather unique agreement with its parent company, the international behemoth Unilever, which allows for the board to take controversial stances. To date, the decision is one of the strongest stances an American company has taken against Israel, traditionally one of America's closest allies.

The backlash was swift, and harsh.

In response to the move, Israeli Prime Minister Naftali Bennett issued a threatening statement, vowing to "act aggressively" against the company — even going so far as to call the targeted boycott "a new form of terrorism."

The decision to stop selling ice cream in what Israel calls "disputed territory" also incensed elected officials in both parties — Biden's White House lamented that Ben & Jerry's was "unfairly" targeting Israel — but especially conservative lawmakers and pundits, who have aggressively aligned themselves with Israel in recent years.

Texas and Florida, run by two of the GOP's most well-known governors, said they are currently exploring harsh actions like a coordinated divestment campaign or even an outright ban.

Both leaders wasted no time decrying the company's original statement.

"Ben and Jerry's decision to boycott parts of Israel is disgraceful and an insult to America's closest ally in the Middle East," a statement from the office of Texas Gov. Greg Abbot Tuesday night read. "Unilever, Ben and Jerry's parent company, must reverse this ill-conceived decision."

Florida Gov. Ron DeSantis placed Unilever under state review, saying "Florida has long had a strong relationship with the State of Israel," adding that, "As a matter of law and principle, the State of Florida does not tolerate discrimination against the State of Israel or the Israeli people, including boycotts and divestments targeting Israel."

More than 30 U.S. states have laws on the books prohibiting pension funds from investing in companies that refuse to do business with Israel — though it's unclear if Ben & Jerry's action this week qualifies, legally speaking. In its original statement, the company said it would not renew its local license with a longtime Israeli partner — but agreed to continue selling its products in the rest of the country "through a different arrangement."

Nevertheless, Republican officials in both Florida and Texas both said they were discussing what recourse to pursue against the ice cream maker, including a potential divestment of state resources. Texas State Comptroller Glenn Hegar even went so far as to suggest a statewide ban of the company's products.

Fox News also repeatedly railed on Ben & Jerry's for the action, with many hosts calling for viewers to stop purchasing the brand.

"I wish we could return to the days where companies sold products instead of virtue signals," Fox host Tomi Lahren lamented. "I don't believe in cancel culture, but it is time to look at these companies and say, 'what exactly are you standing for?'"

It wasn't the first time the network has railed against the staunchly progressive company, with another recent controversy igniting over Ben & Jerry's Colin Kaepernick-named ice cream, which sought to celebrate the former NFL player's protest against police brutality.

AirBnB also found itself in a similar situation just a few years ago when the online home rental company announced in 2018 that it would no longer list properties in the occupied West Bank. The company reversed its decision just a few months later in the face of harsh criticism.