Bunny the "talking" dog is reporting her dreams, opening up a scientific debate 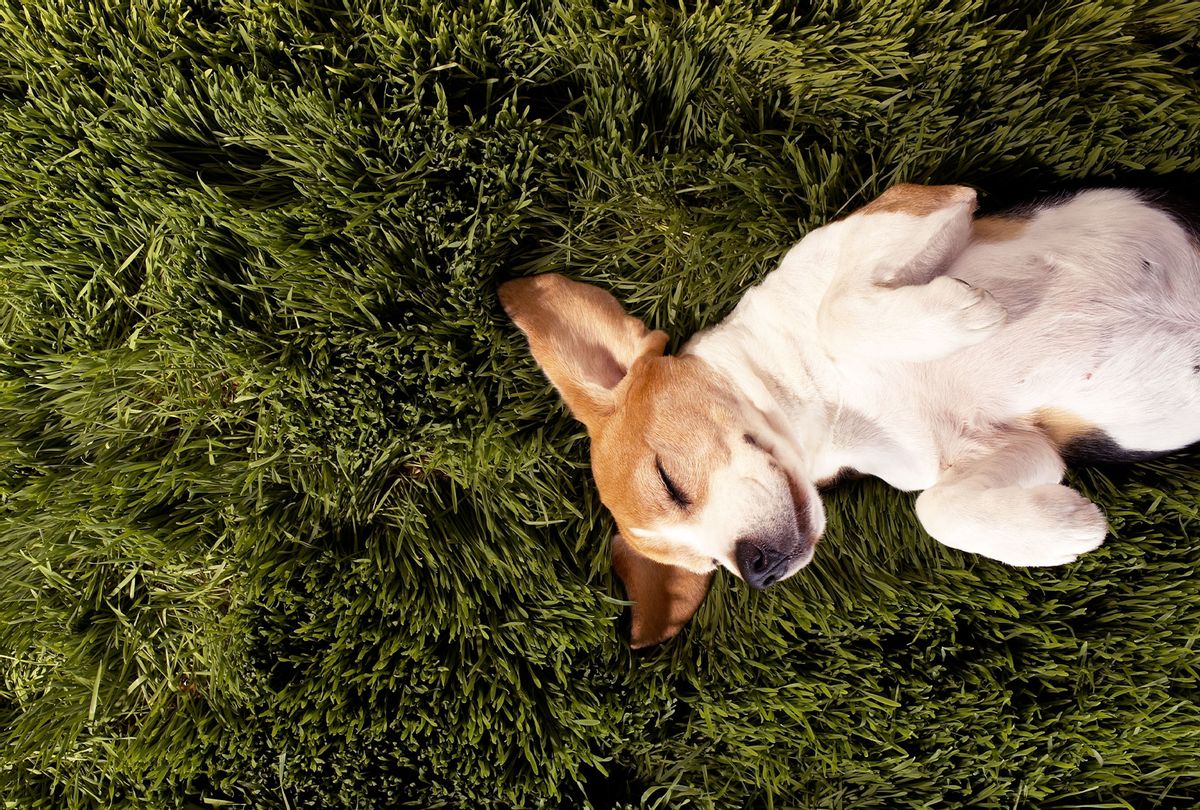 Bunny, TikTok's beloved "talking" Sheepadoodle, never fails to stun her followers. From asking for play dates with dog friends on her augmentative and alternative communication (AAC) device to posing existential questions, it appears that the more Bunny talks, the more insight we gain into the minds of dogs.

Of course, as Salon has previously reported, it is unclear (scientifically speaking) whether Bunny has been trained to use specific buttons on her AAC device, a sound board made up of buttons with a different word vocally recorded on each, or if her communications are actually spontaneous. While the videos posted by her human parent Alexis Devine on Tiktok are mesmerizing, a recent one sheds light on something scientists know little about: what dogs dream about. In the video, Bunny is clearly in a deep sleep, kicking her paws and making soft noises, as though she is deep in a dream state. Devine wakes her up and asks: "What talk sleep?" to which Bunny replies, via the AAC device, "stranger animal."

Is it possible that Bunny was having a nightmare about a "stranger animal?"

Leo Trottier, cognitive scientist and founder of How.TheyCanTalk Research and developer of the FluentPet system Bunny uses, is blunt about it: "We don't know," he says. The project Bunny is a part of includes at least 2,600 animals — including dogs, cats and a few horses. Participants receive instructions on how to set up their AAC buttons for their pets and their human parents set up cameras to constantly monitor the animals when they are in front of their boards. The data is sent to the lab so that researchers, like Trottier, can examine what they say. While Bunny is one of the most advanced subjects in the study, Trottier isn't entirely convinced Bunny is reporting back her dreams. However, he admits he finds her behavior very "intriguing."

First, before the aforementioned interaction was published on social media, Trottier says Devine sent him multiple videos where Bunny was stringing the words "night talk sleep" together —  in the morning, right after she woke up.

"This appeared to be an entirely novel combination of buttons that we hadn't seen before, so we were confused about what it meant," Trottier said. "At the time the most intriguing interpretation — I don't know if that means it's the most likely one, but certainly to me it was the most intriguing interpretation — was that it might have been Bunny wanting to try to communicate about dreams."

Trottier said he suggested that Devine wake up Bunny the next time it happens.

"Bunny appeared to first respond as though she had been asked the question, which in and of itself is interesting, and then she did respond with a report that would be consistent with if you were ostensibly having a dream," Trottier said. "Her behavior is intriguing and appears to be consistent with what we might expect if she were, but significant work would have to be done to figure out if she is reporting on her dreams at all, or instead doing something entirely unrelated; and if she is dreaming, whether what she apparently reports to be dreaming about is in fact accurate."

Technically, Trottier and his colleagues aren't studying dog dreams, which would be very difficult to do. That's partly because not much is known about human dreaming, and the barriers to studying dreams are even more challenging when it comes to animals.

"In general, animal dreaming is very difficult to interrogate," said Matthew Wilson, a neurobiology professor at Massachusetts Institute of Technology's Picower Institute for Learning and Memory. "And that's simply because dreams are based on assessment of recall content."

Wilson, who co-authored a groundbreaking study that found that rats dream and they replay memories while they dream, said there is a lot known about the structure of canine sleep. For example, dogs do experience rapid eye movement (REM) sleep, a state that's associated with dreaming in humans. In 1977, scientists studied the electrical brain activity of six dogs for 24 hours and published their findings in the journal Physiological Behavior. They found that dogs spent 12 percent of that span in REM sleep, 21 percent of that time drowsy, and 44 percent of that time alert. They also spent 23 percent of their time in slow-wave sleep, which is the deepest kind of non-REM sleep.

"In rodents, rats and mice, we can confirm that there is some trace of experience during the day that gets replayed during sleep in a manner that looks a lot like dreaming," Wilson said. "So, it seems to replay experiences as they occur, not just snapshots, but the sequences are much like movies . . . they experience patterns of brain activity that look like the animals actually running in the maze during sleep. Parts of the brain that would be responsible for imagery, or seeing things during wakefulness, those also get activated during sleep."

Could it be possible that Bunny was dreaming about a strange animal she encountered during her wakeful hours?

"There's no reason to believe that what you see in a rodent would be any different than what you would see in a dog or cat," Wilson said. What is more of a mystery is if animals have confabulating-structured dreams — similar to when humans dream of something they didn't do in real life, like fly or teleport. That is very difficult to study because that would require communicating with the animal, who would have to recall their dream.

"The only way we have to verify the content is to compare it with brain activity that they've actually experienced," Wilson said. "So in a sense we can only see or detect dreams that correspond to an awake experience."

Wilson said he believes canines have "all the ingredients for it," but it would be obviously difficult to study or prove.

Indeed, researchers suspect speculation on Bunny's dreams may thus be a bit premature.

"With Bunny's button use, there are more fundamental questions — such as, does she even know how to properly answer a question," How.TheyCanTalk's Trottier said. "That would normally come before being able to make any kind of investigation of Bunny's dreaming reports."