Thanks to a gravitational trick, astronomers observed light from behind a black hole 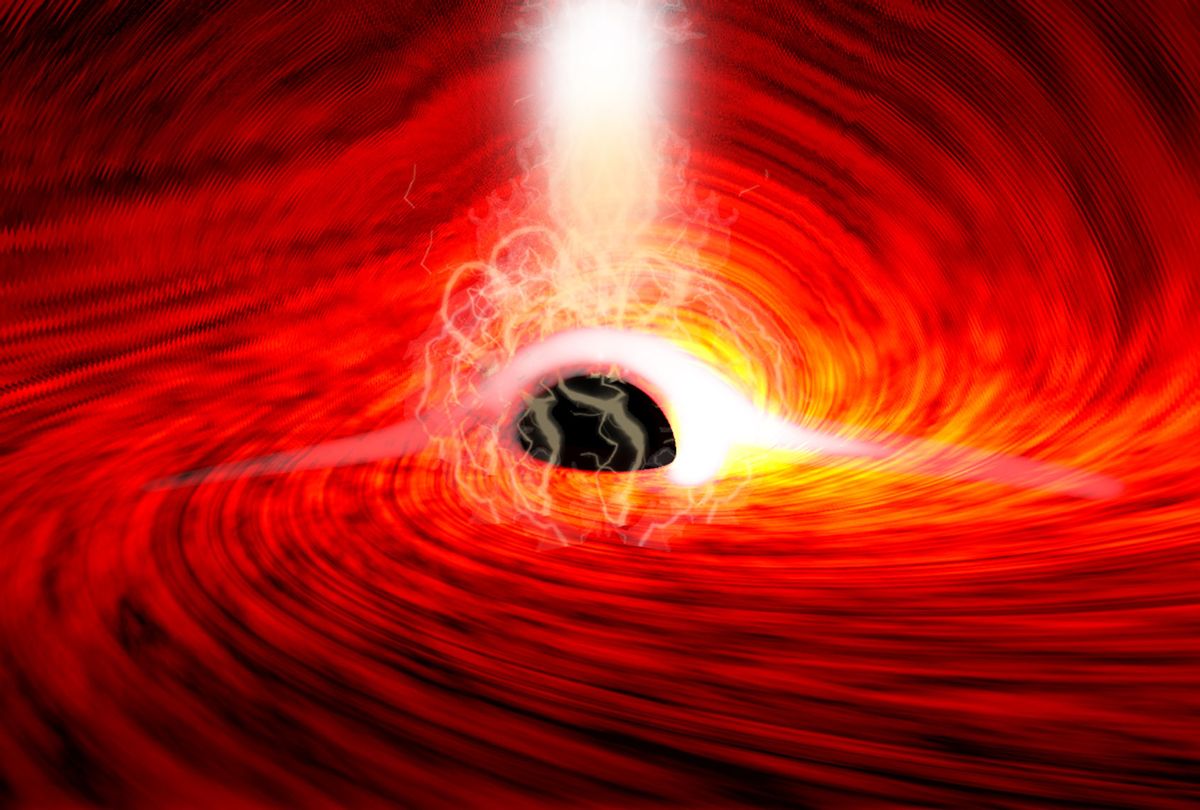 Researchers observed bright flares of X-ray emissions, produced as gas falls into a supermassive black hole. The flares echoed off of the gas falling into the black hole, and as the flares were subsiding, short flashes of X-rays were seen – corresponding to the reflection of the flares from the far side of the disk, bent around the black hole by its strong gravitational field. (Dan Wilkins)
--

Stanford astrophysicist Dan Wilkins and his colleagues were studying a supermassive black hole when something caught their attention—​​ a series of bright flares of X-rays. The emission of such high-energy photons from a black hole was intriguing, but not necessarily unprecedented. Yet it was interesting enough for Wilkins to take a closer look.

When he did, Wilkins noticed additional, smaller, flashes of X-rays that were different "colors" than the bright flares. They also appeared to be delayed. This was strange, Wilkins said, as they expected the smaller flashes to be an "echo" of the first flashes.

They set about measuring the color of these X-rays, and the delay between them and the initial X-ray flash.

But black holes do not eclipse light the way a moon or a planet might. Because of their intense mass, light bends and curves around them, like cars driving on a straight street suddenly swerving around a pothole.

It turns out that what Wilkins and his team observed is the black hole warping space, and bending light around itself. (The research is detailed in a paper published July 28 in Nature). Though predicted by Albert Einstein's theory of general relativity, it has never been confirmed on such an extreme scale — in this case, astronomers detecting light [in the X-ray spectrum] being bent from the opposite side of a black hole.

"This means that these echoes of X-rays from the far side of the black hole don't have to travel through the black hole for us to see them," Wilkins said. "They can actually get bent around the black hole, which is why we can see them."

X-rays are typically observed when gas falls into black holes. Yet in those cases, the X-ray emissions are not from the black hole itself (from which light cannot escape) but from matter interactions near the event horizon, where particles can be accelerated to relativistic speeds and, in collisions, spew tremendous amounts of high-energy particles in all different directions. Typically, astronomers only observe these directly — they had never observed them as they were bent from the opposite side of a black hole, the researchers say.

"Fifty years ago, when astrophysicists starting speculating about how the magnetic field might behave close to a black hole, they had no idea that one day we might have the techniques to observe this directly and see Einstein's general theory of relativity in action," said Roger Blandford, a co-author of the paper and a Stanford professor of physics, in a news release.

Avi Loeb, the former chair of the astronomy department at Harvard University (2011-2020) and founding director of Harvard's Black Hole Initiative, told Salon via email the paper is "interesting," though he questioned whether such an event had been observed previously in 2019.

Loeb added that this was confirmed previously when the Event Horizon Telescope "obtained an image of the ring of light around the silhouette of the giant black hole in the galaxy M87." That image was famous for being the first direct image of a black hole, and was painstakingly produced after years of study and data analysis.

"That ring was also produced through bending of light by gravity near the black hole," Loeb noted.

Whether or not you are a stickler about the precise definition of "behind a black hole," the new study is historic in that there have been few such observations in astronomy history. Indeed, there is much to learn from a direct observation of black holes bending light, as black holes emit some of the most intense gravitational and electromagnetic fields of anything in the universe.

But is there any way this incredible observation could have been a fluke? Wilkins doesn't think so.

"When we analyze the data, we try to rule out every other possibility, so we think about any other theories or any explanations that could mimic the same result," Wilkins said. "This bending of light around the black hole is the only thing we know off in the laws of science as we understand that's able to explain this."