How does a show called “FBoy Island” get made? The show's creator spills the tea

"Right off the bat, most places are simply not going to make a show called ‘FBoy Island,'" Elan Gale told Salon 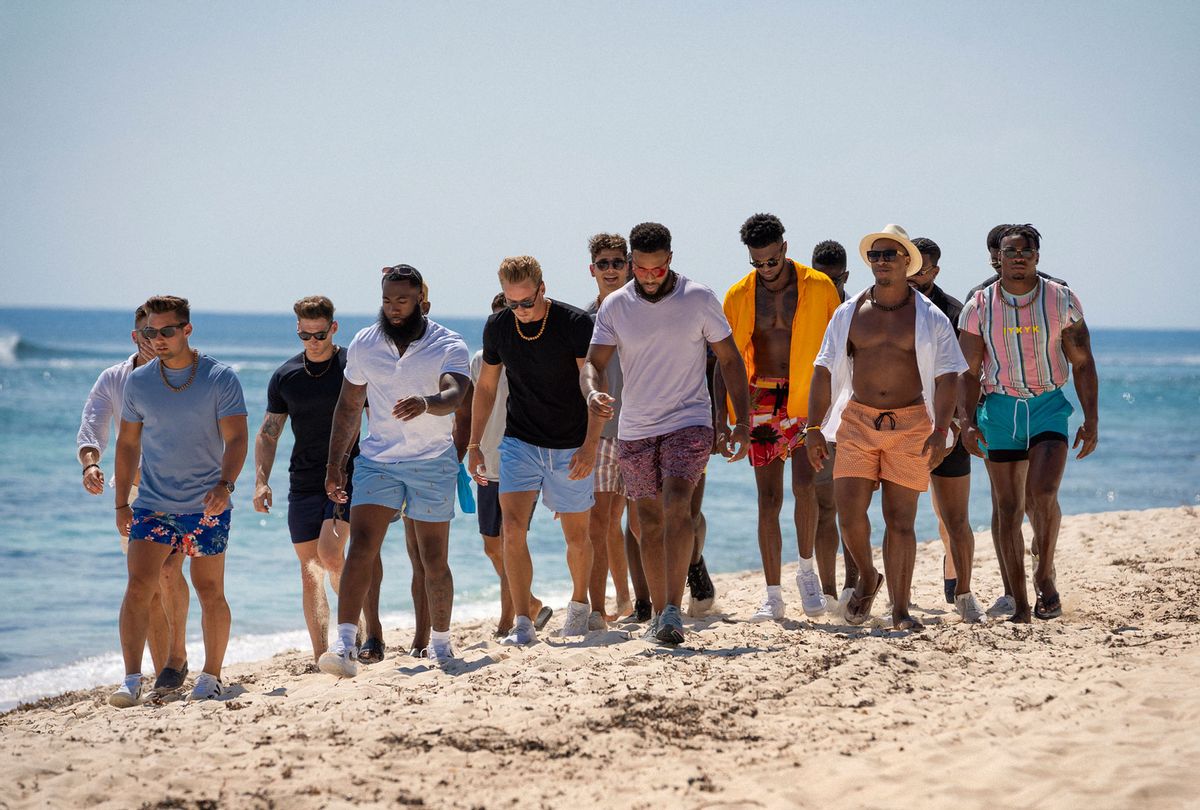 HBO Max's new series "FBoy Island" debuted as the most-watched reality series for the streaming service in its first weekend, and it's not hard to see why it's so compelling. The twist on the dating series sets up three single ladies and host/comedic spirit guide Nikki Glaser, to parse through 24 men and distinguish the self-identified fboys from nice guys as they try to charm their way to a relationship  — and possibly win $100,000 in the process. But how did such a provocatively named show come to be?

The concept, not to mention the outlandish title itself, is titillating in how it pushes against established shows like "The Bachelor" that perform all the puritanical pageantry of seeking marriage and true love. Series creator Elan Gale, a producing alum on "The Bachelor," conceived of "FBoy Island" as the natural direction for dating shows in the age of Tinder and an accurate onscreen encapsulation of the minefield that is modern dating.

"One thing I kept noticing in my day-to-day life – and I don't know if it's just the people I hang out with – is people kept referring to people they went on dates with as f**kboys," Gale told Salon in an interview. "It's been a thing where you hear it, and you wonder if there's a dating show that's reflective of that part of dating culture, swipe culture, ghosting culture. Yet I felt there wasn't a place where people were opening up that door, and talking like how they talk behind closed doors about the fboys that ghost them."

Gale wanted to bring that underexamined experience to the screen. "On dating shows, what the leads are presented with is, there's a number of people and they're all really great. But for those of us who have dated, we know the dating pool is usually like, Here's a number of people, some are great and some are not,'" Gale explained. "That's a reality we all know, we've all experienced that one way or another.

"So we thought, let's just make that show — what people actually experience as young people dating right now. People that aren't with you because of who you are, but want something from you. You meet people, everyone puts their best foot forward, and they think, 'Is this person really into me, or is this person just a f**kboy?'"

Gale and his team knew the show was a risk, given its candor, its subversion of the greater dating show genre, and, of course, its title. They went for it, anyway.

"We decided to swing for the fences," Gale said. "Let's just go with it, let's do a big swing and see if someone wants to play in the sandbox. And luckily, we live at this moment in this amazing age of streamers. HBO Max stepped up and said let's do something crazy, and they let us do it."

Today, relationship exclusivity isn't a given while dating, and often requires an explicit conversation to establish, but not before a period of time spent guessing what the other person wants. Dating apps have become a breeding ground for the "f**kboy," who has no intention of being in a relationship and usually isn't particularly honest about this.

Some apps like Hinge have options for users to answer a question on their profile about what they're looking for, though many users treat the prompt as a joke with answers like "my keys." But most apps don't pose this question at all, and set up plenty of users either for one-night stands that they may not realize will be one-night stands, or long-winded, painful guessing games.

"FBoy Island" is a dating show that's meant to capture this reality on camera — and hopefully reform a few fboys in the process.

The bold concept of the show was one hurdle — its raunchy name was another, in itself. Gale says the team initially tried to brainstorm other titles for the show, but nothing stuck.

"Over time, we were thinking, 'Can we call it something like Nice Guys vs. Bad Boys?' But nothing sounds good in there," he recalled. "Every time we started trying to think up a new title, it just felt like this is a worse version of 'FBoy Island."

Today, we know the bold name choice paid off, but Gale still believes "right off the bat, most places you can make a TV show are simply not going to make a show called 'FBoy Island,' and I totally understand that."

With the name of the show squared away, what followed was philosophical discussion about the labels the male contestants would select for themselves, as "nice guys" and "fboys." According to Gale, these labels of "nice guy" and "fboy" aren't meant to be moral indictments of the contestants.

"Just because you're nice doesn't mean you're necessarily good," Gale explained. "And frankly, I'm not sure having fboy tendencies necessarily makes you objectively bad."

Specific to the goals of this show, a "nice guy" is just a man who partakes in dating to find a relationship and meaningful connection, and is honest about his intentions — whether he's a good person or not isn't relevant to this categorization. Likewise, "fboy" describes someone's approach to dating, not their morality. If an fboy is honest about his intentions and that he isn't looking for a relationship, he could very well be a better person than some racist, homophobic "nice guy" who is looking for a relationship. Of course, often in real life and certainly on "FBoy Island," honesty is antithetical to the fboy lifestyle, as fboys on the show attempt to camouflage among "nice guys" in the hopes of cashing in.

Already on "FBoy Island," there are quite a few signs of "nice guys" who may have "nice guy" intentions by the parameters of the show, but as Gale notes, aren't necessarily good people. In the first episode, so-called nice guy Garratt Powers is eliminated for pretty creepy, overbearing behaviors and coming on too strong to Nakia. As she calls him out on this, he deems this the perfect time to inflict on her a reading of a romantic poem he wrote himself. Sure, the man may be looking for a relationship, but his simultaneous self-identification as a "nice guy" and glaring lack of respect for women's boundaries speaks volumes.

Once the concept was greenlit, Gale says he and HBO Max were confident that the key to the show's success would be finding the right host. "It has to be someone who's smart and quirky, interesting, and opinionated, and a fan of these kinds of shows, because we want them to act as a surrogate for the audience, to ask the questions hopefully audiences will be asking at home," he said.

Comedian Nikki Glaser came to mind immediately, then. She's known for her frank and sex-positive standup, and she's clearly having a blast calling out the ridiculousness on the show.

"I called her, I said I'm doing something really crazy, making a show called 'FBoy Island,' and she just said yes," Gale recounted. Of course, he says at the time Glaser thought the invite was to be a contestant on the show, but she seamlessly assumed the role of host and executive producer despite the initial mix-up. Glaser reportedly played an indispensable role in the making of the show, writing her own hilarious lines, and setting the show's distinct comedic tone.

According to Gale, casting the show's three female leads – Nakia Renee, CJ Franco and Sarah Emig – was all about finding women who were willing and able to be expressive and totally honest about their feelings, both positive and negative. It was also key that they'd had experience dealing with fboys, knew what to look for, and knew what they wanted.

Most of all, it was essential that the women "got along."

"We didn't want a show where the women were fighting each other over these men. The women here are the catches," Gale explained. And so far, at least three episodes in, Nakia, CJ and Sarah seem to not just get along, but work well as a team, looking out for each other, reading the signs, and helping each other sniff out the signs of an fboy. CJ even established the laughable code word "pterodactyl" as a cry for immediate help from her two dating colleagues.

For the roles of host and leading ladies, the choice was simple. Choosing the 24 contestants? Not so much. Casting men who identified as nice guys and fboys required some tricky maneuvering.

"We cast the show, the group of men, as two separate shows," Gale said. "So, the casting calls were different, the entire interview process was different. In the casting of nice guys, we treated it as a very traditional dating show, where we were really looking for the people you would put on any dating show where you wanted to present guys with their best foot forward."

As for casting the self-identified fboys, Gale says they "cast as if we're looking for guys who want to be on a fun summer show, meet women, bro out, have fun on an island."

How the two groups are eliminated further delineates their separate experiences. When fboys are eliminated, they're forced to cool their heels at a bus stop, where they eventually get drivent to "Limbro." The outdoor enclosure that looks like a tropical junkyard is basically an unglamorous reform school of sorts that involves the occasional therapy sesh with Glaser. In contrast, expelled nice guys get to live it up at the "Nice Guy Grotto" seaside resort complete with pina coladas and fruit they don't need to forage themselves.

Between psychological investigations of the so-called hottest guy from Ohio (not exactly the most generous compliment), and other equally tempting prospects, and even at times thought-provoking "therapy" sessions for castaway fboys, "FBoy Island" is a dating show with plenty of tricks up its sleeve. Those who judge and underestimate it for its name are doomed to miss out on its bold and insightful charms.