It's hilarious. It's cynical. It's the rare reality show that plays up the true artificiality of TV love quests 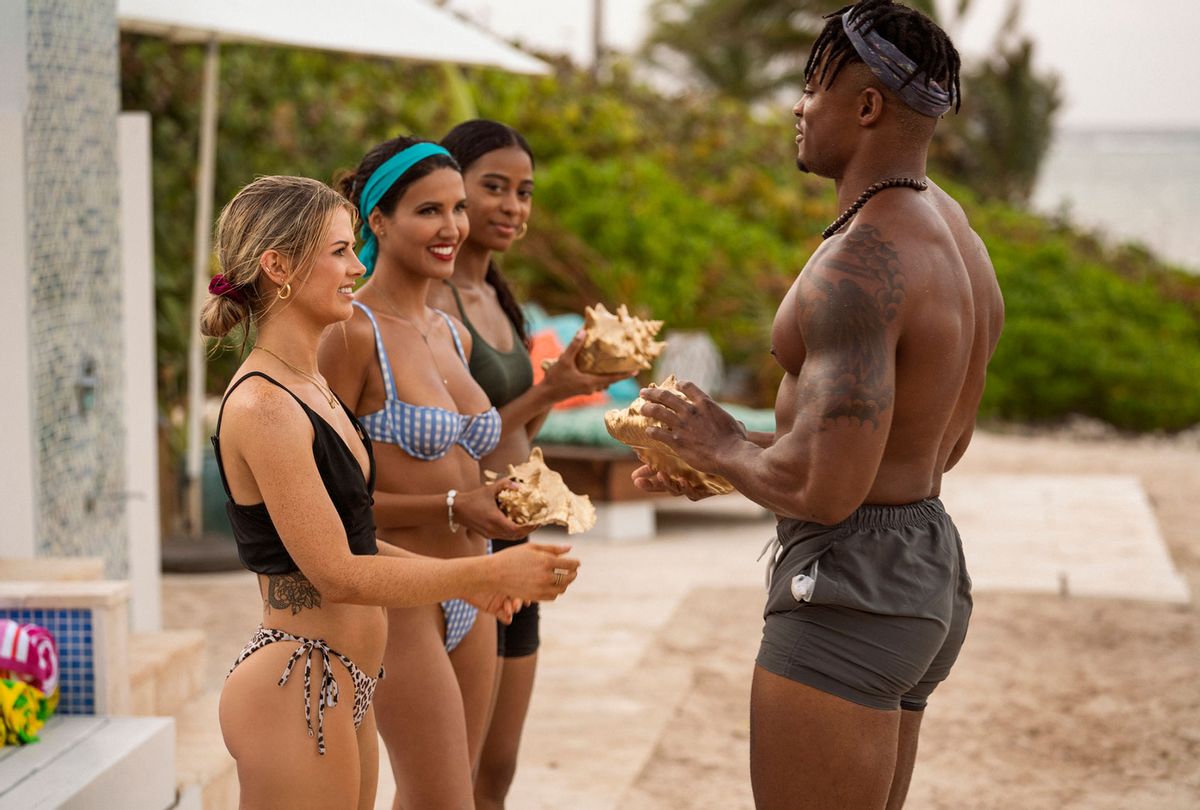 From the description on the press release, its plotline lifts from the 1997 rom com classic "My Best Friend's Wedding," replacing Julia Roberts' adorable heterosexual saboteur with a guy named Terry, described as "gay and awful."

"FBoy Island" would appear to have little in common with "Bridesman," which is entirely scripted, consists of episodes ranging from six to 10 minutes long, and is designed to appeal to quick-hit content consumers. I haven't seen "Bridesman" and therefore cannot tell you whether that's true.

What's plain as day is that "FBoy Island" flaunts its identity as the messy, issues-burdened lovechild of dating app culture as brightly as a neon wristband. You might not be able to tell that from the advertising, which makes it look like a weird stew of every other romance reality show you've ever seen: "The Bachelor" and its spinoff "Bachelor in Paradise" are its main inspirations, but it also incorporates the tongue-in-cheekiness of "Love Island," (obviously) "Temptation Island," (again, duh) and "Too Hot to Handle."

Why aspire to mimic one show when you can be all the shows, tossing in a few teaspoons of "I've Got a Secret" and "To Tell the Truth" with a shot of "Joe Millionaire" and, here's a deep cut for you, "The Joe Schmo Show"?

Nearly everything in popular culture cycles back to something else, eventually. This is neither a penalty nor the sole point of congruity "FBoy Island" shares with Grindr and the general outlook of dating app consumers, or even what makes the HBO Max series extraordinary.

For that, I tip my hat to another common trait shared by the app and the show: both are incredible feats of social engineering that refuse to cloak the transactional nature of electronically enabled modern matchmaking in the trappings of "love," use of quotes intentional.

Most would-be suitors who audition for "The Bachelor" or "The Bachelorette" aren't really searching for love, regardless of whatever noise they make about journeys or being there for "the right reasons." The main prize they're trying to land is massive media exposure.  That a few Final Rose recipients have gone on to have real-world relationships and marriage is pure luck . . . and perhaps another career-boosting strategy.

Meeting the "FBoy Island" girl group that is Nakia Renee, CJ Franco and Sarah Emig more than confirms this. Nakia is a singer songwriter and stylist. Sarah is a social media manager and branding consultant. CJ is a model and "content creator."

Out of the three Franco is the greatest drama amplifier. Relatedly, she also has the largest Instagram following, with more than 514,000 fans and counting. She displays a uniquely performative level of camera awareness, especially when a guy goes in for a kiss only to find himself nose to nose with a kaleidoscope of pornographic facial expressions.

Comedian Nikki Glaser, the show's host, doesn't introduce her or the others as influencers, but she doesn't put them out there as princesses looking for their prince, either. The show is up front about being a game above all else.

The trio's mission in this sandy paradise is to see how sharp their bulls**t detectors are, because out of the 24 men placed before them for sorting, 12 are self-described "Nice Guys" and the remaining dozen are "FBoys." The ladies mix with the males of the species and only find out who is which after the men have been eliminated.

If they happen to find a relationship out of this mess, big ups to them. But that's not the point for the men. The last men standing have a chance to win $100,000, presumably extra incentive for an FBoy to hoodwink one of the women into thinking he's a nice guy.

That ruthlessness is a selling point, no doubt, and one of the reasons "FBoy Island" stands to lure viewers who wouldn't ordinarily watch a show like this. Glaser's participation should be a draw as well, especially among those familiar with her sex-positive comedy. When she's at her best, her humor relies less on pure raunch than a pointed wryness about the many miscommunications between men and women in moments of intimacy.

In "FBoy" she's as much of a curious observer about what's happening as she is jaded about the entire sideshow nature of it all, dismissing the Nice Guys with only slightly less vinegar than the FBoys.

As the season progresses, however, Glaser slowly transforms from non-partisan witness into an administrator of tough love and a harsh judge. In some instances she's as unforgiving to the ladies as she is to the men doing them wrong, but that's rare. Her standard approach is to drive home to the guys that they're not the ones who matter. Sometimes she metes out twists that are so harsh, but justified, that the person on the receiving end of one asks if Ashton Kutcher is about to come out and tell him he's on "Punk'd." (The answer is no.)

Although the show tags the FBoys as the main peril, many of the pickles Nakia, CJ and Sarah find themselves in are results of unwise decisions that would only fly on a TV show like this. Knowing a guy is nice doesn't necessarily give him an edge if the women don't think they look hot enough together to be featured in Maxim.

That's not an attempt at cleverness on my part. One of the contestants says this out loud as a selling point. There are as many such utterances over the course of the 10 episodes of "FBoy Island" as there are passages where behind-the-scenes machinations are apparent, calling attention to the unrealness (and "UnREAL"-ness) of the entire enterprise. Nobody in the show wants to be rejected, but even more importantly, none of them want to lose.

But that only makes the show honest in its artificiality, thereby absolving viewers of any shred of guilt about judging its participants, and ourselves for being taken in by supposed nice guys who end up being jerks. Some reveal their true misogyny through their actions . . . and the women shrug it off anyway, confident that they can change their pursuers' womanizing ways. Which totally happens, like, all the time!

The entire modern reality genre proliferates from TV "experiments," starting with "An American Family" and later, MTV's "The Real World" and CBS' "Survivor." All of these series invite audiences to view the observer effect in action, noticing the subjects' behavior changing before our very eyes to suit the perceived requirement that we be entertained.

"FBoy Island" reduces this concept to a strange candy. It's for people raised by shows like this in a world full of cameras observing them. But it also validates every critique of these shows along with the gamified pursuit of romance or hooking up based purely on image and the shallowest of connections.

It's a longform study of bad human decision-making while drunk on an emotional craft cocktail that might as well be named "I Can Fix Him." And for anyone who has shunned the whole "Bachelor Nation" discourse, it's something you may never have expected to discover in this TV genre: a good match.