Reality TV never reflected our reality, but watching it these days sparks a few unexpected emotions

The heightened fantasy of reality TV plays different in an era with fewer options, more anxiety, and endless dishes 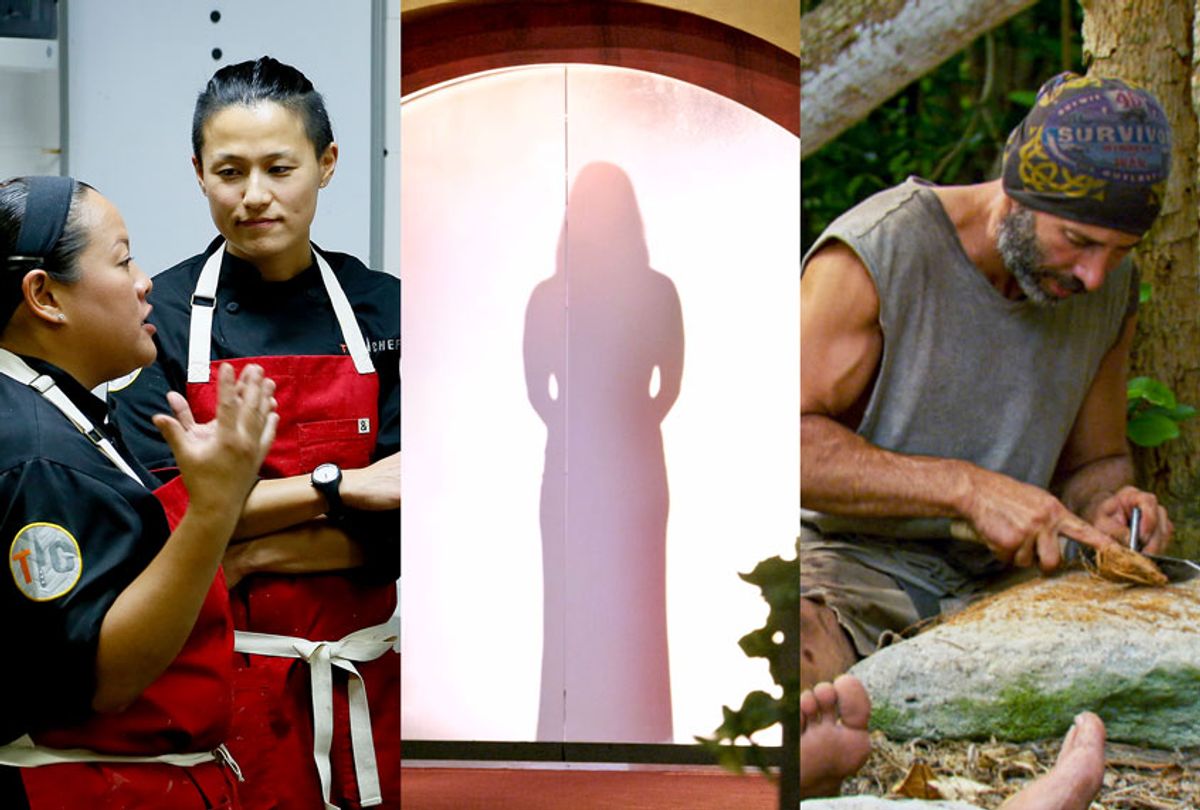 A recent evening began innocently enough, with the spouse and I settling down for a little Netflix with a side of dinner. On deck were episodes of "Nadiya's Time to Eat," Nadiya Hussain's bright and jaunty cooking series featuring accessible recipes for home chefs.

Nothing could have been more harmless or salubrious, or so I thought. How bad could it be to spend time with our favorite winner of "The Great British Baking Show" and learn a few kitchen time-saving tricks? Hussain is a whirlwind of enthusiasm surrounded in sunlight and saturated colors. Her three children and husband are similarly lovable, sweet and supportive. In the premiere each child skips up to taste one of mum's fabulous creations and declares it good. Love is all around.

Did I mention her garden? Yes, Nadiya's landscape is unearthly, a riot of blossoms and greenery. One almost expects a fairy flock to assist her as she creates a summery centerpiece made out of flowers, herbs and berries suspended inside ice cubes.

Enchanted, I turned to my husband . . . only to notice that what was a window into bliss for me didn't contain the same allure for him. "She's too perfect," he answered when I asked what the problem was, which I didn't understand. The entire thesis of Hussain's show is to embrace simplicity over perfection, working creatively with whatever one has on hand.

Then I looked around our quarantine quarters and suddenly I got it. The modest, utilitarian kitchen we designed and proudly installed ourselves suddenly looked cramped and cluttered. Dishes piled up in the sink because they are always piling up these days.

Don't even ask about our little patch of earth, flower beds that despite our regular battles against chaos would be more accurately described as a tiny weed farms . . . and not the smokable kind. An attempt to get into what reads like a more 2020 suitable episode titled, "Easy End of Days" (heh) also came up empty. The opening recipe is an easy pasta dish, something we've eaten quite enough of lately -- featuring beets which, again, would require suiting up like Bane to leave the house.

Besides, "End of Days" actually means "the end of the workday" and doesn't refer to the slow-moving apocalypse in which we're living .

Reality was never genuinely real as the average person knows. Nearly three decades into the reality TV age many of us have a basic awareness of the role editing, soft-scripting and staging plays in these supposedly unfiltered glimpses into the lives of others. This is true whether the reality subgenre in question is competitive, aspirational, instructional or one of the many ostentatious parades of the wealthy and entitled TV has to offer.

Still, there's never been a time in the age of television quite like this one, when we've never been as consciously aware of our own limitations, economic fragility, and the risk of illness or death that may accompany being in close proximity to strangers or even friends and family. In this context, reality TV has a greater potential than scripted comedies and dramas to remind us that life isn't normal and may not be for a very long time.

Thus as TV takes on a more central role in our lives, unscripted shows that once served as sugar rushes may have taken on a distinctly different vibe. A lifestyle expert's cheery suggestion might spark one quarantine-bound viewer's creativity or come across as a rebuke to another. Padma Lakshmi's "Taste the Nation" could inspire you to support a local restaurant by ordering curb-side delivery, or it may be a depressive reminding you how much you miss sitting in a public space and having someone else cook for you.

Encountering these new emotions in connection with unscripted entertainment is, indeed, surprising.

It's not entirely pessimistic and dour, mind you, for the simple fact that reality takes many shapes and forms and a large portion of it is sculpted to allow the audience to binge on the sensation of schadenfreude.

The most casual of viewers of a show like Bravo's "Vanderpump Rules," for example, might notice that its silent line-up of beautiful people blue-steel gazing at the camera looks a heckuva lot like a viral super-spreader event waiting to be reported by local news. Sure, the latest episodes that exist were produced in pre-COVID-19 times, but even then the notion of personal space was foreign to those folks, and admit it – you can probably picture a couple of them would lick a doorknob on a dare.

But even then, as our astute editor Erin Keane pointed out in discussion about the show, there was always a fair chance that L.A.'s sexiest restaurant staff could have taken themselves out by way of a mononucleosis swap at one of their many drunken parties.

This, in turn, leads a person to question how differently ratings staples such as "The Bachelor" and "The Bachelorette" or, heaven help us, "Labor of Love" might proceed and how the necessity of distancing might affect the magic and our feelings about it . . . and whether their already ludicrous messages about love and dating (and fertility) could seem even more depressing in a social environment where physically mingling with strangers is, in accordance with many states' laws, off the table.

Courtship-centered series such as "Dating Around," "Indian Matchmaking," or "Love on the Spectrum" stand a better chance of evolving with the times thanks to virtual meeting platforms such as Zoom, and shows such as "Love Is Blind" and "The Circle," both of which hit their strides either at the start of the pandemic or right before it, may have inadvertently been built to suit this moment.

To see them now makes a person wonder whether part of the confessional soliloquys each person delivers will include, "He says he loves me . . . and he tested negative for the antibodies!" Will that signature question on "The Bachelor" now sound like, "Kayleigh, will you accept this rose . . . and take another COVID test?"

Does our new world reality remove the seductiveness from these proceedings  – or will it somehow reset our relationships with these shows?

Anyway, fans of these series and any of the "Real Housewives" regional flocks may easily overlook the implications of all that unmasked fake hugging and air kissing since the actual people in them are presented as if they are fictional characters.

And honestly, distanced versions of future installments may indeed manifest . . . after the upcoming fifth season debut of "Real Housewives of Potomac." The teaser trailer for "Potomac" includes the offer of a vicarious travel experience by way of a vacation to Portugal – no more of that for a while, since European countries have barred germ-ridden Americans from entry.

No more confrontations at chic restaurants and bars or driveway hair-extension wrestling for the time being. On the flipside, there's the very relatable moment when one of the women tells another, "I by no means want to be near you," a simple statement that now contains multiple layers of meaning!

But these are series with specific and devoted fandoms that won't quit come hell or high infection spikes. A possibly more widespread realization that something is missing or will be missing from our lives may be had upon watching the most recently aired season of "Survivor." CBS pulled the upcoming Fiji season from its fall schedule earlier this week after production was postponed in March due to the World Health Organization's officially declaring COVID-19 a global pandemic. (The safety issues with that show have less to do with the ability to space out contestants than the inability for the crew to do so; it's a demanding production staffed with people who work around the clock, some in cramped spaces. Social distancing and the "Survivor" social experiment are incompatible, in other words.)

This makes upcoming season of "The Amazing Race" (which filmed in 2018, according to Reality Blurred) worth cherishing for a few reasons beyond the standard adrenaline rush of watching teams of two chase one another from station to station and country to country. International travel is a luxury most people never get to experience except through television. Now those all-important flights that meant the difference between staying in the race or being eliminated may register as germ tubes, and yet another reminder of something we still can't do.

Related, but quite different, are the pangs of knowing shows like "Top Chef" simply cannot and won't be the same. The latest Los Angeles season reminded viewers of this constantly by way of excursions to local eateries and events that cannot take place right now. Contestants won plum prizes that either can't be enjoyed for the foreseeable future (like one winner's trip to the canceled Summer Olympics) or can never be enjoyed (goodbye, entry to fancy opening night party for "Trolls World Tour"!).

At least the competitors got a trip to Italy before the infection rates surged there. And the episodes aired while the virus was tearing through that country, adding an unforeseen layer of emotion to the viewing experience.

As pandemic-related infection rates are on the rise in the United States, the reinterpretation of entertainment across genres and mediums is unavoidable. Reality TV never could be immune to this sudden forced shift regardless of how much artificiality props up the genre. Productions are already accommodating to the virus' impact.

One Australian series is rolling with it by way of a "Love Connection" meets "Survivor" series called "Outback Lockdown" in which a recently established couple consisting of a survival expert and British chef head into the Australian outback and decide to shelter-in-place together with only the most rudimentary of accessories. I suspect that'll be closer to fitting my mate's needs than Nadiya Hussain's kitchen fantasies . . . although frankly, I'd much rather stay at home with her reminding me of how beautiful and happy the world can be within your own four walls, sink full of dishes notwithstanding.