Trump's coup came so close to working — do the American people even care? 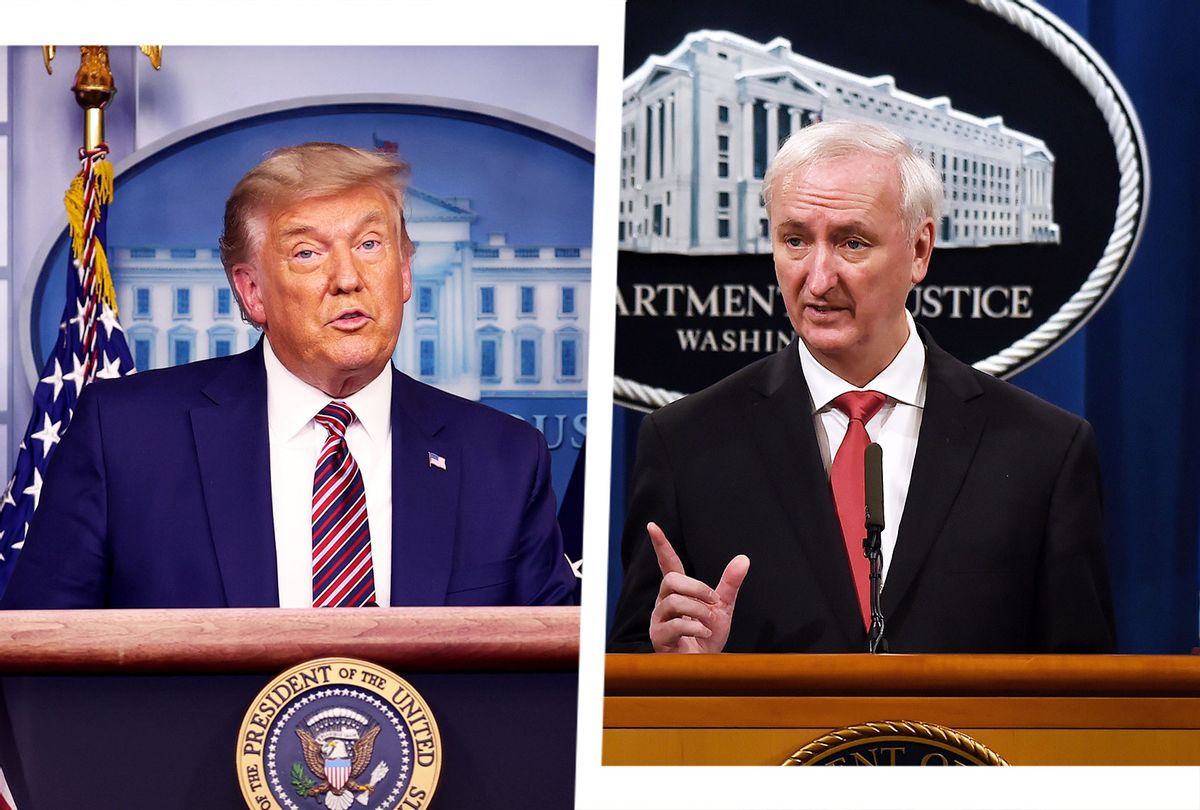 More "revelations" about the Trump regime's crimes against democracy and the American people continue.

Last Friday, it was reported that last December Donald Trump tried to order the Justice Department to declare the 2020 presidential election "illegal" and "corrupt," paving the way for nullifying or overturning it completely.

CNN reports that Trump pressured then-acting Attorney General Jeffrey Rosen to make a false declaration "in an attempt to help Republican members of Congress try to overturn the election result, according to notes of a December 2020 call Trump held with Rosen and acting deputy attorney general Richard Donoghue":

"Just say that the election was corrupt + leave the rest to me and the R. Congressmen," Trump said on the call, according to Donoghue's notes.

Donoghue's contemporaneous notes were provided to the House Oversight Committee ... [and] are the latest evidence of Trump's efforts to pressure the Justice Department to support his false claims of election fraud as he tried to overturn his November loss to Joe Biden.

On Twitter, Robert Reich recently wrote, "We have become so inured to Donald Trump's fascism that we barely blink an eye when we learn that he tried to manipulate the 2020 election. This should frighten every American to their core."

Trump's attempt to force Department of Justice officials to be co-conspirators in his attack on democracy and the rule of law is part of a much larger picture. What do we now know?

Trump's coup attempt cannot be described as "amateurish" or hypothetical: it was a concerted effort by the former president and his operatives to keep him in power indefinitely over and against the will of the American people. Contrary to the narrative that has been offered by many in the mainstream news media, he came close to succeeding.

In addition, Trump's attack force also came much closer to achieving their goal of stopping Joe Biden from becoming president by killing members of Congress on Jan. 6 than was previously known. U.S. military commanders were sufficiently concerned that Trump would invoke the Insurrection Act and order martial law as part of his coup attempt that they considered mass resignations and other means in response to his "deranged" and "Hitler-like" behavior in the weeks following the 2020 election.

Trump's coup attempt in response to his electoral defeat was just one of several moments — also including last summer's protests in response to the police murder of George Floyd — when he considered invoking the Insurrection Act and declaring martial law, which might have permitted him to remain in power indefinitely.

There has also been new reporting about the Trump regime's connections to Russia, and the Russian campaign to manipulate and undermine American democracy, using Trump as a type of "useful idiot" and chaos agent.

Trump and the Republican Party's coup attempt is ongoing. On the state level, Republicans continue to enact new laws aimed at preventing Black and brown people from voting and making it more difficult for Democrats to win elections. Trump's allies and servants have reportedly created some form of shadow Cabinet, in an apparent effort to further delegitimize Biden's presidency and encourage more right-wing violence and societal discord.

Unfortunately, the American people and the mainstream news media are becoming increasingly disengaged from these "revelations" about Trump and his regime's crimes and overall wrongdoing and evil. Media coverage follows a basic rule: if it bleeds, it leads — until it doesn't. Reporting on Trump's crimes and putting them in full context as part of a larger attempt to protect democracy is not a high priority in the 24/7 news cycle. Instead, too many of the leading media outlets thrive on false equivalencies between Republicans and Democrats through the obsolete habit of "both sides" journalism. Even faced with one party (and its associated political movement) that poses an existential threat to American democracy, the mainstream media is still, for the most part, afraid to state that plain truth for fear of being labeled as "liberal" and "biased."

As for the larger public, it generally takes its cues from their political and other opinion leaders. And to this point, Biden and the Democrats are not treating the Trump regime's crimes as an emergency.

The millions of Americans trapped in the MAGAverse and TrumpWorld are most likely lost to reality. They have internalized Trump and the neofascist movement's false claims about the "Big Lie" and that Donald Trump is somehow still the "real" president. As members of a political cult, they are either indifferent to Trump's crimes or see them as admirable. In this perception of the world, the rule of law does not apply to Trump because he is fighting for "people like them" and their vision of America.

Perhaps most important, since the specter of Trump has not been magically vanquished by Biden and the Democrats, many Americans, now exhausted and traumatized, have begun to surrender to malignant reality. The overnight salvation many Americans hoped would arrive with Trump's defeat at the ballot box has not arrived

This indifference to Donald Trump's crimes and the growing power of neofascism can also be explained by willful denial. When a society is in crisis, people find ways to convince themselves that somehow everything will be fine, because to face the dire reality of the situation is too painful.

Talia Lavin, author of "Culture Warlords: My Journey into the Dark Web of White Supremacy," explores the power of denial among Democratic leaders in a recent essay at MSNBC:

Millions stand in readiness, whipped further into anger each day, ready to breach as many walls as possible to make good their vision of a paradise on earth in which their opponents are given swift and thorough retribution: an earthly crusade, laid out in the language of salvation and damnation, preached from the pulpit and in the public square.

On the federal level, there is a yawning chasm between how the Republican and Democratic Parties are responding to this din outside the gates — and in turn how they view the past, present and future of American politics. Many liberals are prone to state that in contrast to the right-wing worldview, Democratic officials are near-universally tethered to facts, fundamental and evident truths, and less willing to descend into the deeps of paranoiac fantasy. In a broad sense, this is the case.

But there is a widespread delusion among the ranks of Democratic senators and representatives. Their shared belief in bipartisanship, as not only a moral good in its own right but something necessary and, above all, feasible, is one that bears as tenuous a relation to reality as any pizzagater's convictions.

Denial is not an effective tactic in the life-or-death struggle against Trumpism and neofascism. Instead, it will lead to the death of democracy.

In a recent interview with the Los Angeles Times, political scientist Tom Mann sounded a dire warning about America's democracy crisis, telling reporter Mark Barabak, "We're on a precipice. We're actually potentially so close to losing our democracy." America has long had right-wing extremist groups (as well as some on the left), Mann continued, "but they've always been marginalized or co-opted to become more moderate. This is the first time an extreme set of forces like this has actually won the White House and tried to steal it a second time."

Mann concludes that if Donald Trump had managed to "win" the 2020 election, "We'd have passed Hungary pretty quickly in moving to an autocratic world and a dangerous world. So it could be worse."

A medical analogy may be helpful in understanding America's current democracy crisis. At present, Trumpism and neofascism are a chronic disease that is becoming more acute. The patient is in extreme pain but continues to deny the seriousness of the ailment, and moreover is losing the capacity for normal function. At some point in the near future, the patient is likely to collapse, and will require long-term institutional care if they are to have any hope of surviving, let alone returning to any normal quality of life.

In this analogy, the patient can still choose to get better at this point — but only by accepting the seriousness of the disease and accepting medical treatment. If they choose to ignore the dire prognosis, then the end is in sight.

In his recent book "Our Malady: Lessons in Liberty From a Hospital Diary" — partly a memoir of his own serious illness — historian Timothy Snyder uses medical and therapeutic language to great effect. He writes:

America is supposed to be about freedom, but illness and fear render us less free. To be free is to become ourselves, to move through the world following our values and desires. Each of us has a right to pursue happiness and to leave a trace. Freedom is impossible when we are too ill to conceive of happiness and too weak to pursue it. It is unattainable when we lack the knowledge we need to make meaningful choices, especially about health.

The word freedom is hypocritical when spoken by the people who create the conditions that leave us sick and powerless. If our federal government and commercial medicine make us unhealthy, they are making us unfree.

Do the American people want to heal their democracy and body politic, or are they resigned to seeing it succumb to a deadly disease — of which Trumpism and neofascism are only the latest and most urgent symptom?

The fate of the country and its democracy is in the hands of the American people. Will they bestir themselves to action, or simply shrug their shoulders and accept what is already happening? The world will soon find out.