The silkiest pasta sauce from any vegetable you've got 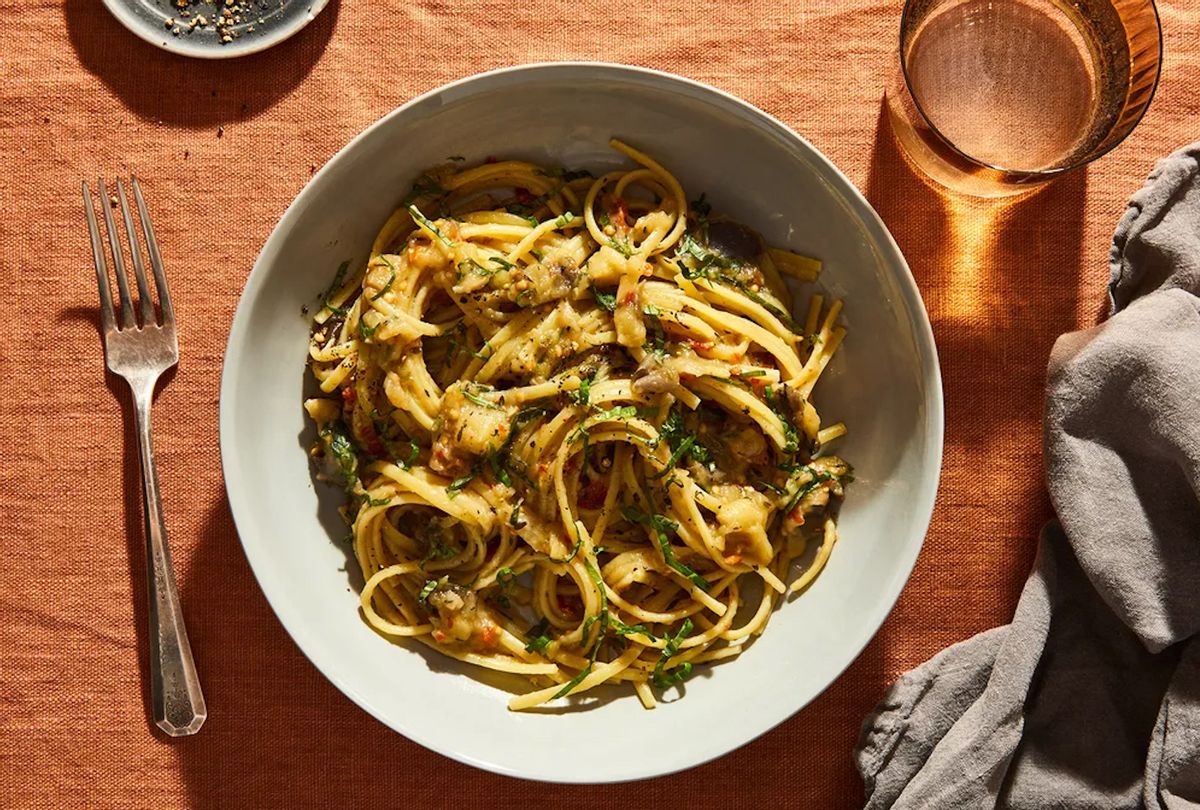 This recipe started as the white flag in a feud with eggplant—its sponge-ish behavior, its peculiar demands for salt-leaching and vigilant frying — but it turns out to be a technique that can help you melt just about any vegetable into a rich, pasta-hugging sauce.

Francis Lam, the host of The Splendid Table and the vice president and editor in chief of Clarkson Potter, first wrote about the technique in 2009 for Gourmet's website, and later for Salon's, and — later still — I included it in the first "Genius Recipes" cookbook.

But for the first time, for this week's video and podcast, I got to hear more from Francis about the genesis of the recipe and all the other liberating dinners we could be eking from it, in summer and beyond.

No thanks to culinary school, Francis had thought there was only one right way to cook eggplant, and every summer, in the name of ratatouille, he'd go to battle with the fruit that is apparently also a vegetable (1). He'd salt, he'd cube, he'd oven-sear uncrowded batch after uncrowded batch, willing them not to smear into a pulp.

But after tasting a proudly ugly eggplant pasta at a restaurant in Rome ("a truly homely specimen" (2)), he wrote, "Why fight the eggplant and try to get neat, seared cubes? Let it be what it wants to be! Let it turn to mush! Let it soak up oil! Let us all be frank with ourselves."

In addition to this permission to relax, the keys to Francis' technique are, for starters, flavorful friends like garlic and thyme, and plenty of olive oil to carry them. Then, after a lazy, mostly covered simmer with a little liquid to help vegetable become sauce, all that's needed is a little prodding with a wooden spoon to finish the job.

And while eggplant is especially agreeable to drinking up garlicky, herby oil (and subsequently collapsing), you shouldn't stop there. As The Wednesday Chef blogger Luisa Weiss wisely pointed out back in 2010, Francis' basic method can be applied to just about any vegetable you're not sure what to do with — some will just take more time or liquid to nudge them along.

Here are a few ideas to get you started: Luisa suggested zucchini with mint or parsley, or cauliflower with red pepper flakes (and Parm for both). On the podcast, Francis came up with everything from chile oil to capers to MSG for the eggplant. I'm ready to break out Marc Matsumoto's grated dried shiitakes again, with a yellow pepper that's been side-eyeing me all week.

(1) It's a vegetable because we said so, writes our Kitchen Scientist columnist Nik Sharma.

(2) Beauty may be in the eye of the hungry. As my husband walked by the copy of the Genius Recipes book splayed open to this page, he said, "That looks so good."