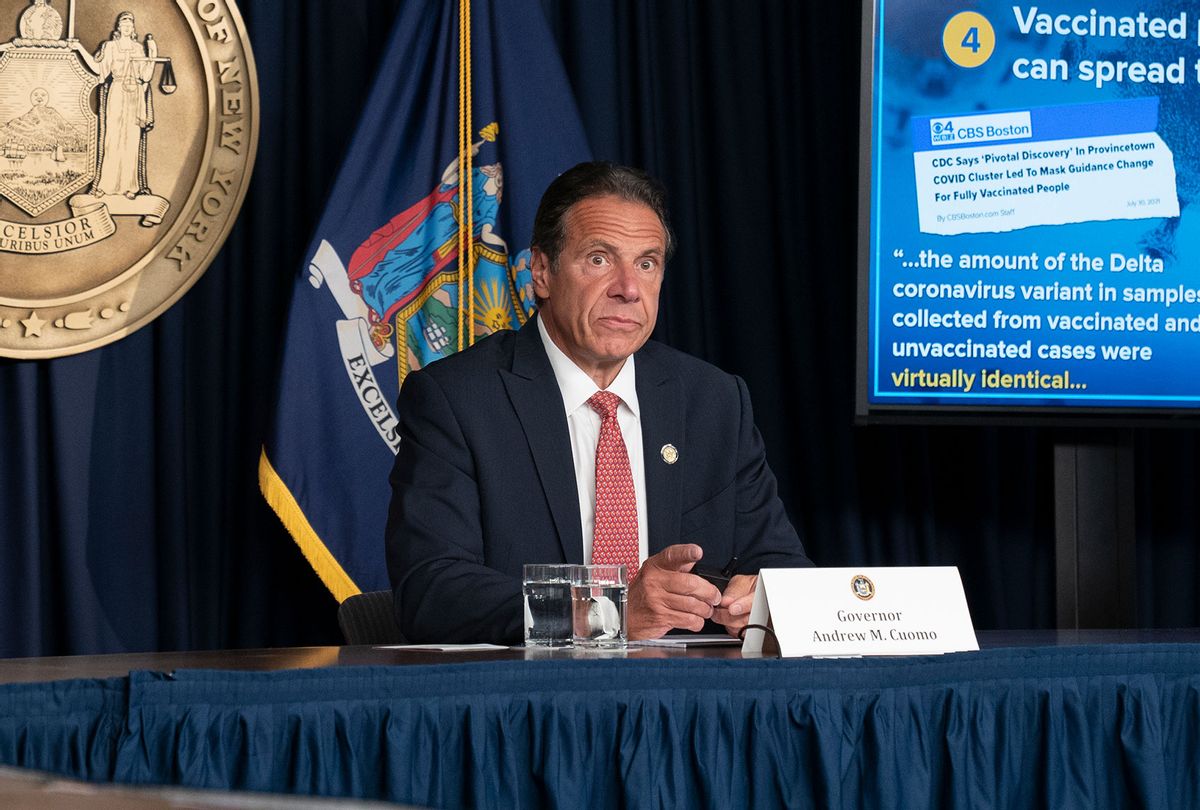 New York Gov. Andrew Cuomo, a Democrat, complained on Tuesday that he was unfairly maligned by accusers and investigators even as he announced that he would resign amid an impeachment investigation into sexual harassment allegations and his handling of the COVID pandemic.

"Given the circumstances, the best way I can help now is if I step aside and let government get back to government," Cuomo said at a news conference, announcing that he would step down in 14 days. "And therefore that is what I'll do, because I work for you, and doing the right thing, is doing the right thing for you."

The announcement marked a stark reversal by the three-term governor, who vowed to stay in office and fight the charges against him after New York Attorney General Letitia James, a Democrat, released a 165-page report detailing sexual harassment and misconduct allegations from 11 women and accusing Cuomo of violating state and federal laws. President Joe Biden and just about every elected official in New York called on the governor to step down after the report.

"Today closes a sad chapter for all of New York," James said in a statement, "but it's an important step towards justice."

Cuomo, the son of former Gov. Mario Cuomo who was elected after former Gov. Eliot Spitzer resigned due to his own sex scandal, will be replaced by Lt. Gov. Kathy Hochul, the first woman to lead the state. Though she ran on Cuomo's ticket in 2014, Hochul has largely been shut out by the governor's inner circle throughout her tenure and the pandemic.

"I agree with Governor Cuomo's decision to step down. It is the right thing to do and in the best interest of New Yorkers," Hochul said in a statement. "As someone who has served at all levels of government and is next in the line of succession, I am prepared to lead as New York State's 57th Governor."

The resignation could be an attempt to stave off impeachment by the state Assembly, which vowed to move forward quickly after James' report. But it's unclear if the assembly will now drop its impeachment plans, which would allow Cuomo to run for office again if he chooses. A growing number of Democrats had called for Cuomo to be convicted and barred from running again. Assemblymember Yuh-Line Niou, a sexual assault survivor, said the chamber should still move forward with impeachment.

Some political observers believe that Cuomo is trying to keep his hopes for a fourth term alive by stepping aside before a possible impeachment.

"I expect in my lifetime, Andrew Cuomo to run for office again," said MSNBC host Chuck Todd. "What that office is? I don't know, but that's what this resignation tells me today. He wants to live to fight another day."

Despite Cuomo's announcement, much of Tuesday's news conference focused on batting back the allegations. The conference began with a presentation from Cuomo's lawyer Rita Glavin, who argued that James' report "contains errors" and "omitted key evidence."

"The report said I sexually harassed 11 women," Cuomo said. "That was the headline people heard and saw. The reaction was outrage. It should have been. However, it was also false."

Cuomo at the news conference apologized to a state trooper who accused him of unwanted touching and to the women he "truly offended" but argued that he did not think he did anything wrong.

"In my mind, I've never crossed the line with anyone," he said, "but I didn't realize the extent to which the line has been redrawn."

Cuomo said the situation was a "highly political matter" with "many agendas," arguing that the allegations were "politically motivated."

"Your dad made mistakes," he said, "and he apologized and he learned from it and that is what life is all about."

Niou called Cuomo's comments "horrific" and accused him of trying to gaslight  the "women he hurt."

Karen Hinton, one of the women who accused Cuomo to harassing her, said she was not "celebrating" the resignation. "But I do celebrate power of women who came forward," she said.

Mariann Wang, an attorney for Cuomo accusers Alyssa McGrath and Virginia Limmiatis, said her clients felt "vindicated" and "relieved" that the governor will "no longer be in a position of power over anyone" after accusing him of trying to "gaslight and attack the brave women who came forward."

Senate Majority Leader Chuck Schumer, D-N.Y., called the resignation "the right decision for the good people of New York." Sen. Kirsten Gillibrand, D-N.Y., told reporters that "my view from the beginning was that after these numerous credible allegations came out that because the governor had lost the support of his governing partners that it was time for him to resign."

"Make no mistake, this is the result of survivors bravely telling their stories. It was past time for Andrew Cuomo to resign and it's for the good of all New York," agreed New York City Mayor Bill de Blasio.

Cuomo's announcement came shortly after his top aide, Melissa DeRosa, resigned after she was named dozens of times in the AG report. Attorney Roberta Kaplan resigned on Monday as the chairwoman of Time's Up after the report said she advised DeRosa on a letter aimed at smearing his earliest accuser. The Human Rights Campaign has hired a law firm to investigate President Alphonso David's involvement in helping Cuomo respond to the allegations after he was named in the report as well.

Cuomo still faces federal scrutiny over his handling of nursing home death data, a state investigation into whether he used state resources to write his book about his pandemic response, and about a half-dozen district attorneys are considering sexual harassment charges for alleged incidents that happened in their jurisdictions.

On Monday, Cuomo's executive assistant Brittany Commisso described an incident in which the governor groped her breast and another at his governor's mansion in Albany when he rubbed her butt.