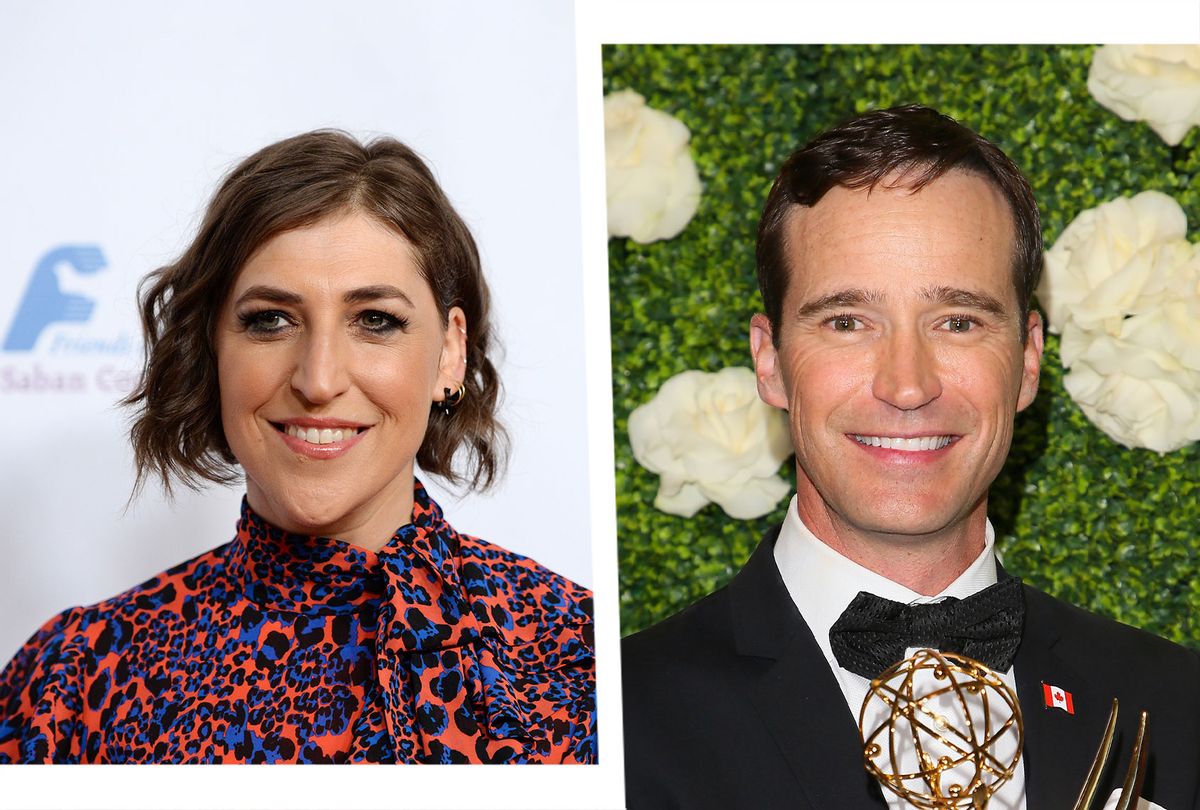 After almost a full year of searching and auditioning guest hosts, "Jeopardy!" has selected its new hosts in Mike Richards, the show's executive producer and frontrunner in the search, and Mayim Bialik, who was a guest host on the show and is best known for her work in "The Big Bang Theory," reports Deadline. Richards and Bialik will split hosting duties, with Richards to host the long-running daily syndicated program and Bialik to host primetime and spin-off specials of the famed quiz show.

"IT'S TRUE!!! Been waiting a long time to tell you all," Bialik tweeted of the news early Tuesday. The "Big Bang" fan-favorite notably didn't just play a genius on the show — she also holds a PhD in neuroscience in real life. "Really really honored and astounded and excited for this – it's beyond anything I ever imagined could happen."

"I am deeply honored to have the opportunity to host the syndicated version of 'Jeopardy!,'" Richards said in a statement. "Never in my wildest dreams could I have imagined being chosen to step into a role of this magnitude. Alex believed the game itself and the contestants are the most important aspects of the show. I was fortunate to witness his professionalism, intensity and kindness up close and that will serve as the ultimate blueprint as we continue to produce the show we love."

Ravi Ahuja, Chairman of Global Television Studios and Corporate Development for Sony Pictures, also issued a statement on the announcement. "We took this decision incredibly seriously. A tremendous amount of work and deliberation has gone into it, perhaps more than has ever gone into the selection of hosts for a show – deservedly so because it's 'Jeopardy!' and we are following the incomparable Alex Trebek," Ahuja said. "A senior group of Sony Pictures Television executives pored over footage from every episode, reviewed research from multiple panels and focus groups, and got valuable input from our key partners and 'Jeopardy!' viewers."

The announcement comes on the heels of a storm of controversy surrounding Richards. Shortly after news broke that he was the frontrunner to succeed the late, beloved Trebek, lawsuits and allegations of mistreatment against Richards from his previous workplace at "The Price is Right" from the 2010s began to resurface.

In an internal message to "Jeopardy!" staff sent Monday morning, Richards confirmed that he'd been offered the host role, though he said "no final decisions have been made" at that time. He also defended himself against recent unearthing of a past lawsuit against him, including from a woman named Brandi Cochran who says Richard retaliated against her when she told him she was pregnant with twins.

Per Cochran's suit, filed in 2010, "Cochran revealed that she was carrying twins," and Richards "put his face in his hands. He asked her twice, in an annoyed tone, 'Twins? Are you serious? . . . You're serious?' After that, Cochran was booked to work less often and was repeatedly taken out of acts she would have appeared in before." The lawsuit was settled in 2016.

Another former "Price is Right" worker, model Lanisha Cole, also filed a suit in 2011, in which she alleged she was "wrongfully terminated, constantly humiliated and berated in front of her peers by Richards and an additional producer."

Pregnancy discrimination and workplace abuse of women have long been rampant in the entertainment industry, and only recently begun to be addressed by the rise of #MeToo a few years ago. Still, in Richards' Monday email, he told "Jeopardy!" staff he denied these claims:

I want you all to know that the way in which my comments and actions have been characterized in these complaints does not reflect the reality of who I am or how we worked together on 'The Price is Right.' I know firsthand how special it is to be a parent. It is the most important thing in the world to me. I would not say anything to disrespect anyone's pregnancy and have always supported my colleagues on their parenting journeys.

Over the past few weeks, as if news about Richards as the likely next host of "Jeopardy!" hadn't already been met with a lukewarm reception, the resurfacing of the allegation from Richards' past have been particularly disappointing. After all, Trebek himself had suggested back in 2018 that he'd like to be replaced by Laura Coates, a Black woman.

While fans have campaigned for LeVar Burton's permanent installment at the "Jeopardy!" podium, even circulating a well-publicized petition, Richards had inspired the opposite reaction. In a Change.org petition started a week ago that has amassed over 1,000 signatures, the message is clear: "'Jeopardy!' fans everywhere, our future is on the line. This is not a job, it's a tenure, and Mike Richards is reportedly the front runner to be the new permanent host of 'Jeopardy!' This is the entertainment equivalent of insider trading. In short, it's a crime."

Through the months-long guest-hosting runs on "Jeopardy!" since Trebek's death last November, while mourning Trebek's absence, many fans were excited about the opportunity to embrace more diversity on the show and someone who embodies its spirit of intellectualism and curiosity. Some of its most notable guest hosts have included Burton, Robin Roberts, even CNN's Anderson Cooper. Fox Sports host Joe Buck will host this week.

Through it all, Burton, who has been open about his interest in being named Trebek's successor, has been a decisive fan-favorite, and it's not difficult to see why. Last week, shortly after news that Richards would likely be the next host, Burton tweeted his gratitude to fans and the show: "I have said many times over these past weeks that no matter the outcome, I've won," he wrote. "The outpouring of love and support from family, friends, and fans alike has been incredible! If love is the ultimate blessing and I believe that it is, I am truly blessed beyond measure."

Richards and Bialik will assume their full-time hosting duties on the show's forthcoming 38th season, as "Jeopardy!" closes out its 37th season this week.