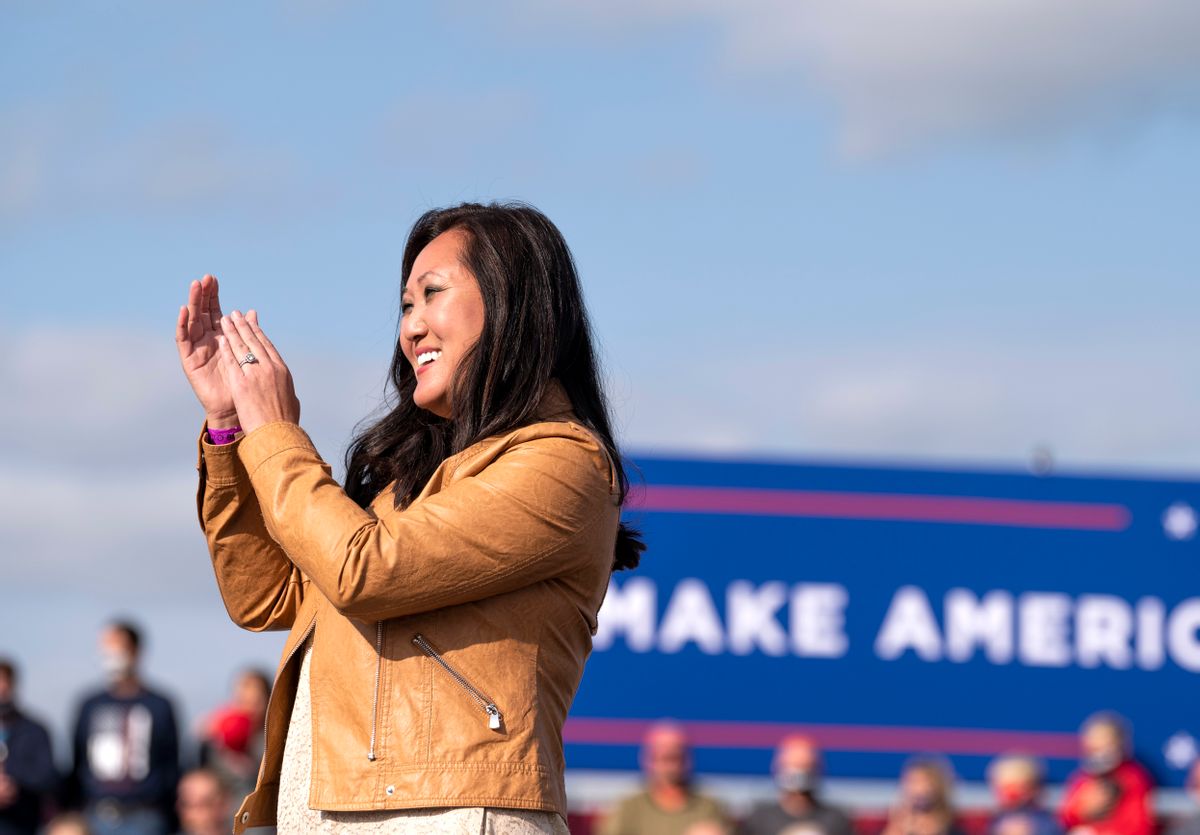 Minnesota Republican Party chair Jennifer Carnahan looks on during the national anthem during a rally for President Donald Trump at the Bemidji Regional Airport on September 18, 2020 in Bemidji, Minnesota. (Getty Images)
--

The Republican Party of Minnesota was rocked this week by a scandal involving a top donor and conservative activist who was indicted for operating a child sex trafficking scheme, a sordid affair which also implicated an up-and-coming College Republican leader from the state.

According to federal charges unsealed Thursday, 30-year-old Anton 'Tony' Lazzaro is accused of conspiring with others to recruit six underage victims to engage in "commercial sex acts." He was taken into custody in Minnesota just a few hours after the indictment was made public, the U.S. Attorney's office said.

Lazzaro is also reportedly a close friend of state Republican Party Chair Jennifer Carnahan, spurring calls for her resignation from a number of state lawmakers.

Minnesota has proven itself as an important battleground over the last few election cycles — with former President Donald Trump outperforming expectations in the state despite a close loss in 2020. The scandal threatens to upend key fundraising efforts and behind-the-scenes strategizing as Republican try improve upon that performance in next year's midterms, an especially important cycle given Minnesota's status as one of the few states with a currently divided legislature.

The Minnesota College Republicans organization said Saturday that Gisela Castro Medina, the newly installed 19-year-old chair of the University of St. Thomas chapter, had been arrested in Florida Thursday alongside Lazzaro for "obstruction of justice, sex trafficking, and conspiracy to commit sex trafficking of underage victims."

The conservative youth organization was quick to distance itself from both the longtime state GOP operative and Medina, who they claim had not assumed the "official duties" of her new role.

"We as an organization are absolutely disgusted by the actions of Ms. Medina, and have cut all ties with her effective immediately," the organization wrote in a statement.

"Our prayers go out to the victims of Anton Lazzaro and Gisela Medina — we believe you. We stand with you. May justice be served."

By Sunday more than a half-dozen Republican state legislators had called on Carnahan to resign. Four of those — state Reps. Steve Drazkowski, Tim Miller, Cal Bahr and Jeremy Munson — penned a two-page letter Saturday which outlined their disgust with recent headlines and hinted at other rumors of impropriety that have swirled around Carnahan in recent years. They also called for an audit into the organization's financial activities.

Lazzaro and the state Republican Party chair were reportedly close — they hosted a podcast together called "#TruthMatters" from October 2019-January 2020 and have known each other for many years. Lazzaro is also one of the top donors to Carnahan's husband, Republican U.S. Rep. Jim Hagedorn, and helped campaign behind the scenes for Carnahan's ascension to her current position, according to Minnesota Public Radio.

"The news of a close, personal friend and advisor to our state party chair being indicted and arrested for heinous crimes against children doesn't just look bad. It is bad. It affects members, volunteers and donors' ability to trust the integrity of our organization," the lawmakers wrote Saturday. "Chair Carnahan needs to resign."

Just a day before, state Sen. Roger Chamberlain — another Republican who serves as assistant majority leader — also called on Carnahan to resign. "I find it impossible to believe she didn't know about his activities," he wrote in a statement.

"Questions surrounding her actions make it impossible for her to effectively serve as chair any longer," Coleman wrote on Twitter.

Carnahan ultimately fought back with a lengthy screed of her own — attacking her critics while calling the incident a "coup" and an attempt to "defame" her with "false accusations."

"The party and its leaders cannot be held responsible for donors and unofficial persons," she wrote on Facebook. "We cannot be expected to know more than law enforcement."

She did denounce Lazzaro's alleged actions in her statement, writing, "If the allegations against Mr. Anton Lazzaro are true, this is an abhorrent act that we condemn in the highest possible terms."

She also pledged to turn over any donations he made to charity.