How to make the best Italian-American spaghetti and meatballs dinner

For more flavorful meatballs, turn to a hot pan instead of your oven 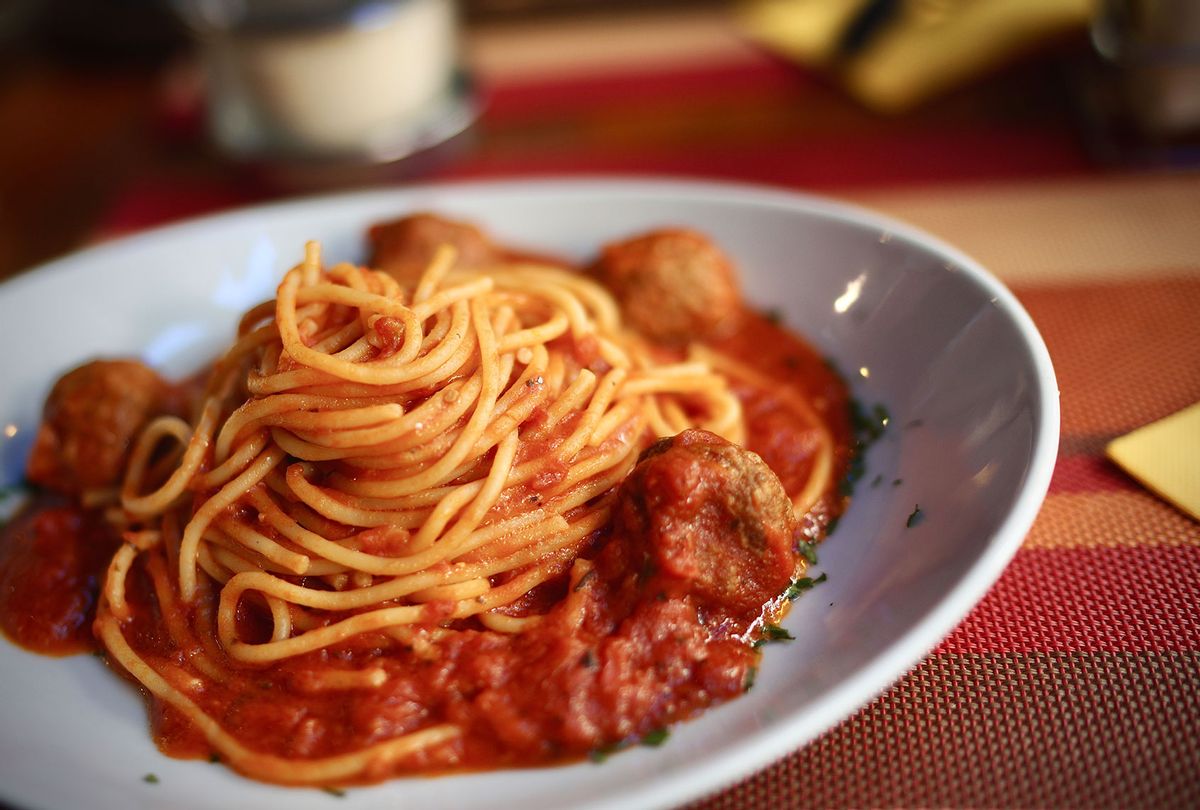 My maternal grandmother, Nana, was a sauce aficionado. She could eat tomato sauce by the gallon. Though not Italian by any means, she would heap spoonful after spoonful over her pasta at Sunday afternoon dinners.

Her plate always more so resembled soup with some pasta interspersed throughout — the focus was on the sauce and the more, the better. She passed this proclivity to my mother, who passed it to me. The rich, thick sauce she made was purely tomato. There was a bit of seasoning, garlic and oil to gild the lily, but it was foremost tomato-forward. The flavor was pure and the taste unlocks a world of memories and nostalgia.

These Sunday afternoon meals (and the subsequent leftovers) were an ongoing component of my childhood, along with Whitney Houston and "The Wizard of Oz," and I think my Nana and my mom for instilling in me such a deep laugh of red sauce. Note: we truly only ever called it sauce or red sauce, not marinara and definitely not "gravy."

At its core, there may be no dish more directly synonymous with the Italian-American ethos as the iconic, indelible spaghetti and meatballs. It comforts, it satiates and its redolent with flavor, humor and images of cartoon couples amorously sharing a single strand of tomato-laced noodle. That said, it's not frou-frou. It's just a sensible, delicious full meal in a bowl.

It's also a perfect symbol of the Italian-American sensibility; there is no such thing as spaghetti and meatballs in Italy, but it encapsulates the entire notion of the culture. While other pasta shapes have taken precedence in recent years (remember the Great Bucatini Shortage of 2021?), spaghetti is forever an iconic classic. But how did it become one?

Today's modern Italian-American meatballs look nothing like the originals. According to Escoffier Online, the first meatballs may have been made in ancient Persia and were called kofta. If you've ever had Italian Wedding Soup, the original meatball (or "polpettone") was similar in size. It was about the size of an olive and had barely any ingredients beyond meat. Serious Eats also references a miniscule, "marble-sized" meatball called pallottine that was often eaten in Abruzzo along with tomato sauce and spaghetti alla chitarra.

The Peterborough Examiner cites China as the origin-point of the dish, noting that Chinese meatballs appeared as early as 200 BC (although not usually with beef). China is also said to have mastered nodules — or an early variation of spaghetti — as well. Due to this, the publication deems spaghetti and meatballs "the first fusion food."

As time went on, more and more additions were included in meatball recipes. The original polpettone was actually very rustic and served simply, almost never alongside pasta. Smithsonian Magazine notes that the first polpettone recipe found in print was in a cookbook published in 1891 by Pellegrino Artusi, called "La Scienza In Cucina E l'Arte di Mangiar Bene: manuale pratico per le famiglie."

Once Italian-Americans emigrated, though, meatballs grew and were paired with pasta — the growing staple of the Italian-American community — as well as tomatoes, which had recently come into popularity after being shunned for so long (many believed they were actually poisonous!). To put the sheer scale of the immigration into perspective, Smithsonian cites a statistic that notes that 4 million Italains immigrated to America between 1880 and 1920.

The Atantic notes that a 1936 cookbook said that meatballs may have actually been adapted from the Greeks. For Italian immigrants newly living in the US, the shockingly cheap meat and super-convenient canned tomatoes were mixed with the cheap pasta from their home country and voila, Italian-American spaghetti and meatballs were born. This helped turn the "peasant food" of polpettone into a substantial, hearty meal that could feed the whole family. Many outlets note the meatball size may have even been an indicator of a family's wealth — the more money the family had, the larger the meatball.

Soon after, red-and-white checkered restaurant tablecloths splattered with sauce dotted the American landscape. What was once a meal to be enjoyed only at home — and usually without sauce or pasta — became a go-to meal at restaurants and a Sunday (and sometimes Wednesday) staple in the homes of Italian-American cooks. In 1955, the burgeoning popularity of the cuisine took a turn for the mainstream as it appeared onscreen in the now-iconic scene in "Lady and the Tramp." The rest is history.

As time has gone on, though, some argue that we've reached a point in which the "Italian" component of the Italian-American cuisine can even be dropped from the categorization, lionizing spaghetti and meatballs as the epitome of true "American cuisine." As The Washington Post states in this piece, spaghetti and meatballs is now the epitome of American food, a dish that has nourished and satiated for over a century, a confluence of Italian ingenuity and (newly) American customization.

Whatever the genre, spaghetti and meatballs is, and always will be, iconic. And I will make red sauce with reckless abandon for all of my days, thanking my Nana every step of the way.

Some fun facts about my meatball preferences: I've never been a proponent of using stale bread soaked in milk in my meatballs, which is sometimes called a panade; I don't find anything appetizing about that. To that end, I've actually never been a fan of especially tender meatballs. I find a "mushad," soft meatball rather unappealing. I know that's probably bizarre for many to hear, but I'm more committed to the deeply crisped, incredibly browned exterior — and a properly seasoned inside. Lastly, I don't bake my meatballs and I definitely don't throw raw meatballs into a cauldron of bubbling sauce, instead preferring to saute them.

For the sauce, use the Classic Marinara recipe from this piece to take your spaghetti & meatballs up another notch entirely.

1. In a large saucepan, heat olive oil over medium-low heat. Add onions and cook until translucent. Add garlic and toast for 30 seconds, or until fragrant. Remove from heat and let cool.

2. In a large bowl, combine ground meat or plant-based meat of choice, cooled garlic-onion mixture, egg, parsley, breadcrumbs, ricotta, parm, mozzarella, salt and pepper. Blend well, but not too much, and make a tiny polpettone "test patty" to ensure the seasoning is to your liking: heat a touch of neutral oil in a small pan and cook until deeply browned and crisp. Remove from pan, drain on paper towel, and season with flaky kosher salt. If well-seasoned, portion meatball mixture into golf ball-sized balls. If needing anything, re-season, re-mix, and then portion.

3. In a large, heavy skillet, add a few tablespoons neutral oil and heat over medium or medium-high heat. Add portioned meatballs and cook — not moving or turning — until the bottom is incredibly browned and crisp. Flip and cook until the opposite side is crisped in the same vein, and continue to flip and turn meatballs until they're super browned on all sides. Be careful not to crowd pan or else the meatballs may steam instead of browning. Also, depending on which meat you used, be mindful of the excess oil. If the meatballs are drowning in oil and grease, drain repeatedly throughout the process. It's a delicate dance. You don't want the pan to be dry, but you're also not deep-frying.

4. Remove to a draining rack over a sheet tray or a paper towel-covered plate, season with flaky kosher salt, and let drain.

5. Meanwhile, boil water in a large pot and cook spaghetti according to package instructions until al dente.

6. In a large pan, toss hot pasta, hot sauce, and meatballs together, adding grated Parmesan and a touch of high-quality olive oil, tossing until spaghetti is evenly coated and all flavors are married. Serve with additional greeted Parm and side salad (recipe following).

To help break through the heaviness of the iconic classic, I've also included a salad recipe that is bright, pungent and downright delicious. The plums are an amazing inclusion!

2. In a large bowl, toss plums, arugula, pistachios, fennel, and ricotta salata together. Drizzle half of dressing oer top, toss, and taste. You don't want this salad to be drenched in dressing, but feel free to add more, if necessary.