Captaingate: Did Andrew Cuomo ditch his dog while moving out of the governor’s mansion? 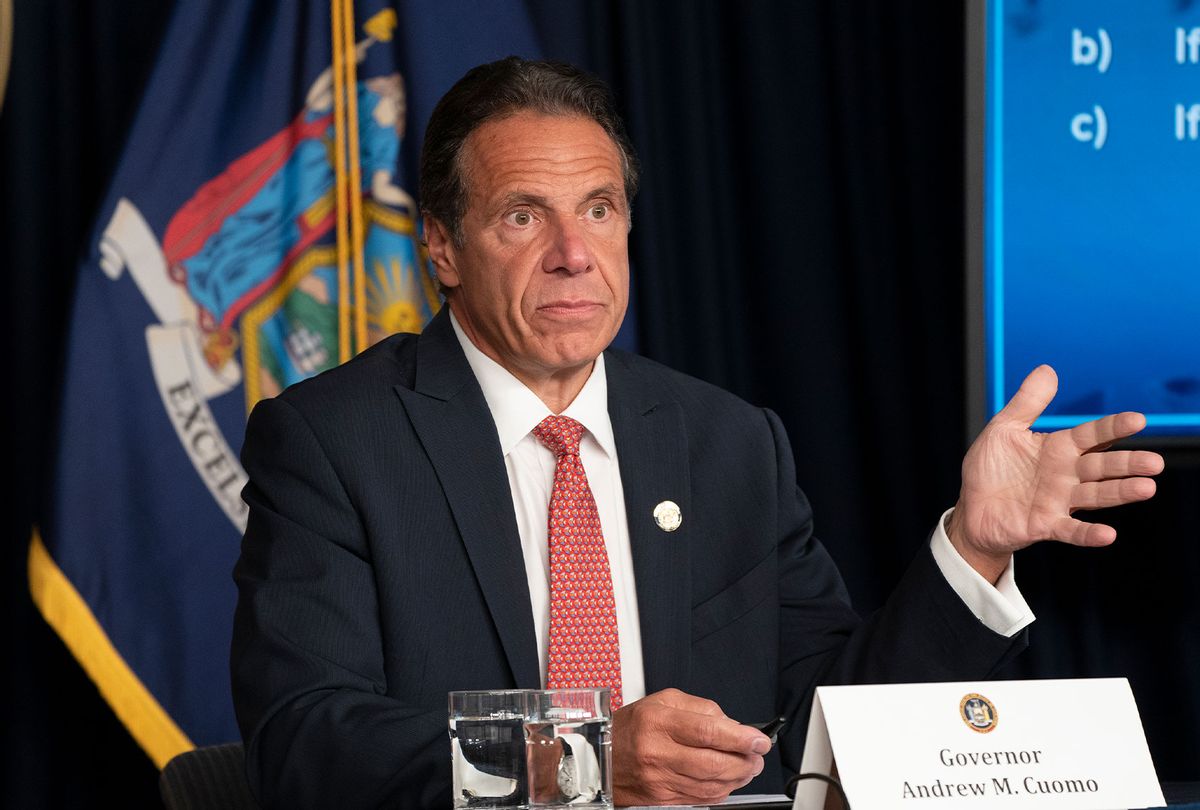 Cuomo, a Democrat, will officially step down on Monday after New York Attorney General Letitia James, also a Democrat, released a report detailing sexual harassment and misconduct allegations from 11 women. He has been staying at one of his sisters' homes in Westchester and reportedly asked staff members at the mansion if "anyone would like to keep his dog," according to the Albany Times-Union.

One employee at the mansion recently took Captain home for a few days but the pup, who has nipped several people since Cuomo adopted him in 2018, proved to be "too much," state police sources told the outlet. The New York Post labeled Captain, a three-year-old Siberian-shepherd-Malamute mix, Cuomo's "only friend left in Albany" after he was pictured at the governor's side as he tried to weather the storm of his mounting scandals. The governor has regularly shown the dog off since adopting him, even featuring the pup in his Instagram profile photo.

Rich Azzopardi, a spokesman for Cuomo, told the Times-Union that leaving the dog behind was only "temporary" because Cuomo is planning to go on vacation.

"He wants to go on vacation. They love that dog," he told the outlet. "That's not what he asked: He didn't ask to give away the dog. ... This nameless source is crazy. ... I can't believe this is what I'm dealing with right now, when I'm dealing with a major storm."

The spokesman then issued another statement on Saturday focusing on Tropical Storm Henri, which hit the Northeast over the weekend, rather than Cuomo's planned vacation.

"Captain is part of the governor's family and for your nameless ill-informed source to imply they've been trying to give him away is untrue," the statement said. "Someone offered to watch him for a few days while the transition was ongoing but for that to be weaponized and morph from a game of telephone into the pages of your paper is absurd — now excuse us we're preparing for a major storm."

A State Police source told the outlet that Cuomo "tried giving the dog" to a mansion employee who ultimately brought it back.

"The problem for the Cuomo team… is that the fervent denials from his office follow other past denials of things that were true," wrote New York Times reporter Shane Goldmacher.

Cuomo, who gave a farewell address on Monday criticizing the attorney general's investigation and taking swipes at his perceived enemies, sparked new outrage after the story was published.

"Captain deserves better," the organization said in a statement. "He will be welcomed with open arms (and paws) into one of our shelters."

"In case you needed any more proof that Andrew Cuomo was a narcissistic sociopath, he just abandoned his dog at the Governor's Mansion," she tweeted.

"I hope Captain finds a good home," wrote Rob Astorino, a Republican running for governor. "Getting a pet for PR reasons and for social media photos is selfish and wrong and people shouldn't do it."

Cuomo on Monday sought to relitigate his legacy before his resignation takes effect at midnight, touting his widely-criticized Covid response, green energy plan, infrastructure projects, and laws passed by the legislature to restrict guns and raise the minimum wage. But he couldn't help but get another shot in at New York City Mayor Bill de Blasio, a longtime critic, predicting that Democratic mayoral nominee Eric Adams would bring "competence" to the position. And, just as he did when he announced his resignation, Cuomo said he was stepping down to avoid a "governmental paralysis" while criticizing James' investigation.

"The truth is, ultimately, always revealed," he said. "The attorney general's report was designed to be a political firecracker on an explosive topic and it worked. There was a political and media stampede."

Cuomo announced his resignation as he faced looming impeachment proceedings by the New York Assembly, which investigated the harassment allegations as well as whether Cuomo abused his power during the pandemic to use state resources to write his memoir and provide VIP testing to relatives and allies when supplies were low. The Assembly is expected to continue its investigation and issue a final report.

Federal investigators are still looking at Cuomo's cover-up of nursing home deaths in the state after he issued an order for nursing homes to accept Covid patients as the virus ran rampant across the facilities.

At least five district attorneys have since opened investigations into allegations detailed in James' report.

Lt. Gov. Kathy Hochul is set to become the state's first female governor at midnight and has already picked two women as her top aides. Hochul vowed last week that no one would ever call her workplace "toxic" like they did with Cuomo after years of bullying and coercion.

"I have a different approach to governing," she said last week, "I get the job done because I don't have time for distractions, particularly coming into this position."