The vice president's traveling delegation was delayed from departing Singapore 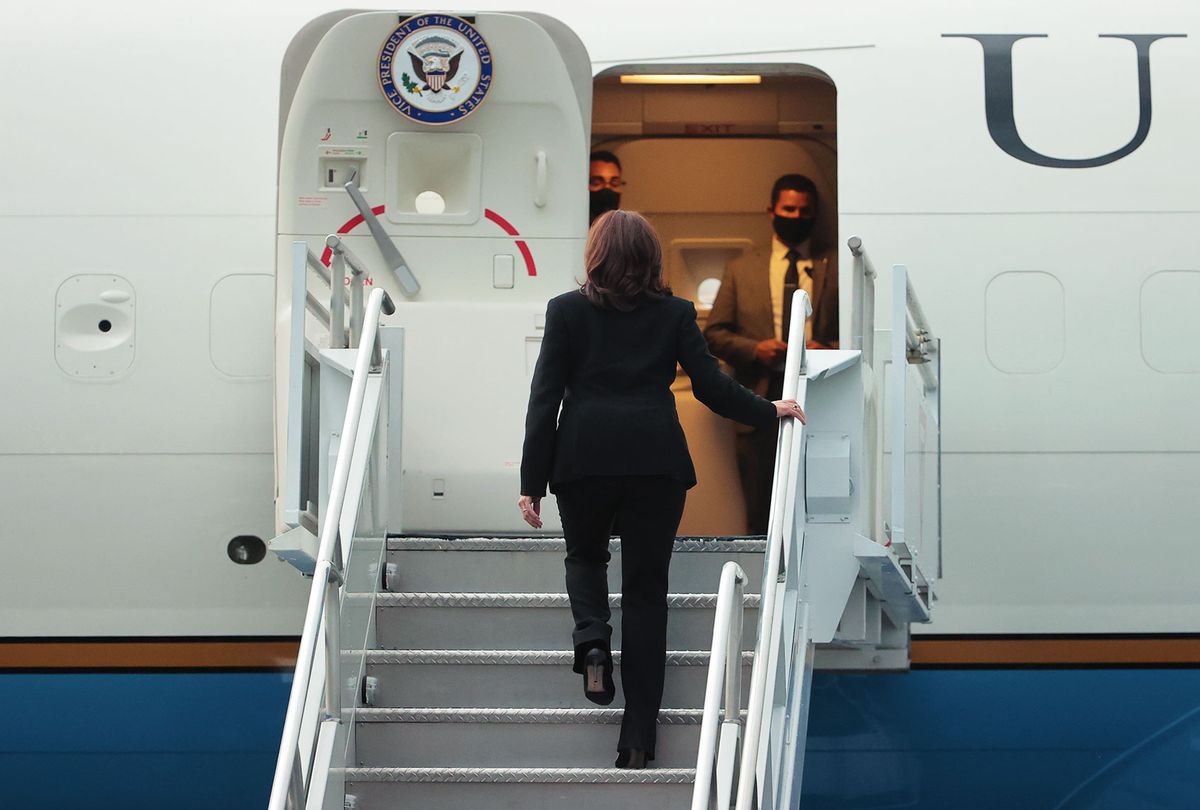 Vice President Kamala Harris board an airplane after an official visit to Mexico at Benito Juarez International Airport on June 08, 2021 in Mexico City, Mexico. The vice president was concluding her first trip abroad in an effort to address migration, declaring the need to assert control over the southern border but taking criticism for the stance at home. (Hector Vivas/Getty Images)
--

Vice President Kamala Harris' flight to Vietnam was delayed by several hours on Tuesday over fears that two U.S. diplomats in the country were affected by so-called Havana syndrome, a mysterious and debilitating condition intelligence authorities are still struggling to comprehend.

Harris' chief spokeswoman Symone Sanders made clear that the development has nothing to do with the present medical condition of the vice president.

Harris was currently in the middle of a three-day jaunt in Singapore, where she rebuked Chinese leaders in Beijing for "intimidation" and "coercion" of other parties in the South China Sea, over which the country has made territorial claims. "These unlawful claims have been rejected by the 2016 arbitral tribunal decision and Beijing's actions continue to undermine the rules-based order and threaten the sovereignty of nations," Harris said on Tuesday.

The U.S. intelligence community is still coming to grips with the strange condition, which has presented itself in over 130 people, according to The New York Times, including diplomats, spies, and soldiers. NBC News estimates that this number could be as high as 200. Some of those targeted have been completely debilitated by the syndrome, forced into an early retirement.

Havana syndrome first emerged back in 2016, when a number of U.S. diplomats and government agents in Havana, Cuba reported hearing high and low-pitched ringing sounds as well as pressure in their head. Some heard a "piercing directional noise" and experienced vertigo, nausea, and headaches. Physicians later confirmed via brain scans that many of those affected displayed the hallmarks of traumatic brain injuries.

Last week, U.S. diplomats said that multiple Americans officials were hit by Havana syndrome in Germany. Earlier this year, federal investigators confirmed they were probing two cases of the syndrome that apparently occurred on U.S. soil – one of them right near the White House.

According to CNN, frustrations are growing among rank-and-file staffers within the State Department, whose leadership they feel has not treated the illness with the seriousness it deserves.

The CIA's watchdog is currently carrying out a probe into how the first cases of the syndrome were handled, NBC noted. According to CIA Director Bill Burns, who called the condition "real, and it's serious," the agency has tripled the amount of staff currently working to identify the source of the mysterious syndrome.

American officials have speculated that the condition could be coming as a result of directed energy attacks by U.S. adversaries, like China or Russia. Scientists from the National Academies of Sciences, Engineering last year postulated that the condition might stem from a microwave weapon, but experts have so far failed to reach any strong consensus.