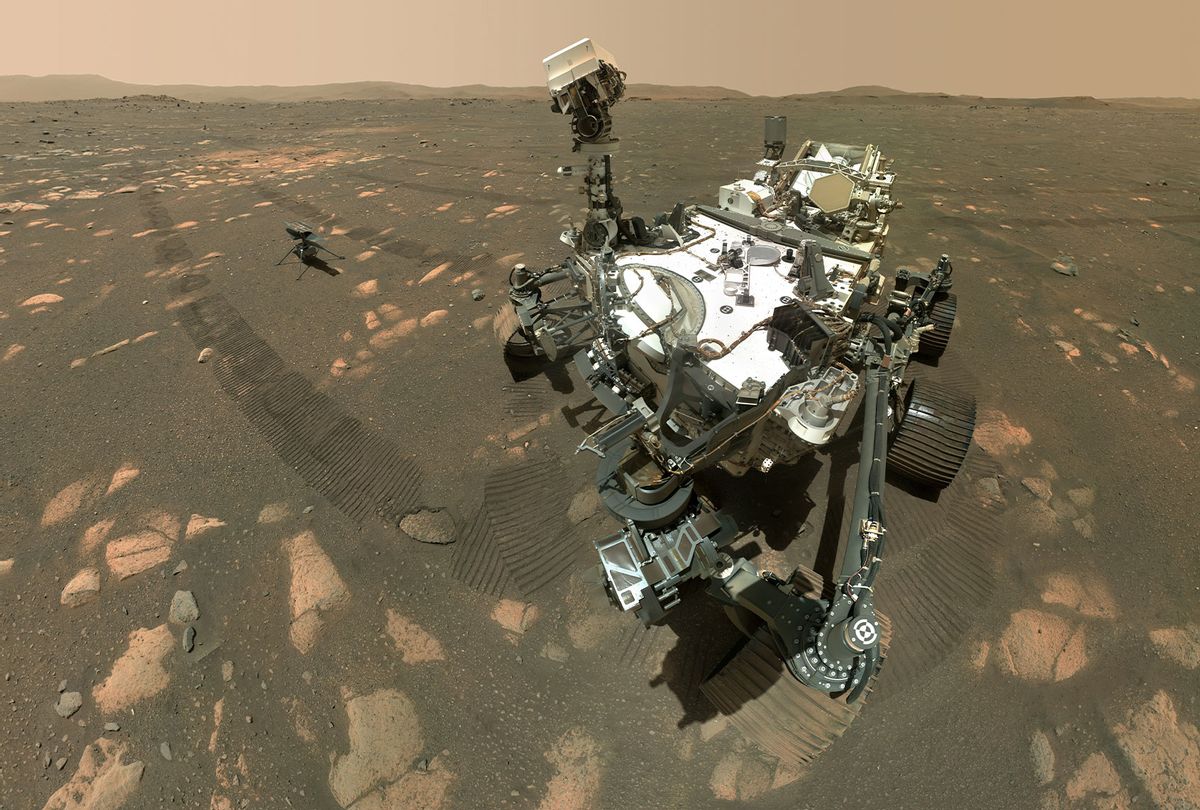 Earlier this month, the Perseverance rover set out to collect some rock samples on Mars. It was supposed to be a key moment in the rover's historic sample-return mission, one in which Perseverance was to collect, store and return Martian rock and soil samples to Earth. (The rocket that will pick up the samples hasn't launched yet, and may not for almost a decade; currently, Perseverance is doing the grunt work of collection.) To date, Perseverance had been highly successful: its risky landing worked perfectly, and Ingenuity, the 4-pound helicopter that hitched a ride to Mars on Perseverance's back, overcame massive barriers to become the first powered-controlled flight on another planet. Compared to those feats, Perseverance's next task — drilling out a finger-sized hole in a rock — seemed simple. But after the drilling, the collection tube came back empty. Mission control was in disbelief.

As Salon previously reported, scientists rushed to figure out why the sample went missing. Did the drill somehow miss? It didn't seem so — images from the Red Planet revealed there was a hole in the rock.

So what happened once the drill came out of the rock?

After some sleuthing, NASA's Perseverance team determined that the rock most likely crumbled into "small fragments" — essentially, a powder. While the pulverization of the rock sample was disappointing to the team, it was also a lesson in Martian geology.

"It's certainly not the first time Mars has surprised us," said Kiersten Siebach, an assistant professor of planetary biology at Rice University and participating scientist on the science and operations team for Perseverance. "A big part of exploration is figuring out what tools to use and how to approach the rocks on Mars."

Siebach explained that something similar sometimes happens to geologists here on Earth. Certain rocks look solid, their appearance having been retained by their chemistry. But weathering events and erosion can weaken that chemistry.

"If you've hiked in California, sometimes it looks like you're hiking next to a rock. But if you kick it, it falls apart into dust," Siebach said. "It's probably something like that, where there's been more weather than anticipated."

Mars is a curious place, geologically speaking. The surface of the planet is rocky, dusty; and thanks to previous missions like the Sojourner rover, Spirit, Opportunity and Curiosity, we know that the soil is toxic. High concentrations of perchlorate compounds, meaning containing chlorine, have been detected and confirmed on multiple occasions. In some spots, there are volcanic basaltic rocks like the kind that we have on Earth in Iceland, Hawaii or Idaho.

Raymond Arvidson, professor of earth and planetary sciences at Washington University in St. Louis and a Curiosity science team member, explained that one big difference between Earth and Mars though is that Earth has active plate tectonics — meaning that Earth's surface is comprised of vast, continent-spanning "plates" that move and shift and abut against each other, creating valleys and mountains. Such geology has given Earth places like Sierra Nevada mountain range. Mars, however, never had plate tectonics.

"So those very primitive rocks that are called the basaltic, like we have in the oceans — that's the dominant mineralogy and composition of rocks on Mars," Arvidson said. "It's basically a basalted planet — not as complicated as here, not as many rocks." Jezero Crater, a 28 mile-wide impact crater and former lake located north of the Martian equator, is where Perseverance touched town. Arvidson noted that the crater has diverse geology: "It has clays, it has faults and carbonate, many of them produced [around] three and a half billion years ago."

For that reason, scientists believe Jezero may be an ideal spot to search for ancient signs of microbial life on Mars. Perseverance is now headed to the next sampling location in South Seitah, which is within Jezero Crater.

Notably, the tubes and instruments on Perseverance were built to collect more solid samples, and that's because the aim of this mission is to see if these rocks contain evidence of microbes, or any ancient fossilized life.

"Do these rocks contain evidence for life?" Arvidson asked. "To answer those questions, you need to get the rock back to Earth."

Arvidson said that these soft sedimentary rocks that turn into powder when you drill are "everywhere" on Mars. Previous rovers encountered them too.

"For example with Curiosity, which landed in Gale Crater in 2012 — and we'd been driving up the side of the mountain called Mount Sharp — we encountered soft sedimentary rocks that were easy to drill, and we'd get powders back," Arvidson said. "Then we found really hard rock that we couldn't drill into, so we gave up. Jezero is going to have hard rocks and soft rocks."

As Siebach previously mentioned, what happened with Perseverance is a learning experience. Scientists, Siebach said, rely on a basaltic signal from orbit to determine the mineralogy and composition of Jezero Crater's floor.

"It's a little bit ambiguous. . .  we don't see a strong signal of hydration or something in these rocks in particular, instead, they look like most rocks on Mars which means they have a lot of these volcanic minerals and some dust on top," Siebach noted. However, orbital surveillance is not foolproof. "We don't know whether this crater floor was actually volcanic," Siebach added.

Hence, scientists won't always be certain about the consistency of the sample areas they choose to drill. But once on Mars, it's a mix of science, educated guessing, and luck to really find what they're looking for to bring back home.

"Some of these rocks could have a composition that makes it look igneous, when they could be sedimentary or igneous rocks," Siebach said. "That's the kinds of compositions we're seeing that makes it challenging and fun."

Siebach emphasized she has confidence that Perseverance will have success in sampling some of the other rocks.

"Those surprises and those unexpected events are what drives our curiosity and asking more questions, and learning more about this history of Mars that is written in these rocks," Siebach said. "If the sampling doesn't go as we expect, those surprises are inherent to discovery, and will drive us to learn more."

But the truly exciting science will happen when the samples get back to Earth eventually.

"We will be able to learn so much about Mars from those samples," Siebach said.