Nat Geo's "9/11: One Day in America" takes us inside the terror attacks with those who survived them

In this visceral four-night limited documentary series, survivors take us inside 9/11 with them, minute by minute 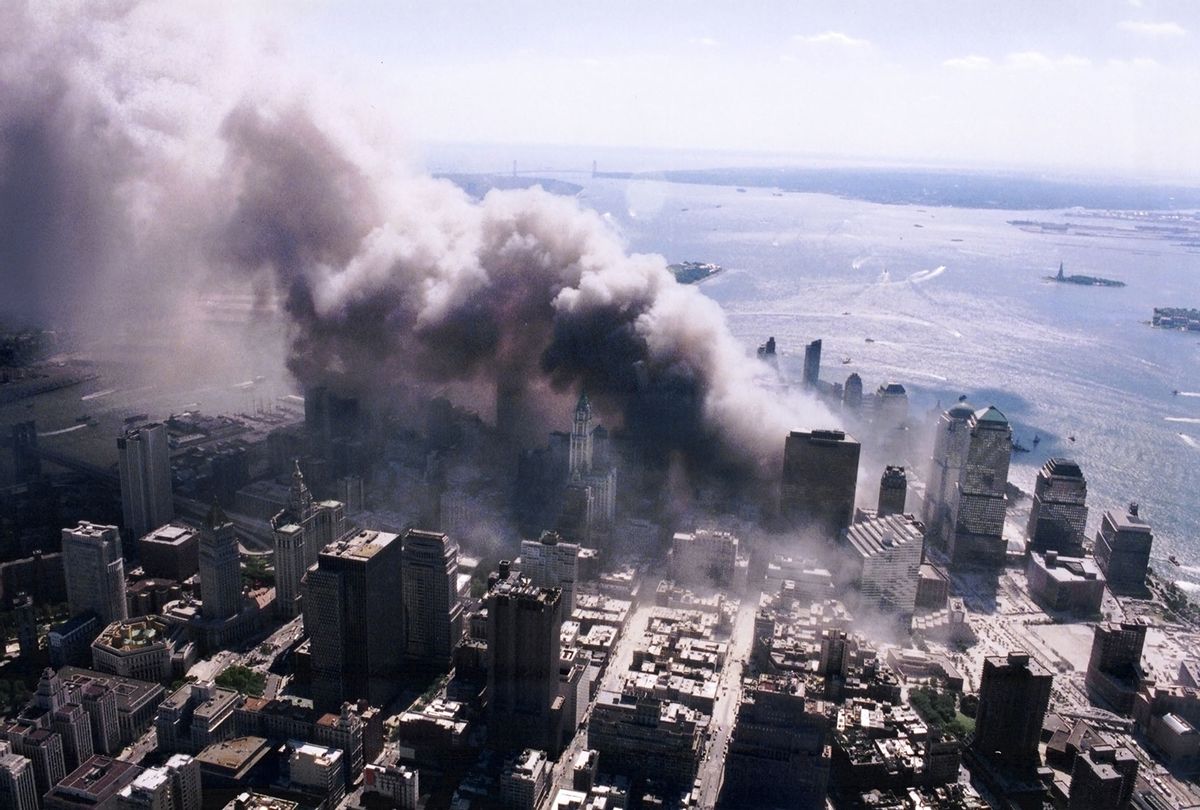 An aerial view of ground zero burning after the September 11 terrorist attacks. (NIST)
--

Ron Clifford remembers sharing the details of an important business meeting with his sister Ruth, who advised, "Ron, stand out." So he wore a new suit and a bright yellow tie. On that morning's ferry to Manhattan a man drinking champagne complimented his clothes, boosting his confidence.

Kevin Leary worked as a chef at the time, preparing sauces and pasta for a luncheon.

Joseph Pfeifer, a battalion chief with the Fire Department of New York, had 20 years and six days on the job. That meant he could have retired six days prior, but he was enjoying his time with the department so much that he wasn't even thinking about leaving.

It was a beautiful day, all told. Pfiefer and his crew were checking out a reported gas leak in a street. One of them was filming the job when American Airlines Flight 11 roared over them, seizing their attention before slamming into the World Trade Center's North Tower.

On September 11, 2001 terrorists attacked the United States by slamming that passenger jet and United Airlines Flight 175 into the World Trade Center's buildings, and a third, American Airlines Flight 77, into the Pentagon. But most Americans experienced these terrible events from through our televisions and radio reports, shocked and yet only able to imagine what New Yorkers were enduring. National Geographic's "9/11: One Day in America" closes that distance, taking everyone inside the smoke and flames, and terrible collapses of the buildings to relive each minute of those attacks with those who survived them.

The active horrors the disaster wrought unfolded in the span of a few hours, from the time the first plane hit through the second tower's collapse. But the accounts given by those who lived to talk about them fill every moment of this four-night, six-episode documentary series, making footage from that day come alive in ways few other reports have.

"9/11: One Day in America," produced in official partnership with the 9/11 Memorial & Museum, may be the most emotionally taxing examination of the events surrounding those attacks that you'll see this year. Hopefully the weight of that statement lands as it should, considering the slew of 20th anniversary commemorations debuting over the next couple of weeks. Encore presentations of previously released productions will certainly be part of this observance; we're not lacking for coverage of that day's events.

But as you experience these hours – not just watch, but feel them – what may immediately strike you is how antiseptic most of the documentary reports or news coverage have been. After the attacks the media's attention turned to the how and the why of them, offering deep dives into the structural collapse of the Towers, the government's failure to act on intelligence tip-offs or insights into how the hijackers planned and trained to turn passenger planes into weapons of mass destruction. Close your eyes and you can probably picture George W. Bush's grim face as he sat in that classroom, receiving the news. And there are all the accounts of those mourning their dead.

For the most part, though, coverage of the September 11, 2001 attacks all these years later enables us to emotionally separate from the human nightmare of it. To take that part in requires us to accept the fact that we are indeed vulnerable, that the actions of 19 zealots could take the lives of 2,977 people and injure more than 6,000 others.

If we couldn't do that before, executive producers Dan Lindsay and T.J. Martin make that possible by placing viewers inside the frightened, thumping hearts of people who were inside the towers and the first responders who ran in and up the nearly 100 flights of stairs of the North Tower to get people out. Through footage featuring Pfeifer and his team we see the first plane hit. We watch their reactions and those of other New Yorkers in that moment as that flawless Tuesday explored in flames and disintegrating concrete and steel. We watch as bystanders head toward the blast out of curiosity and hear as their companions scream at them to run for their lives. Then we see the disaster unfold in real time from different angles, from the air and on the ground, outside the rolling poisoning clouds and from inside, watching abandoned cameras continue rolling as the world darken in the moments after building crash to Earth.

"9/11: One Day in America" is the product of a massive undertaking, involving sorting through 951 hours of archival footage, including shots never seen before on TV, to build out a narrative of that day told by those who survived it, and in chronological order.

The filmmakers contextualize the footage from that day by editing present-day interviews with 54 survivors around it, some of which prominently features the interviewees. Seeing archival footage of a younger Pfeifer on that day, directing his men from the lobby of the North Tower while its top floors were in flames, is extraordinary in the way that it showcases his composure in the face of imminent death. His description of his inner turmoil in those moments places puts us right in the midst of anxious uncertainty with him.

And this experience isn't limited only to his portion. Footage of Clifford with a gravely injured woman he assisted that way reveals their panic and fear as they're running for their lives, but only after he describes every moment leading up to it – finding her still smoking from flames that burned her alive, sitting and praying with her to assure her she won't die.

The highly sensory focus of these hours can be overwhelming, especially when we see those unforgettable shots of of people jumping from the highest floors of the North Tower, choosing that kind of death over immolation. But in keeping with its insistent focus on the living, what stays with us is how those moments register from the firefighters' perspective that day – the dreadful thud of bodies hitting the ceiling above them, the absolute shock registering on their faces as they realize what's happening.

You may want to look away, but the eyes of the men remembering that day as they lived it hold us. By having subjects speak directly into the camera, the filmmakers create an intimacy between the survivors and the viewers that makes is easier to bear witness and relive that nightmare with them and for them. To absorb the enormity of it. Leary, for example, talks about a choice he made that saved his life by a matter of seconds, whereas another wasn't so lucky. He still wears the wide-eyed shock of it as he recounts the memory. If you're moved to weep in the course of watching this, or have other intense reactions, that's part of bargain. It's only a portion of what these survivors felt and continue to feel.

"9/11: One Day in America" isn't entirely immersed in horror, however. The filmmakers include notes of hope at every turn, structuring each episode around a particular story that contains the simplest of mysteries. Will anyone come to save me? Did my friend survive? How am I going to make it out of this hell? Will I get to walk my daughter down the aisle on her wedding day?

Episodes are edited in such a way to make the most of this human drama without cheapening each individual's accounts, circling back to reveal endings of rescue efforts that sound hopeless at first. Sometimes it turns out that they are. But the editing choices maintain the tension of not knowing, even though those telling these stories know how they end, without robbing them of their integrity. Then, by sticking us back inside blinding clouds cut by falling, flaming debris as the tales unfold, we obtain a visceral sense of how dire every second was, that living through it was indeed a miracle.

Through its subject, the documentary carefully honors the people whose sacrifices made all the difference, like the small team of firemen who kept heading up stairs to save more than 70 people and never made it out. Or the three-man security team who stayed behind to make sure all of their 2,000 people escaped, and were still inside when the second Tower collapsed on top of them. Or, of course, the group of people who overpowered the hijackers of United Airline Flight 93, including a young man whose mother called him to tell him what was going on and encouraged him to fight for his life – hoping, she says, that her son could be a killer.

For all the devastation, Pfeifer recalls, "There were also signs of hope. And at this extraordinary time in history, those little moments of caring for another were the difference between life and death."

Twenty years hence America is contending with other disasters. The COVID-19 pandemic has claimed hundreds of thousands of American lives, and the death toll is still escalating. In Afghanistan, the war launched in retaliation for the 9/11 attacks is finally ending; America is not victorious and worse, other terrorists are attacking personnel on their way out. It all has a terrible symmetry to it.

And yet, the main message "9/11: One Day in America" leaves with a person is a reminder of how delicate and precious life is. Sometimes it does this joyfully, as with one subject who attributes her survival by simply being determined that the building was not going to take her away from her family.

Others like Frank Razzano, a lawyer who barely made it out of the North Tower's adjoining Marriott Hotel, make that point sorrowfully as he explains that his reflexive instinct upon heard the first crash was to secure the legal documents he had with him. "I was at the apex of my career at this time," he said, acknowledging how silly that sounds in the face of death.

All this is completely relatable because we view September 11, 2001 through his eyes and his memory, not through a newscaster's lens. To him and everybody else, it was a normal, peaceful day.

"Not a cloud in the sky," Clifford recalls at the top of the premiere installment. Who would have gussed that a few hours later the World Trade Center towers would be gone, that ash would black out the sun and concrete particulates choke the air? It was still the same day, and yet in the space of a few hours a new era began. "This was my world," Clifford observed, "never to be the same again."

"9/11: One Day In America" airs over four consecutive nights at 9 p.m. starting on Sunday, Aug. 29 on National Geographic, with episodes available the next day on Hulu.