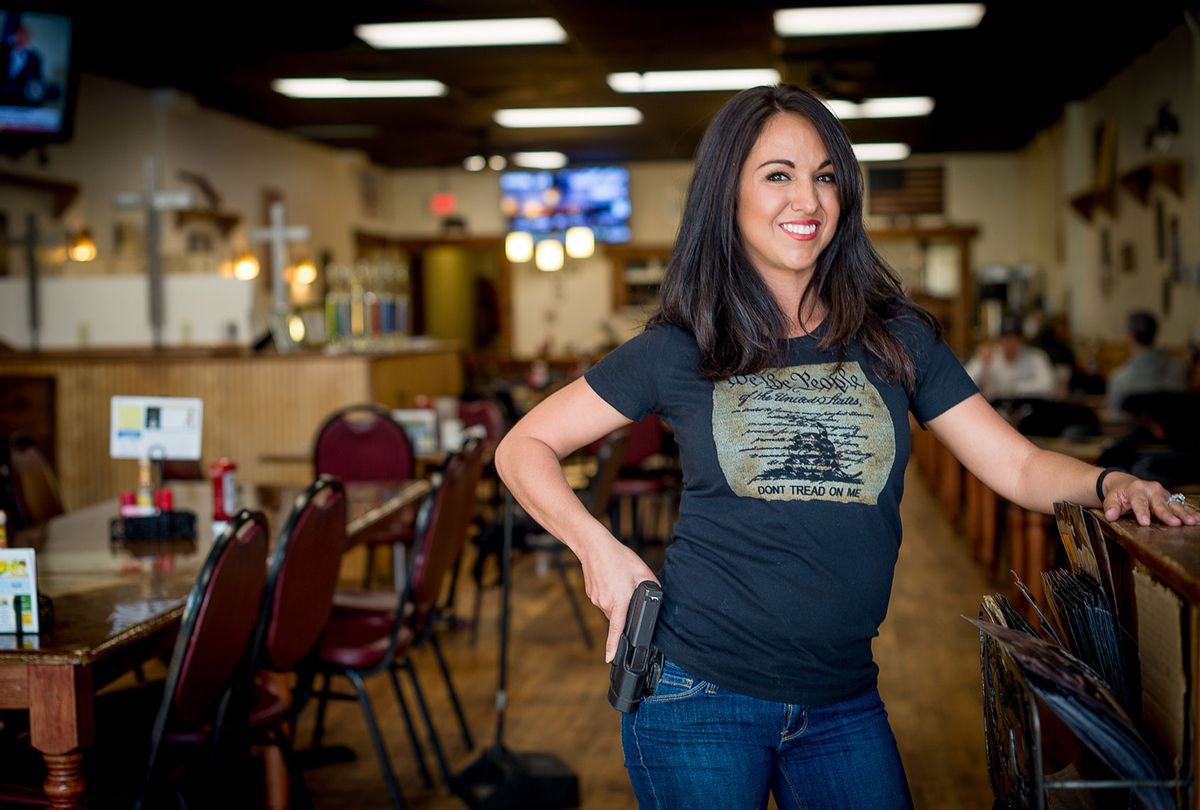 In a video reviewed by Salon and apparently recorded on July 25, the 8-year-old son of Rep. Lauren Boebert, R-Colo., can be seen singing, dancing and playing with cigarette lighters — while left alone in a room a few feet away from a high-capacity rifle. This would appear to violate a new Colorado state law, under which gun owners are required to store their deadly weapons in a gun safe, with a trigger or cable lock, whenever the owner is aware, or should reasonably be aware, that a "juvenile or a resident who is ineligible to possess a firearm can gain access to the firearm."

As a newly-elected member of Congress in February, Boebert was widely criticized after appearing at a House Natural Resources Committee meeting via Zoom before a backdrop of a bookshelf bearing several high-capacity weapons.

In response to the outcry, the far-right lawmaker fired back on Twitter by suggesting that the weapons were loaded, posting, "Who says this is storage? These are ready for use." Additional photos of the firearms in question suggest that two of the rifles were loaded with 30-round magazines and a third with an even larger magazine. Firearm magazines that hold more than 15 rounds of ammunition at any one time, such as those Boebert appears to possess, have been banned in Colorado since 2013. 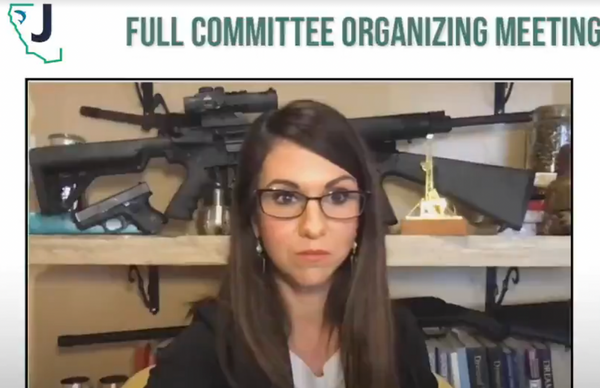 The bookshelf and chair seen in that February Zoom call are also visible in several of the videos featuring Boebert's son, which indicate that she was in the bedroom of her home in Silt, Colorado, for the congressional meeting.

In the July 25 video, Boebert's son is seen dancing alone in that same bedroom, close to a weapon that appears to be one of the same rifles seen loaded during the February Zoom call. It's in a different position in the July video, leaning casually against the headboard of a bed, near what appears to be a handgun lying on the floor. 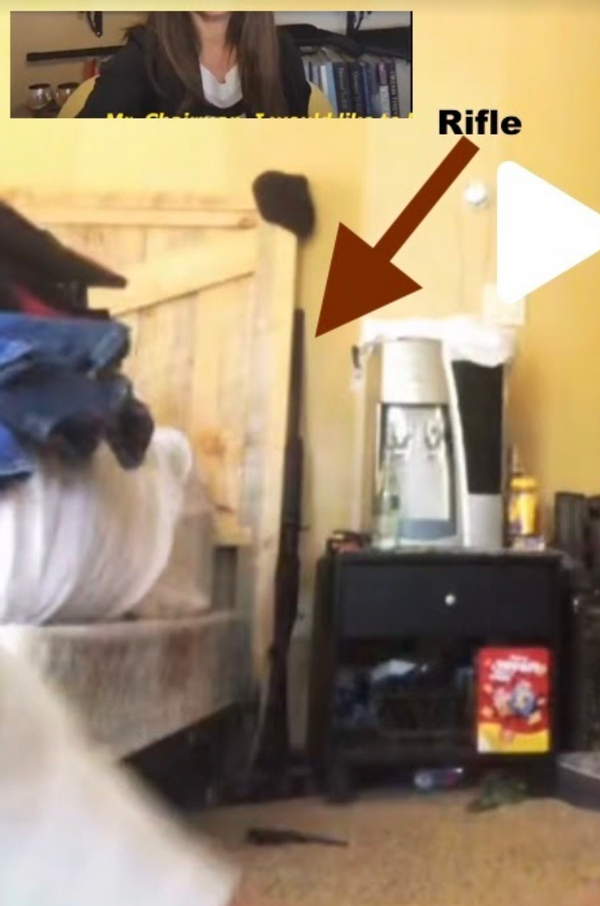 Boebert did not return Salon's request for comment on this story.

That high-powered rifle is still visible in a video posted by Boebert's son in late August, in which he shows off his abdominal muscles. Several TikTok videos viewed by Salon reveal that Boebert's son was playing in the bedroom, at times with two young friends, but with no parental supervision. 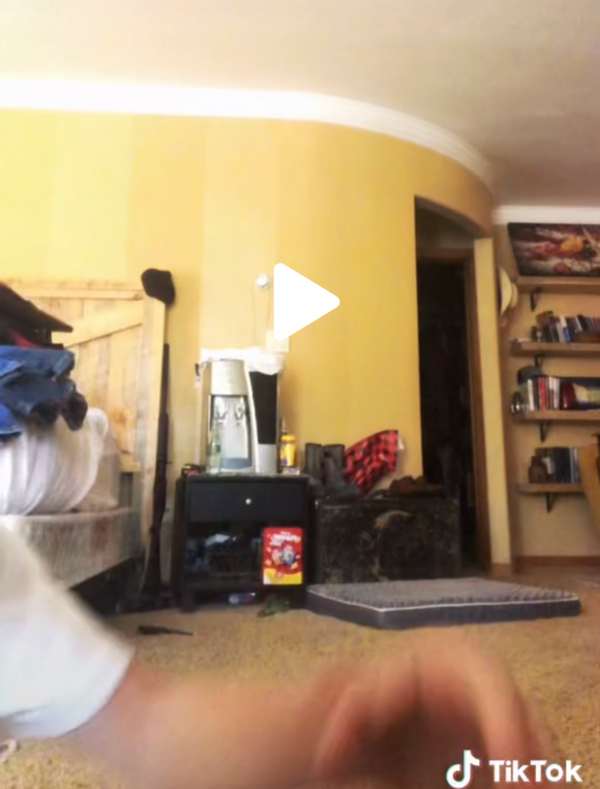 Boebert appears to have been home during the weekend her son posted the video showing the rifle. On July 24, she appeared at the Mesa County GOP Lincoln Day Dinner with Rep. Jim Jordan, R-Ohio. On the morning of Sunday, July 25, Boebert spoke at Faith Heights Church in Grand Junction, Colorado, about an hour away from her home in Silt.

In one video, Boebert's son says that Donald Trump "is the real president, not Joe Biden — Joe Biden sucks." Then he explains, "My mom is Lauren Boebert" before describing a red cigarette lighter as Biden and a green lighter as Trump. In several other videos, Boebert's son lights and relights the lighters, tossing them on the floor behind him towards the rifle.

Boebert is well known for requiring her employees at Shooters Grill, the restaurant she owns in Rifle, Colorado, to carry firearms, and ought to be well versed in proper gun storage protocols. A training company called Legal Heat has conducted numerous concealed-firearm training sessions at Boebert's restaurant. A similar training session on safely and correctly storing firearms would also be required for a concealed carry permit, which the lawmaker received in Washington, D.C., earlier this year.

"Storing firearms securely is one of the simplest ways to prevent gun violence, especially when unintentional shootings are rising at an alarming pace," Nick Suplina, managing director of law and policy at Everytown for Gun Safety, told Salon. "Almost every day in the United States, a child gets their hands on a gun and unintentionally kills or injures someone. In fact, research from Everytown shows that there have been at least 259 unintentional shootings by children so far this year."

In 2018, Boebert explained gun safety by saying, "Accidents happen by being careless or ignorant. Either people don't know what they're doing, or they think they know everything."

She has ignored safety measures designed to protect children in the past. Boebert pled guilty to failing to use child restraints while driving in 2011 and was charged with the same offense in 2017 but pled guilty to a lesser charge. In May 2020, Boebert said that she had not had health insurance for her four sons for the previous three years, "We're a family of six, and we haven't had health insurance for, gosh, maybe three years, maybe more than that."

Violations of Colorado's new gun safety law are classified as Class 2 misdemeanor offenses that carry penalties of fines and, in rare instances, jail time. In April, a spokesman for Boebert told the Wall Street Journal that the congresswoman has concerns about "the government deciding for citizens what would qualify as safe-storage standards."

"Colorado is one of the many states that has taken action on this issue to save lives," Suplina added. "Since July 2021, a person who does not ensure that their firearms are both stored securely and rendered inaccessible to a child or prohibited person can be charged with a crime."