Why Donald Trump is now using Robert E. Lee to rehab his own reputation

Trump thinks "genius" Robert E. Lee would have won the war in Afghanistan 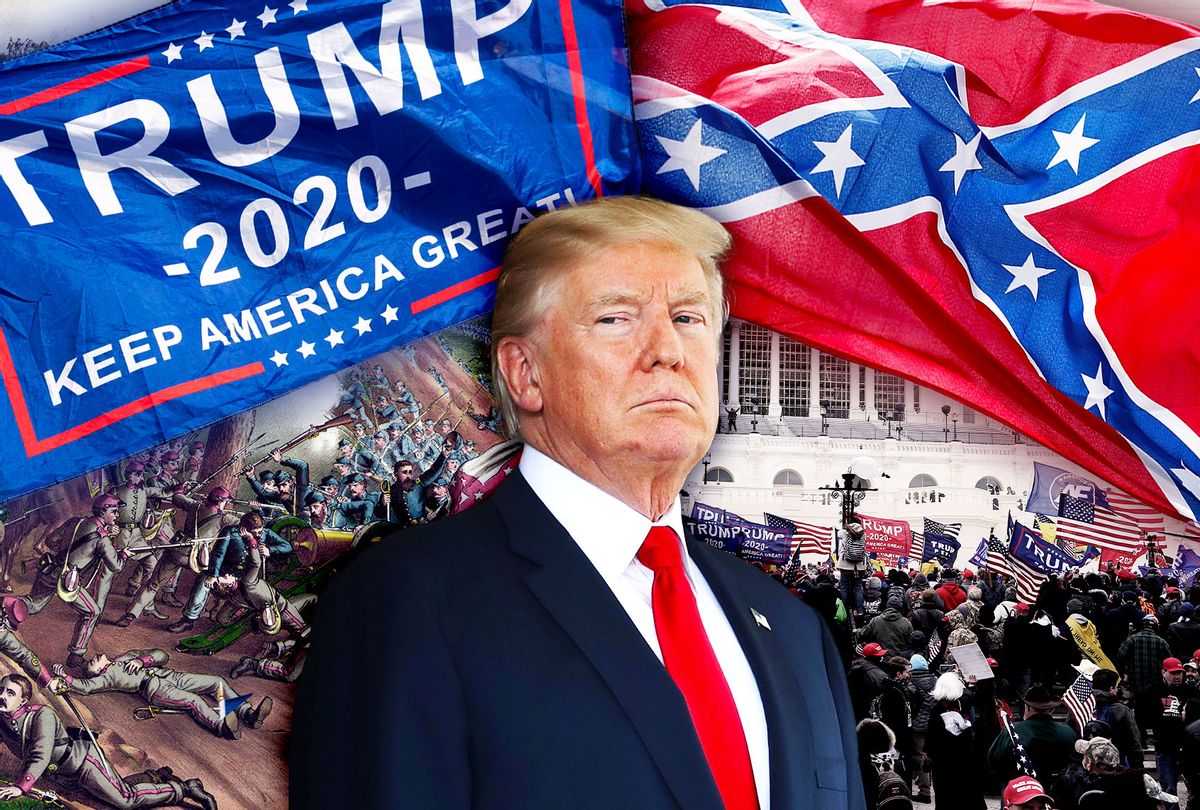 Donald Trump, a painting of the Confederate army losing and the January 6, 2021 US Capitol Riot (Photo illustration by Salon/Getty Images)
--

As we commemorate the 20th anniversary of 9/11 this weekend it's hard not to think of how different everything would have been over these past two decades if it had never happened. The attacks changed America in some fundamental ways and I'm not sure we've ever fully grappled with it. Our government responded in a primitive, unthinking way and unearthed an enduring weakness in our national character that continues to haunt us to this day.

We should have known that when Dick Cheney, the vice president at the time, appeared on television just days after the attacks and announced that the country would have to go to "the dark side" and "use any means at our disposal" that we were going down an immoral path that would lead us to an ignominious end. And it did.

Spencer Ackerman, author of "Reign of Terror: How the 9/11 Era Destabilized America and Produced Trump" makes the case in his book that the ongoing war on terror primed the country for MAGA nihilism and violence by demonizing Muslims and "the decadent left" which Trump successfully capitalized on in his run in 2016. I think there's something to that.

Trump instinctively understood the undercurrent of racist violence that was electrified when he "took off the gloves" and he used it to great effect, spending hours on the campaign trail repeating lurid details of alleged deviant criminality by immigrants and insisting that torture works, gleefully promising to do more of it with descriptive detail. One of his greatest hits was endorsing an apocryphal story about General Blackjack Pershing dipping bullets in pig's blood before he summarily executed Muslim prisoners in the first World War. His campaign was drenched in violent rhetoric and yet somehow the fact that he had read the polls and determined that the "forever wars" were unpopular — and unwittingly appropriated the isolationist slogan of the pre-WWII era, "American First" — he got a reputation as some kind of anti-war pacifist. Recall that New York Times writer Maureen Dowd even characterized him as "Donald the Dove" in one notorious column.

His followers, of course, never believed it. Trump was a bloodthirsty leader, and they knew one when they saw one. He was just going to wage his war at home — and that suited them just fine.

As it turned out, this left Trump with a conundrum as president. He actually saw himself as a great warrior leader but he couldn't pull the trigger on a big military adventure. I always suspected that it was because he was justifiably insecure about which way to turn and relied on his 2016 promise to keep from having to test himself in that way. Instead he talked loudly and carried a small stick. At one point in 2019 during a joint appearance with the Prime Minister of Pakistan, he said:

For all his chillingly inane bluster, he clearly didn't have a firm grip on national security and foreign policy, consistently falling back on stale bromides about trade and antagonizing allies he knew were no threat while kissing up to tyrants and dictators. He constantly fought with his military advisers, seeing them as "losers" who didn't know how to win wars, but never really had the nerve to do what he always threatened to do which was unleash the full might of the U.S. military. (Thank God!)

Now that he is out of office, ensconced in temporary exile at one of his resort palaces, anticipating his full return to campaigning, he is busily re-writing the story of his presidency to fit the current facts. Early in the process he took credit for negotiating the withdrawal with the Taliban and insisted that Biden was dragging his feet. In April, he said, "Getting out of Afghanistan is a wonderful and positive thing to do. I planned to withdraw on May 1st, and we should keep as close to that schedule as possible." He boasted two months later, "I started the process. All the troops are coming back home. They couldn't stop the process."

Then during the chaotic final days in Kabul last month, he frantically shifted his posture.

As Trump saw the right revert to its warmongering ways, he saw the opportunity to airbrush his involvement and pretend that he had the war "won" until Biden surrendered. He said that the situation was not acceptable and demanded that President Biden "resign in disgrace for what he has allowed to happen to Afghanistan." Babbling incessantly about the mostly defunct military equipment left behind, he declared that if the Taliban didn't return it, "we should either go in with unequivocal Military force and get it, or at least bomb the hell out of it."

Now, during this week of commemoration of 9/11 and the beginning of that misbegotten war from which we have finally, painfully, withdrawn military troops, Trump has outdone himself.

On the occasion of the removal of the statue of Robert E. Lee from the capital of Virginia, he managed to thread together his grotesquely racist impulses, his embarrassing ignorance of history and his incompetent national security and foreign policy leadership all in one stunningly stupid statement:

"Robert E. Lee is considered by many Generals to be the greatest strategist of them all. President Lincoln wanted him to command the North, in which case the war would have been over in one day. Robert E. Lee instead chose the other side because of his great love of Virginia, and except for Gettysburg, would have won the war ... If only we had Robert E. Lee to command our troops in Afghanistan, that disaster would have ended in a complete and total victory many years ago. What an embarrassment we are suffering because we don't have the genius of a Robert E. Lee!"

That is the very stable genius who has the entire Republican party on its knees begging for his favor.