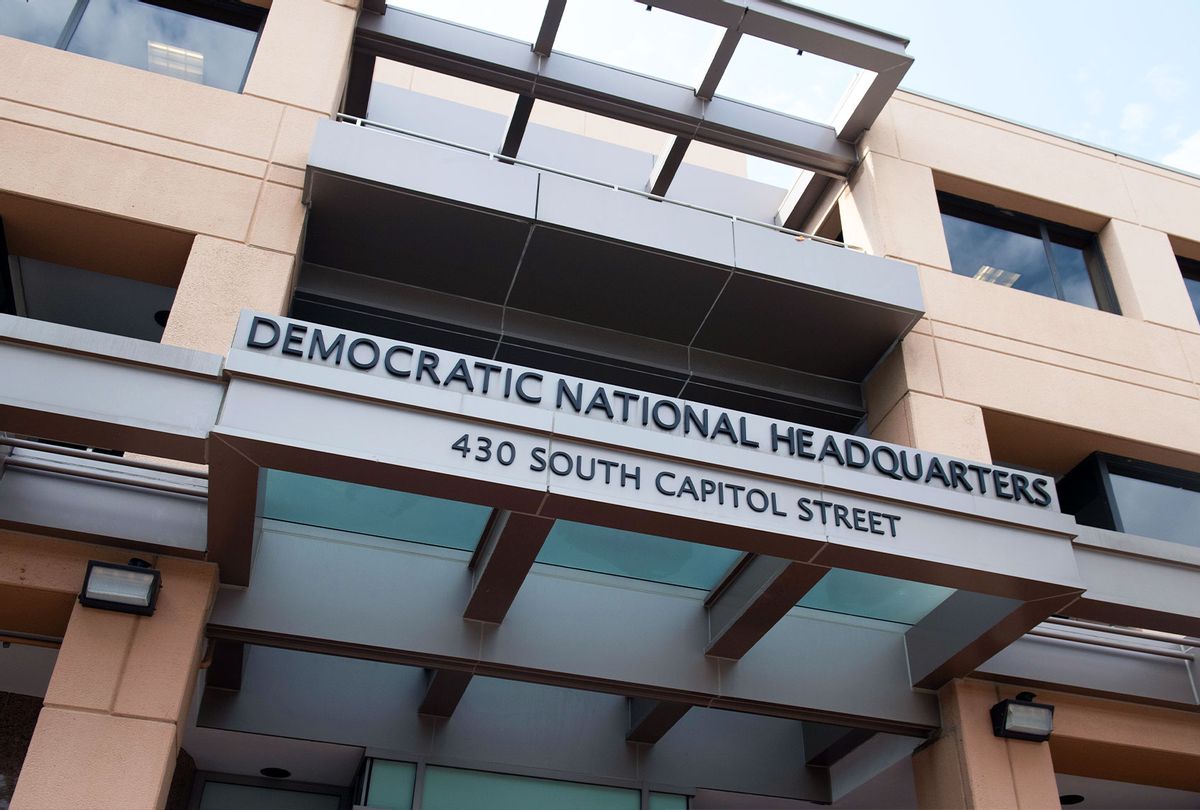 The headquarters of the Democratic National Committee (DNC) is seen in Washington, DC (SAUL LOEB/AFP via Getty Images)
--

The U.S. Capitol police said they've arrested a California man with a bayonet and machete outside the Democratic National Committee headquarters in Washington on Monday.

According to federal authorities, the man was first noticed on Sunday at midnight parked beside the building with his Dodge pickup, which had sported a picture of an American flag in lieu of a license plate. His truck was decorated with swastikas and other white supremacist symbols, authorities said.

The driver, 44-year-old Donald Craighead of Oceanside, was shortly pulled over by authorities, who said Craighead possessed a machete and a bayonet, both of which are illegal in the District of Columbia.

Craighead reportedly told police he was "on patrol," according to NBC News, and spewed various white supremacist rhetoric.

"This is an excellent example of the work our officers do every day," said Operational Services Bureau Deputy Chief Jason Bell. "We are so proud of these officers for their vigilance."

Chief Tom Manger echoed: "We applaud the officers' keen observation and the teamwork that resulted in this arrest."

"​​At this time, it is not clear if he was planning to attend any upcoming demonstrations or if he has ties to any previous cases in the area," the Capitol Police added.

According to CNN, the Capitol Police Board has asked that temporary fencing be erected around the Capitol building ahead of the conservative "Justice for [January 6]" rally scheduled for September 18. One Democratic congressional aide told Reuters that a number of right-wing groups – like the Oath Keepers and Proud Boys – are expected to attend the event and may target police officers.

House Speaker Nancy Pelosi, D-Calif., has invited a number of top congressional leaders to convene a security briefing with Manger to discuss security for the rally. On Wednesday, the Capitol Police said that a "robust security posture" is being prepared.

The incident comes just a month after a similar confrontation in which a man, who attended the "Stop the Steal" rally, was arrested just outside the Library of Congress for threatening to blow up the building. The incident – which prompted numerous evacuations – saw implicit support from Rep. Mo Brooks, a loyal Trump backer.

"Although this terrorist's motivation is not yet publicly known, and generally speaking," Brooks said. "I understand citizenry anger directed at dictatorial Socialism and its threat to liberty, freedom and the very fabric of the very fabric of American society. The way to stop Socialism's march is for patriotic Americans to fight back in the 2022 and 2024 election."

According to an analysis last year by the Center for Strategic International Studies, right-wing terrorism has steadily risen over the past six years, accounting for the majority of all terrorist incidents in the United States since 1994.