Simone Biles and other gymnasts testify: "I blame an entire system" for enabling Larry Nassar 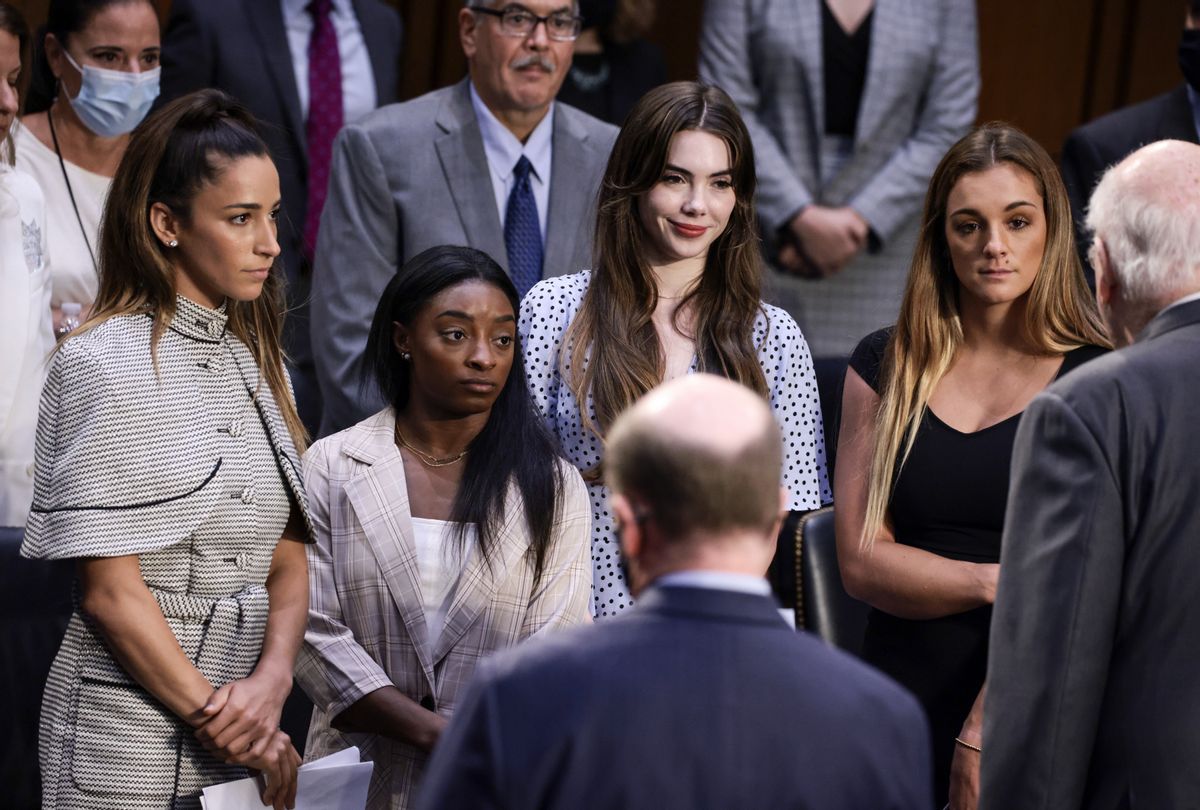 As Larry Nassar continues to serve his 175-year prison sentence for sexually abusing hundreds of young, female gymnasts, a group of his survivors testified before the U.S. Senate on Wednesday afternoon about the handling of the case. Simone Biles, Aly Raisman, McKayla Maroney, and Maggie Nichols testified once again about their experiences surviving unspeakable sexual trauma at the hands of Nassar — and also rightfully criticized the leaders, systems and institutions that failed them, according to the New York Times

The institutions named in enabling the widespread, systemic sexual abuse includes USA Gymnastics, Michigan State, the Olympic Committee, and of course, the FBI, which received reports from USAG about Nassar's abuses in 2015 and took no action for almost a year. During the hearings, FBI Director Christopher Wray revealed hat an FBI agent involved in the Nassar investigation had been fired, as if a systemic failure can be neatly pinned on an individual.

"To be clear, I blame Larry Nassar and I also blame an entire system that enabled and perpetrated his abuse," Biles told the Senate, per reporting from CNN. "USA gymnastics and the United States Olympic and Paralympic committee knew that I was abused by their official team doctor long before I was ever made aware of their knowledge."

Maroney, a gold medalist at the 2012 London Olympics, slammed the FBI's mishandling of her reports of Nassar's abuse. "Let's be honest, by not taking immediate action from my report, they allowed a child molester to go free for more than a year," Maroney testified, in a clip published by MSNBC. "And this inaction directly allowed Nassar's abuse to continue."

She continued, "What is the point of reporting abuse if our own FBI agents are going to take it upon themselves to bury that report in a drawer? They had legal, legitimate evidence of child abuse, and they did nothing."

Maroney is specifically referring to the investigation that revealed the FBI's inaction to help victims of Nassar's abuse. On Wednesday, Maroney alleged that the FBI didn't just bury her reports against Nassar. "They falsified my statement, and that was illegal in itself," she said.

A supervisor at the FBI who was also singled out in the investigation for violating protocol and false statements retired from the agency back in January of 2018, according to CNN.

Raisman, a two-time Olympic champion, pointed out that even today, we still don't know just how many people were aware of and enabled Nassar's crimes, according to CNN. "Without knowing who knew what when, we cannot identify all enablers or determine whether they are still in positions of power," she said. "We just can't fix a problem we don't understand, and we can't understand the problem unless and until we have all of the facts."

The rest of the Senate hearings went as expected, considering how frequently Nassar survivors are forced to come forward, only for almost nothing to change. Director Wray told the survivors who testified that he was "deeply and profoundly sorry," and U.S. Senators also apologized to the women who testified, and commended their bravery.

We've seen some rendition of this before, a handful of times since 2018. The same young women who were victimized by Nassar and failed by adults who should have taken care of them are left to be "brave" and clean up a mess that top officials should have never allowed in the first place. Praising the courage of Nassar victims, as if they had any choice but to be brave in a system that failed them, has become something of an empty platitude from politicians and leaders who could actually be taking tangible actions to help them.

Nassar's survivors are once again forced to relive their traumas on a national stage in the hopes of some small amount of change — all while, as Raisman points out, so much remains unknown about the systemic corruption and rot at the heart of USAG, the FBI, the Olympic Committee and other institutions.

If anyone should be honored following the latest Nassar hearings, it's not the FBI, but the gymnasts like Biles who are doing everything they can to protect future generations from harm. "I don't want another young gymnast, Olympic athlete or any individual to experience the horror that I and hundreds of others have endured before, during and continuing to this day, in the wake — of the Larry Nassar abuse," Biles said before the Senate.