Simone Biles' long history of making history: A timeline of her medals, moves and leadership 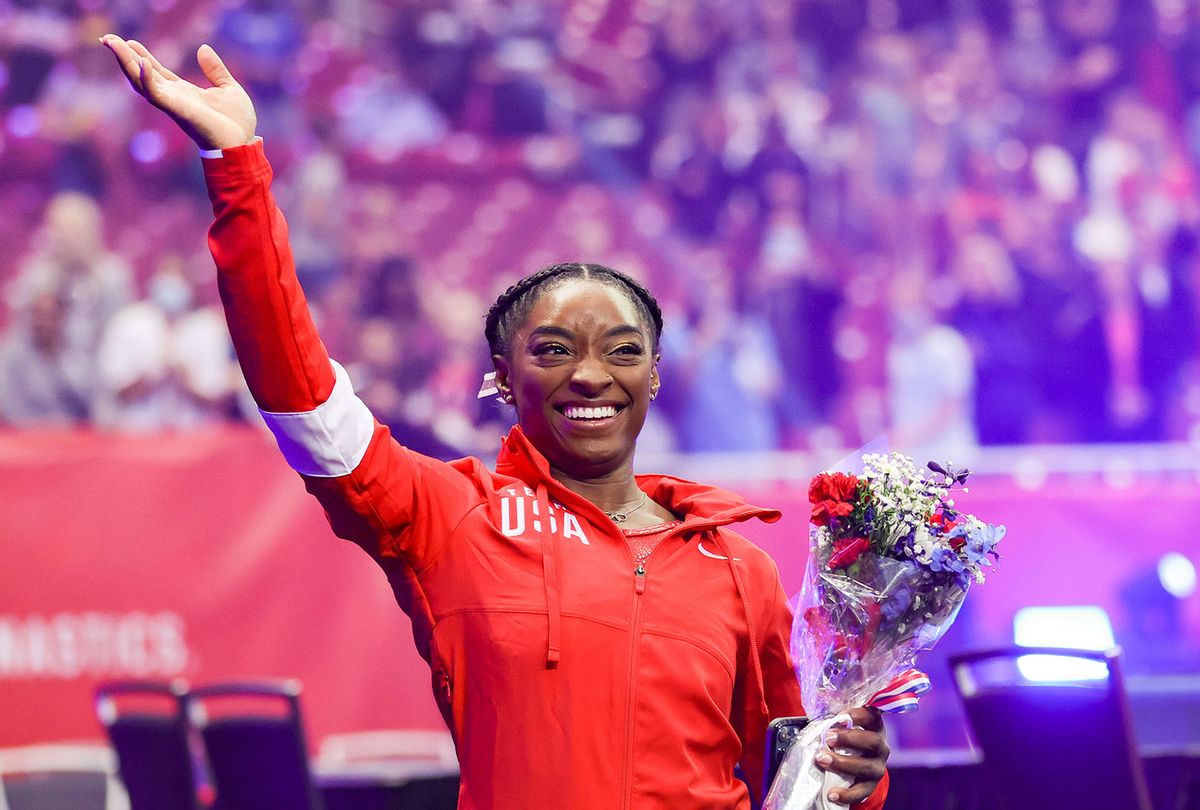 Simone Biles waves to the crowd as she exits following the Women's competition of the 2021 U.S. Gymnastics Olympic Trials at America’s Center on June 27, 2021 in St Louis, Missouri. (Carmen Mandato/Getty Images)
--

In some very much expected but still exciting news, Olympic gold medalist Simone Biles is headed to Tokyo to lead the U.S. women's gymnastics team, the members of which were selected this weekend, reports ABC. Biles, who is widely regarded as the greatest women's gymnast and among the greatest athletes of all time, will be joined by five first-time Olympians: Sunisa Lee, Jordan Chiles, Grace McCallum, Jade Carey and MyKayla Skinner.

As for gymnastics-specific records, Biles could tie or break the record for most individual gold medals in gymnastics, since the current record stands at seven and Biles already has three going into Tokyo. She could also become the first woman to win back-to-back Olympic all-around titles in more than 50 years.

If there's one thing Biles is known for, it's record-breaking, and pioneering moves so impossible that they're given names like "the Biles." She's always lived up to the hype, and 2021 is shaping up to be her year.  To get a fuller look at her accomplishments, we revisit some of that history, as Biles could very well make even more history in Tokyo.

For some context, the last time Biles didn't win a U.S. all-around competition, President Barack Obama was just starting his second term in 2013. In that year, Biles placed second at the American Cup, and at the Chemnitz Friendly competition, just behind future, fellow-Olympian Kyla Ross.

Think about that. It's been nine years since she's known what it feels like to come in second place. Biles has dominated at U.S. all-around competitions ever since.

In 2014, 2015, and 2018, Biles became the first American woman to win four titles at a world championship competition. In 2019, which, at the time, we believed would be the year before the scheduled 2020 Tokyo Olympics, Biles shattered this previous record she'd set, and won five world titles.

Put simply, as Biles herself has declared via GOAT-bedazzled competition leotards, she's the greatest of all time.

Her path to Tokyo in the past year

Despite her dominance, Biles had a few moments when it seemed that Tokyo would not be in the cards. In March 2020, she had to pull out of the Tokyo World Cup competition due to the ongoing COVID-19 pandemic.

Throughout quarantine and training, Biles revealed in an interview with "60 Minutes" that she had had serious doubts about whether she would even compete in Tokyo in 2021, and even considered retiring.

"I just sat there and I was like, 'I really don't know how I'm going do this,'" Biles recounted. "Mentally, that was going to be the hardest part because pushing through those trainings when I had in my mind, 'In three months I'll be done,' it's like, how do you push back for another year?"

Luckily for us, Biles did "push back for another year." In June 2020, practicing at the gym after several months in quarantine, Biles landed a a triple-double dismount off of a balance beam in a stunning first.

At that point, it seemed that her ongoing Olympic dreams would not be denied.

In May 2021, we all heard about how Biles has dazzled when she debuted the Yuchenko double pike at the U.S. Classic. She went on to win that competition's title.

Earlier in June, Biles won the U.S. Gymnastics Championships all-around title – her 7th – by a significant 4.7 points and qualified for the Olympic Trials. She placed first in the vault, balance beam and floor exercise, as well as third in the uneven bars.

At the recent Olympic Trials, Biles once again came in first in the All-Around by a margin of 3.8 points ahead of her teammate Sunisa Lee, first in vault and floor, and third on balance beam and uneven bars.

Having one move named after you is iconic enough — imagine having four.

Since landing the double pike, a stunning vault move that consists of a round-off onto the springboard, back handspring on the vaulting table, followed by several flips in the air, in May, all eyes have been on Biles, amid speculation about what she might have in store for Tokyo.

But the double pike isn't even the only skill that Biles is the first woman to ever successfully complete in competition. As early as 2013, Biles was pioneering new moves, including her signature floor move featuring a double layout with a half twist. This move, since given Biles' name, had to be added to the women's gymnastics code of points that year.

Later, at a 2018 world competition, Biles first performed a never-before-completed vault skill, including a roundoff entry with a half twist on the vault table, and a somersault with two twists. The following year, Biles exploded in competition for two new moves named after her, on the floor and on the beam. On the floor, Biles completed a triple-double with three twists and two flips in a tucked position, which became the first skill in women's gymnastics to receive full points. At the same world competition, Biles became the first woman to perform a double-twisting double-back dismount off balance beam, but received only an H-rating, which is essentially an 8 out of 10.

In addition to Biles' history of record-smashing and pioneering new, shocking moves, there's also been a frustrating history of these moves not always being rewarded with the scores they deserve, in part because, as the New York Times has reported, judges fear this could incentivize other women gymnasts to try to imitate these perilous moves, and harm themselves. Yet, it's often pointed out that other trailblazing, often white, male athletes with skill sets their peers can't match are praised and rewarded for this, Biles, a Black woman, is punished.

Biles' legacy as an athlete and role model extends far beyond her dominance in competitions. In 2018, she opened up on Twitter about being sexually assaulted by former USA Gymnastics physician Larry Nassar, who had assaulted thousands of other young, female gymnasts. Further, Biles spoke out against USA Gymnastics for its role in allowing the abuse to occur and covering it up. Later that year, Biles and other survivors of Nassar's abuse were honored with the Arthur Ashe Courage Award.

In Biles' statement on surviving the assault, she wrote about struggling to come to terms with the abuse she faced, and the time it took her to realize that none of it had been her fault.

"Please believe me when I say it was a lot harder to speak those words out loud than it is now to put them on paper," she wrote. "There are many reasons that I have been reluctant to share my story, but I know no that it is not my fault."

She continued, "For too long I've asked myself, 'Was I too naive? Was it my fault?' I now know the answer to those questions. No. No, it was not my fault. No, I will not and should not carry the guilt that belongs to Larry Nassar, USAG and others."

While Biles did not join other survivors in testifying at Nassar's much publicized trial, her reasoning — that she simply wasn't emotionally ready to face her abuser — was devastatingly resonant with the many survivors who don't wish to face their abusers. This decision and self boundary-setting is just as brave and powerful and choosing to face an abuser.

Biles has also been open for years about her mental health, talking about her struggles with ADHD after her medical records were leaked online in 2016. Biles, who received a medical exemption to take ritalin for her ADHD from the World Anti-Doping Agency, said in a statement that ADHD is "nothing to be ashamed of and nothing that I'm afraid to let people know."

In recent years, as more and more athletes have become leaders in the political discourse of the Trump era, and speaking up against police violence and white supremacy, Biles has frequently spoken up in defense of athletes protesting and sharing their political beliefs.

As Biles and the newly selected USA Women's Gymnastics team prepare to compete in Tokyo, the veteran Olympian and legendary athlete has nothing to prove — and plenty of records waiting for her to shatter.