Justin Chon on his heartbreaking "Blue Bayou": "I wanted to do justice to the adoptee community"

Director Justin Chon spoke with Salon about his different, authentic take on an immigrant story set in New Orleans 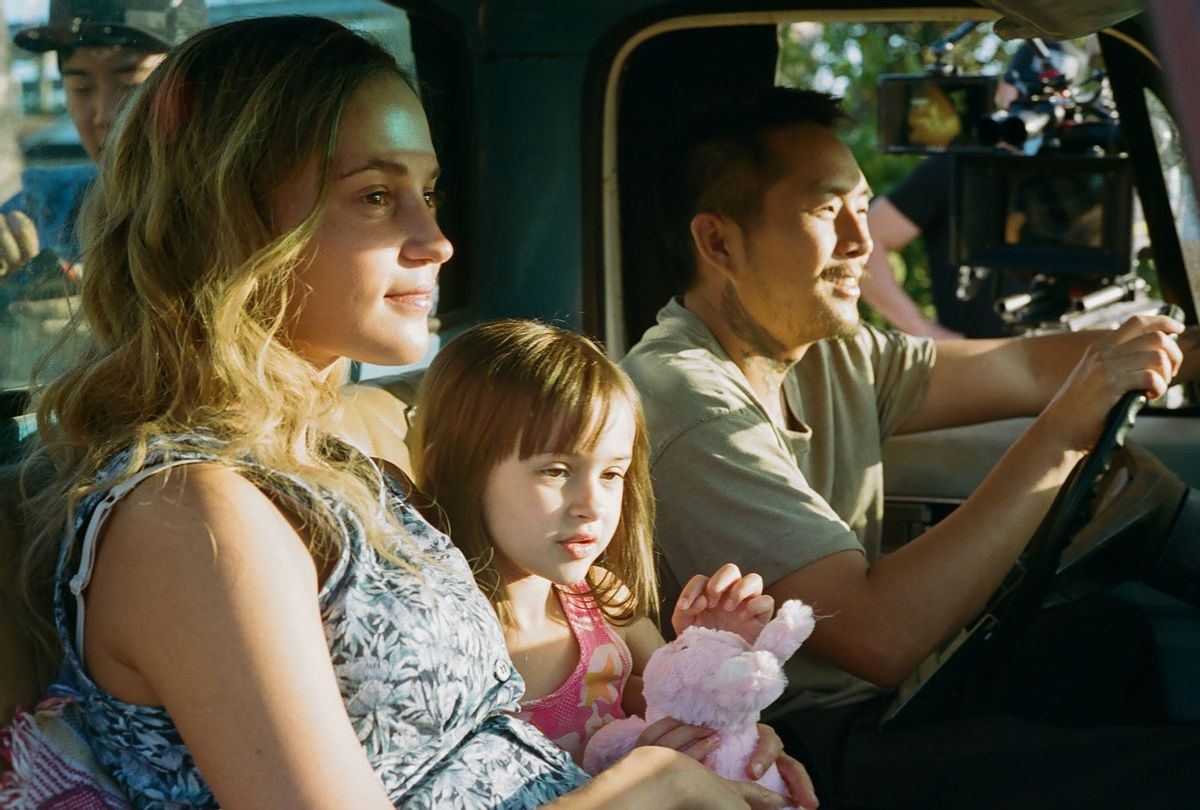 From the director of acclaimed independent films "Gook" and "Ms. Purple," "Blue Bayou," tells the story of a uniquely American family, faced with a devastating dilemma. Justin Chon directs, wrote and stars in the project, set in a vibrant and diverse Louisiana community.

Chon portrays Antonio LeBlanc, a Korean American man who was adopted and came to the U.S. at age 3, and has lived a life of struggle and tragedy. He finds purpose and joy in his family, including his pregnant wife Kathy (Alicia Vikander), and his young stepdaughter Jessie (Sydney Kowalske). But Antonio stands to lose everything when an incident with a racist local cop leads to his detainment by ICE, which threatens to deport Antonio over a complex loophole in immigration policy despite the U.S. being the only country he's ever known.

Through the many challenges and heartbreaking moments of "Blue Bayou," Antonio's loving relationship with stepdaughter Jessie, and his deep connection with a local Vietnamese woman named Parker (Linh Dan Pham), who is struggling to come to terms with her own fate, radiate comfort and warmth. Antonio's is a fundamentally human story, shining light on the real families that suffer from rigid and dehumanizing immigration policies, on the vibrant and expansive Asian communities in the South, and the diverse faces and stories of adoptees.

"I wanted to do justice to the adoptee community and their experience," Chon told Salon. His movie is dedicated to them, and with the guidance of real adoptees, it's meant to shatter myths and honor their struggles and experiences.

In an interview with Salon, Chon discussed his approach to bringing the Southern Asian experience to life, the extensive research poured into the American adoption system, and Antonio's surprising relationships with a cop and an ICE agent in the film.

"Blue Bayou" is set in Louisiana, when the South isn't usually depicted with vibrant Asian communities on screen. What was your approach to representing the Asian experience in this part of the country?

It's the reason I picked New Orleans. As we all know there's a huge Vietnamese-American enclave in New Orleans and the South in general, because we all sort of relocated in that area, Texas, Louisiana, Mississippi. I spent quite a bit of time there and have quite a few friends there, so we exist there. And one of my friends, you wouldn't believe how thick his Louisiana accent is, it's thicker than Antonio's. It's about normalizing these things so it's not a novelty. The exposure of it, that can normalize it very quickly.

The other reason is, I wanted two Asian identities in one film, and thought it would be tremendous to have a Vietnamese woman and Korean man and how they intersect in one film. Usually we're relegated to be only allowed one ethnicity per film, and I don't understand why we're not allowed to have two, and see each other interact with each other in films as well. So these are some of the considerations I had.

The "Blue Bayou" press kit reveals you felt a special connection with Antonio that compelled you to play him yourself. How was this role different from previous acting roles you've taken on? What did you learn about yourself from playing Antonio?

In writing and creating this, five different adoptees were consultants, and one particular woman was someone who's always been there for me. This movie is for them, it's dedicated to them. I hope in my performance I have given some iota of authenticity to their experience. It's truly in service to them, and I hope our performance represents even a bit of that. In terms of learning, I'm trying to encompass all of the things I've amassed through the research, and trying to feel and experience these realities firsthand while filming.

"Blue Bayou" exposes an alarming deportation loophole and highlights that many Asian immigrants and adoptees face deportation too. How does this movie tell a different story from what previous films about the immigrant experience?

When constructing a film like this, it wasn't really a consideration to try to differentiate myself, but just portray what's honest and true and authentic. That's what makes our story so special, is we all have different experiences, and those are all our individual truths. When you look at "The Farewell" or "Minari," that is Lee Isaac Chung's and Lulu Wang's truth and personal story.

Speaking of your extensive research process for the film, what did that entail? What did your collaboration with the film's adoptee consultants look like?

So we had five adoptee consultants on board, who read drafts, and I talked to them extensively throughout the process. One woman of these consultants, she's been really, really there for me. How that research translated into the film, some examples are when your own child is born as an adoptee, it's a very emotionally impactful moment. It's the first time in your life that you have someone that's blood-related to you, so for most adoptees it's incredibly emotional and we made sure to include that.

And there's the misconception that maybe adopted kids' parents didn't want them or tried to kill them, and it's a trope. So, I made sure to include the fact that Antonio's mother tried to keep him as long as she could, meaning she probably loved him, and he understood that, but it was just the circumstances. And then I consulted with immigration attorneys as well. So, those were some of my main sources of research.

The barbecue party with Parker's family is such a vibrant and joyful event. What did you want to portray with this gathering of a big Asian family?

I think it was a glimpse for Antonio into what life could be like if he gets deported, what it would feel like for him maybe. It's also the idea of the family he never had. It's putting Antonio and Kathy for that matter into a situation that's unfamiliar but warm and happy. It's all sort of a facade, because they both know tough times are coming ahead. It's all smiles, but it might just be that everyone is pretending. On the Vietnamese side, it's really the warmth, and also showing the vibrance of that community in New Orleans. Also, they've kept their culture intact, even having immigrated.

Parker and Antonio's journeys to get to the U.S. are very different, but they still relate deeply to each other. Why did you want to create this special bond between them?

Korean and Vietnamese folks, both those countries fought wars and were involved in wars with lasting impacts. And so naturally, there are bonds that just happen. There are these similarities and the many things you can relate with in one another. So, I just wanted to make sure that bond between them happened.

Antonio's relationship with his young stepdaughter Jessie is a bright, happier spot of an otherwise heavy film. How did you build that very tangible trust and comfort with your young co-star?

After we hired her, I went to Atlanta to spend a few days with her and her family. Her parents were an important part of the equation, they're the ones who will be taking care of her after we shoot intense scenes and make sure she's healthy and safe. And then, they all came down to New Orleans a few weeks early, and we rehearsed. I built a sense of play, and hopefully made her feel like she had the liberty to not feel like she's failing, the openness to be able to try anything.

Throughout the movie, Antonio has a distinct Southern accent, and so does Kathy, who also gives an iconic singing performance. What training did these performances require from you and Alicia?

I had a dialect coach for a few months, and I actually modeled the accent off of three specific people from the region. They're not famous people at all, just regular people, so that I could make sure the accent was authentic. Alicia's process involved, well, we both came early to New Orleans. I spent three months there, and really wanted to spend time there. Alicia also came early. She also worked with a dialect coach and visited real people in the community, and went over the lines in that way as well.

"Blue Bayou" seems critical of U.S. immigration policy and police brutality. The movie also makes the creative choice to portray one ICE agent and one police officer as supportive of Antonio. Could you talk about Antonio's relationships with them?

I think it's much more constructive to show the humanity of people and also the three-dimensionality of characters in films rather than relegate them to just all good or bad. There's a lot of gray area, and I have a brother-in-law who's a cop. I'm also a product of the aftermath of the Rodney King beating and verdict, and the looting during the LA riots.

So, I see the duality, and it's not quite as simple as good or bad. It's that people are human, and it's very constructive to show that it's not as simple as that. This film isn't meant as a propaganda piece but is a human film, of human relationships, and trying to bring empathy. In my films, I try to show a way where we can all co-exist in this country. So, I'm not trying to alienate anybody. I'm not trying to make anybody out to be the villain per se. Those were the heavy considerations when designing these characters.