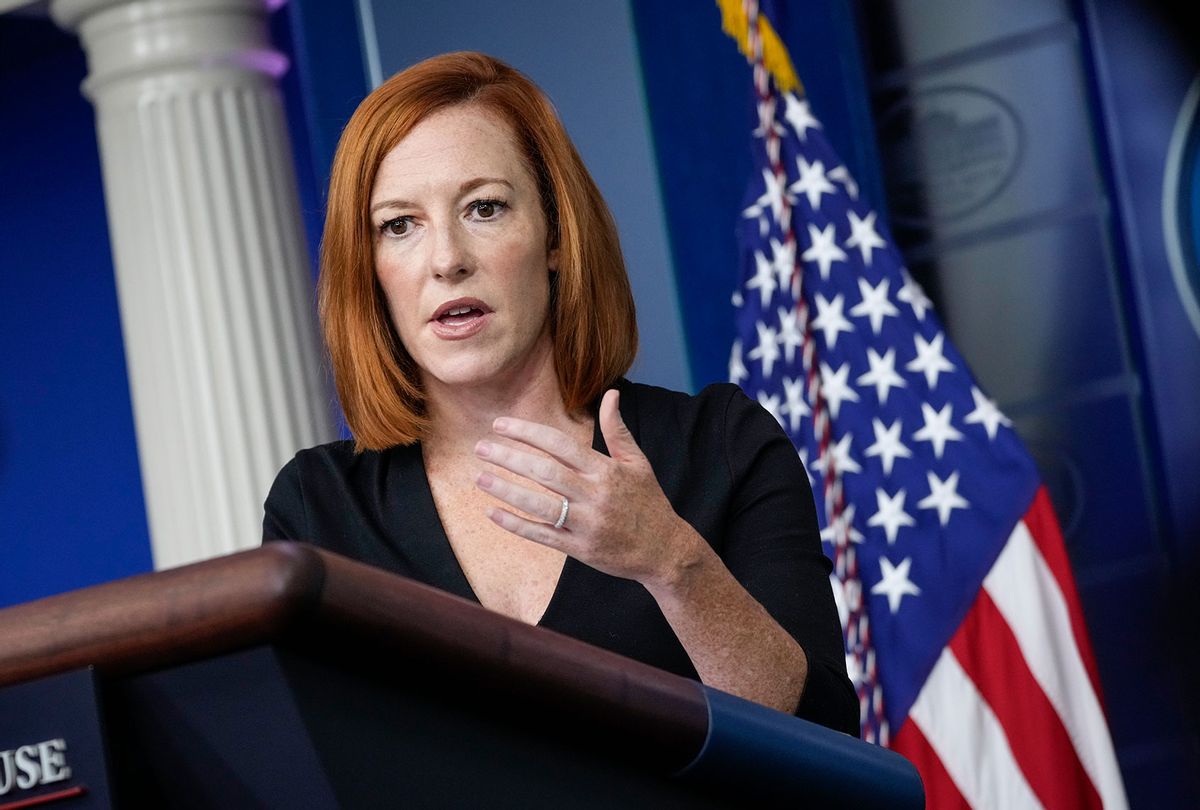 White House press secretary Jennifer Psaki has an odd problem on her hands: a longtime White House correspondent from an obscure Christian website — that publishes little or no actual reporting — is raising a fuss over no longer being allowed to enter her personal office whenever he wishes. This previously unreported West Wing drama has led the reporter in question to call for an investigation.

Matthew Anthony Harper, a former chaplain who is the self-appointed White House correspondent for a little-known media outlet called InterMountain Christian News, says his access to administration sources is being restricted. Harper says this started last week, and now claims he is the target of a "harassment" and "intimidation" campaign crafted by White House press assistants.

"A Secret Service person was giving me a hard time, saying I couldn't be there," he told Salon in an interview, referring to Psaki's office. He said the agent told him "that I didn't have clearance," adding that he was "confused about why I'm being banned from this." That incident, Harper said, occurred last Wednesday, Sept. 15.

After that incident, Harper said he now has to travel around the White House press area with an "escort," which he claims no other reporter is compelled to do. Harper does not have a "hard" (i.e., permanent) press pass, and says the White House took this measure as part of a systematic "harassment and intimidation" campaign by the Biden administration over his specific questions about "human rights." He added, "I know they're singling me out."

Harper believes there is only one way to get to the bottom of this convoluted tale: through a broad investigation into alleged White House wrongdoing. He sent what he calls a formal "complaint" by email to Psaki and press office chief of staff Amanda Finney last Thursday, calling for them to investigate their own operation.

"I've had unrestricted access without an escort to the Press Secretary's office for almost 5 years but now after my continuing and challenging Human Rights violation questions, they are giving me this problem," Harper wrote in an email with the subject line "Christian media complaint." He reiterated his claim that a Secret Service officer had given him a "hard time" and barred him from Psaki's office unless he was escorted.

"It's sometimes difficult to get appointments with any press secretary," said longtime White House correspondent Brian Karem, now a columnist for Salon. "You have to do your job and keep working till you get what you need. I cannot fathom that anyone in that press office would just categorically dismiss any reporter." As for the complaint filed by Harper, Karem said it struck him as "inappropriate."

Other established White House reporters who spoke with Salon, as well as other sources familiar with the matter, said that Harper was only recently prevented from "floating" around Psaki's office in the "upper press" area of the White House. That is not customary for reporters without a hard press pass, which Harper does not possess.

Reporters who have attended countless White House press briefings told Salon that Harper has occasionally appeared at Q&A sessions in the James S. Brady Press Briefing Room. One, however, said they had legitimately never heard of him, while several others said they had never read any of his reporting. Harper also describes himself as White House correspondent for an Israeli news service called Newsrael, which appears to be a small-scale news aggregation blog, with very few articles under his byline.

Harper has been a West Wing mainstay for years, although there is not much evidence that he is a legitimate news reporter of any description. His most memorable moment in the White House may have come in July 2012, when he asked Jay Carney, then-President Obama's press secretary, a somewhat bewildering "spiritual question."

Harper told Salon, "I was very popular with the media that day. That was an electrifying experience."

Harper describes himself as co-founder, publisher and president of the InterMountain Christian News group. Salon's research could not find evidence of actual reporting or other journalism created by Harper and InterMountain, beyond a large number of amateurish YouTube videos watched by only a handful of people.

Harper apparently first appeared in the White House's briefing room in the summer of 2011. In 2019, during Donald Trump's presidency, he created a minor media moment for his singing in the briefing room.

Last month, Harper got in a question to national security adviser Jake Sullivan.

In a video Harper posted last week from the White House, he discussed "the plight of the Uighurs in the Chinese internment camps and those in southern Mongolia and Tibet and also Taiwan that are greatly impacted by the aggression of the Chinese Communist Party," which appears to be the issue he believes has led to his supposed persecution. The video then cuts to Harper inside the briefing room, saying, "I am Dr. Anthony Harper here in the James Brady press room in the White House — so many crucial issues to talk about."

Asked whether he merits a White House press pass given his apparently minuscule audience, Harper responded that he's not at the White House to "win a popularity contest." He admitted his audience "might not be as large as CNN," but said it is "important," and that national news outlets are "promoting" and "playing" his questions lobbed at Biden officials. "One of my questions went viral in Jerusalem," he said.

"There are a lot of Jewish and Christian people in America," Harper continued. "They are really speaking against the Muslim Uighurs issue," Harper added that he has repeatedly asked the White House for comment and has not received a satisfactory answer. "Rare earth elements!" he added, just before the end of the conversation.

On Monday night, Salon learned that Harper has asked fellow members of the White House press corps to "pray" about his West Wing access problems. He said he plans to apply for a hard White House press pass in October, and hopes not to have "any problems with that."

A senior White House official originally told Salon they would comment on Harper's claims, but no response was received before this article was published.