"Our Kind of People" and "The Wonder Years": Two aspirational visions of Black life and prosperity 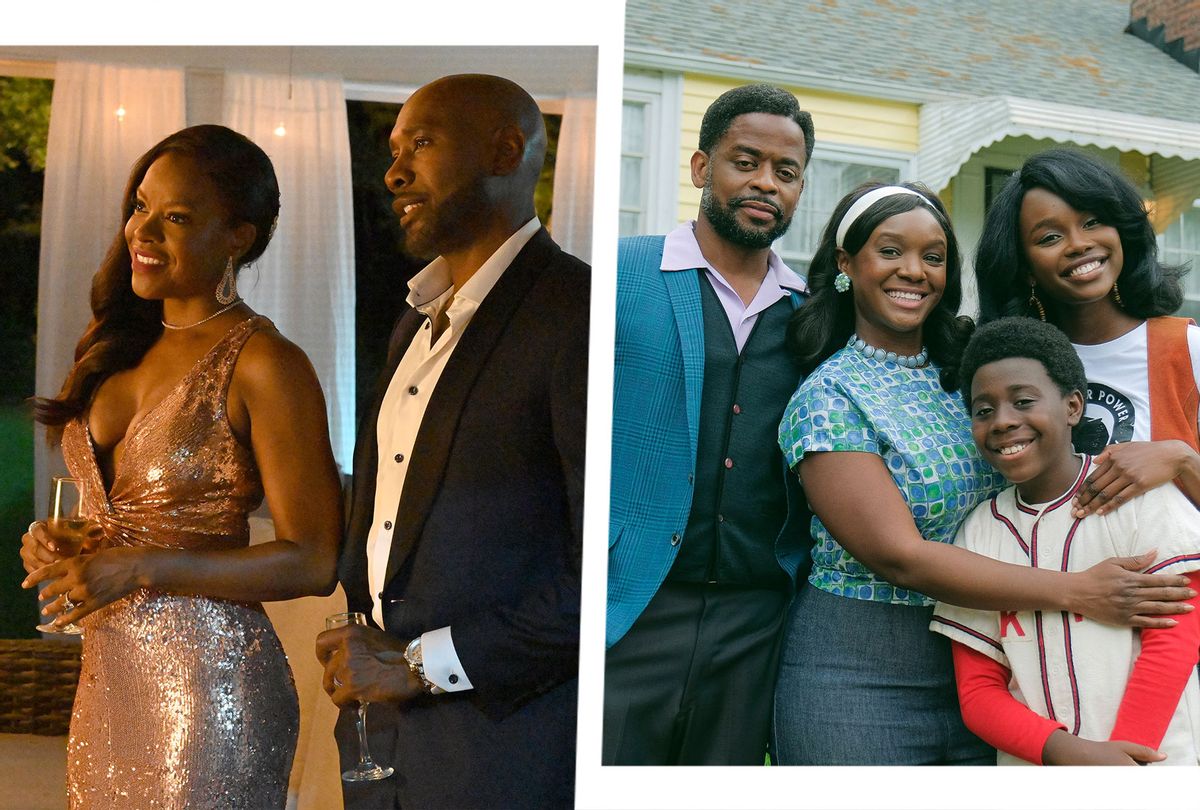 Sitting within the intersection of a Venn diagram that has "The Wonder Years" remake inside one circle and "Our Kind of People" in the other is none other than Diahann Carroll. Don't dismiss this as a stretch until you consider the late great actor's career in television, where she broke major barriers twice.

First came her starring role in "Julia," making her the first Black woman to lead a series playing a nurse and a widowed mother living in an integrated neighborhood.

Although Carroll later admitted that the show was presenting "the white Negro," her very presence in NBC's primetime lineup placed her in American homes in the same year that Martin Luther King, Jr. was assassinated and the Civil Rights Act of 1968 was signed into law.

For that reason, Carroll bore the stress and criticism she sustained for playing a whitewashed role during an era of intense animus. "Julia" may not have been an accurate portrayal of what was going on in Black America, but it – she – was on the air and in front of everybody who owned a TV set.

Saladin K. Patterson's remake of "The Wonder Years" also begins in 1968, but the common thread it shares with Carroll's half hour isn't the year but its intent. It show a view of that time that white Americans don't typically consider, and a nostalgic, rarely depicted version of Black American life in that era.

We're much more likely to see the version of Black wealth perpetuated by reality TV shows such as Bravo's "The Real Housewives of Atlanta," "The Real Housewives of Potomac" or VH1's "Basketball Wives" – all of which are direct or indirect descendants of Carroll's "Dynasty" diva Dominique Devereaux, who Carroll was proud to claim as "the first Black bitch on television."

Lee Daniels' first tribute to Carroll's primetime soap goddess came in the form of Taraji P. Henson's Cookie Lyon on "Empire." But with "Our Kind of People" the executive producer and the show's creator Karen Gist build an entire temple to the TV goddess Carroll originated.

Picture an insular section of Martha's Vineyard, populated with Carroll's daughters and sons, spiritually speaking, as opposed to Carringtons and Colbys. Even the name of this generation's ruling family's name, DuPont, is only a shade removed from Devereaux. The name sounds classy; the family's behavior is classist.

"Our Kind of People" is inspired by Lawrence Otis Graham's non-fiction bestseller "Our Kind of People: Inside America's Black Upper Class," but plays like a Danielle Steele page-turner. Yaya DaCosta is Angela Vaughn, a haircare entrepreneur who inherits her mother's styling talents, cosmetics recipes and a piece of prime real estate in the Vineyard's Oak Bluffs.

She hopes to gain entry into the elite circles of Black society to secure funding to expand her small business into a haircare empire, drawing the attention of Raymond DuPont (Morris Chestnut) and his wife Leah (Nadine Ellis). But Leah is a queen bee, groomed by her all-powerful father Teddy Franklin (Joe Morton, basically giving us a bumped-up version of Papa Pope from "Scandal") to slay all comers, especially the ones who are charismatic, attractive and new in town. The first two episodes explode massive secrets into the open and light the fuse on others, getting its hooks into soap addicts very early on.

But "Our Kind of People" tells a couple of stories about Black life that aren't generally seen in primetime, especially on broadcast. Through DaCosta's Angela it sparks a dialogue about the language and lineage of Black hair that's intricate, detailed and celebratory. And this comes at a time when the entertainment industry is being, shall we say, moved to have open conversations about the discrimination Black performers face in hair and makeup trailers.

Another is subtler but important, which is that it depicts the exclusive stratum of Black America that runs on inherited generational fortune and power. There's no shortage of rich Black characters on TV, whether scripted or somewhat real.

What we don't often see are Black families whose money isn't somehow connected to sports or the entertainment industry. Some of the "Potomac" housewives may claim lineages closer to that of the Franklins and DuPonts, but one gets the sense that they'd be turned away from membership in their secret societies for being, horror of horrors, too outwardly nouveau riche or "bougie."

Shows like this bolster the illusion that the Black elite class is substantial and equivalent in power to the white elite, perhaps contributing to the misperception often argued on the right that the racial wealth gap can't possibly be as wide as it is. But most folks with a working brain will know that it is neither this show's duty nor its purpose to dispel that foolishness. You should watch because it's a reliable weekly dose of sparkle, glam and extra-ness, along with plenty of hair inspiration, in a dreary world.

Where Daniels and Gist are whipping suds from a very modern depiction of rich folks, Patterson's "The Wonder Years" looks back at an era considered innocent by the original 1988 version's standard, which made a star out of Fred Savage (an executive producer on the remake). Boomers and Gen X loved that show because it took them back to a version of childhood that was nearly Spielbergian save for the tension between Kevin Arnold's father and his teenage sister Karen, an antiwar hippie.

Savage's Kevin experienced that era mainly through the lens of the social change that shaped popular memories of that era, but as a 12-year-old white kid living in the suburbs of Nonspecific Town, U.S.A. Kevin is mainly a witness to history.

Moments into the first episode of the reboot we see how life for Kevin's Montgomery, Alabama counterpart Dean Williams (Elisha "EJ" Williams) is intimately tied to national policies concerning race and opportunity, and more closely linked to the war in Vietnam.

But setting the story in 1968 seems designed to show how eerily similar life's problems then mirror ours today, with Black schools being defunded and closed and Black and white communities self-segregating. The script even references pandemic fears, except back then a flu strain was the source of our worries.

However, despite all that, this look back through time leans more intensely toward joy than sorrow. Don Cheadle's gentle narration as adult Dean sets and maintains that tone, although Dulé Hill's calm, fatherly presence as Dean's father Bill, a musician who works as a professor to pay the bills, solidifies the show's kindness. Really, though, this entire cast harmonizes beautifully, especially when Bill is seen romancing his wife Lillian (Saycon Sengbloh) in moments they steal for themselves.

There isn't a lot in the first episode that announces much distinctness or originality in the overall approach of this new version of "The Wonder Years," and maybe that's the point. Dean's sister Kim (Laura Kariuki) is a lot like Kevin's sister Karen, only she's more drawn to the views of Eldridge Cleaver than Martin Luther King, Jr. Still, how much of today's broadcast primetime audience knows any substantial about Eldridge Cleaver? Not a lot, I'm guessing.

In the same way that Savage's Kevin broke our hearts by mooning over Winnie, experiencing one of the darkest days in American history through Dean softens our perspective. There's a turn in the pilot when the world changes in one news headline, but his most pressing concern, besides worrying about his parents, is whether his crush will ever notice that he's alive.

As Cheadle observes in his narration, Dean and his friends grew up in a nice safe neighborhood and loving family, living the American dream in a place that's still learning to tolerate their presence, in a culture that has yet to fully embrace folks who look like them. Seeing that play out in this new "Wonder Years" has a purpose, dispensed with the fuzziness of distant memory. One suspects not everyone will be in the mood for its cozy approach. But maybe it'll fill the simple prescription Carroll tried to provide with "Julia": "I'd like a couple of million of them [white Americans] to watch," she told Ebony magazine back then, "and say, 'Hey, so that's what they do when they go home at night.'"