"Justice for J6" rally in D.C. was a flop — but violent extremism remains a serious concern

Mocking last weekend's pathetic pro-Trump rally is easy, but the anti-democratic movement behind it is no joke 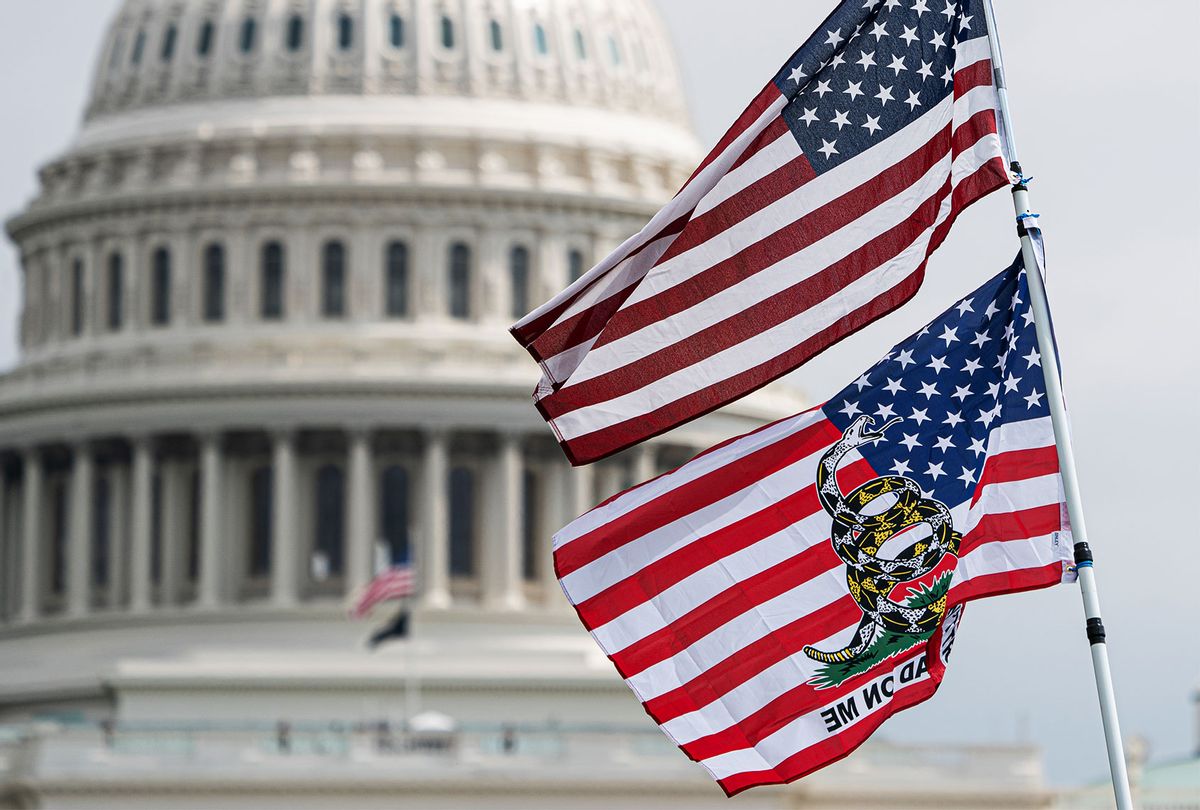 A sparse crowd gathered near the nation’s Capitol to rally for those criminally charged in the January 6 deadly pro-Trump insurrection, in Washington D.C. on Saturday Sept. 18, 2021. (Photo by Jeff Malet Photography)
--

Last Saturday, a much-anticipated Washington rally organized by a no-name TrumpWorld character was a complete bust, with only 50 attendees showing up to voice their support for Jan. 6 Capitol rioters, who were characterized at the event as "political prisoners."

Yet given that this event fell flat, does that mean that right-wing extremism in the post-Jan, 6 era is still a problem? Researchers who monitor online forums and track in-person far-right gatherings say the answer is simple: Yes.

"We condemn all violence, political violence," former Donald Trump campaign aide Matt Braynard told rally-goers on Saturday — from a stage that was barely a foot off the ground while flanked by a security guard with a singular AirPod. "This is about justice and disparate treatment and equal treatment under the law," he continued, attempting to create a frame of support around at least a few of the people arrested for their activities in or around the U.S. Capitol on Jan. 6.

Even though this particular rally drew what could generously be considered a lackluster crowd, extremism experts who monitor right-wing ecosystems online and in the real world say the sparse turnout doesn't represent the true scale of the threat posed by right-wing extremism.

"A small showing at Saturday's event shouldn't be mistaken for a reflection of the far right generally," Holt said. "A lot of the dynamics we saw in play around Jan. 6 have since trickled into state and local politics, where there is often much less scrutiny and fewer resources to effectively address it."

The fact that last Saturday's gathering was a "bust" was "to be expected," Holt said, reflecting "the lack of apparent organizing that we saw happening online before the event."

"This rally ended up getting Matt Braynard a ton of press, raising his profile from a no-name organizer," Holt added. "What he does with this newfound visibility remains to be seen."

Oren Segal, vice president at the Center on Extremism at the Anti-Defamation League (ADL), largely concurred with Holt's analysis, telling Salon that it's important to focus on right-wing extremists in local communities around the nation.

"Whether it's harassing school boards, election officials or health care workers. we need to understand is that the front line against extremist activity and action is probably more local than it's been in a long time," Segal said.

"For years, people thought of an international threat, and more recently, we're thinking about these online spaces that can be very daunting," he continued. "Well, when you see people harassing individuals in your community, when extremists are talking about the need to double down locally, they know, or hope, that eventually will have a greater impact nationally than going to the nation's capital. I think maybe all eyes are on D.C. when all eyes ought to be in local communities to really understand the current extremist landscape."

Two pro-Trump attendees amid the dismal Saturday gathering showed up with flags bearing logos of the "Three Percenter" far-right militia. Yet when asked by Salon about the insignias, the duo claimed to be unaware of what the flags represent.

In a Tuesday afternoon press release, Braynard's Look Ahead America organization announced that it planned to hold another "Justice for J6" rally next weekend at the state capitol in Albany, New York. Why the seat of New York state's government is relevant to this cause — which involves alleged federal crimes committed on federal property — was not made clear.