Even by Florida standards, the saga of Rep. Matt Gaetz is getting weird 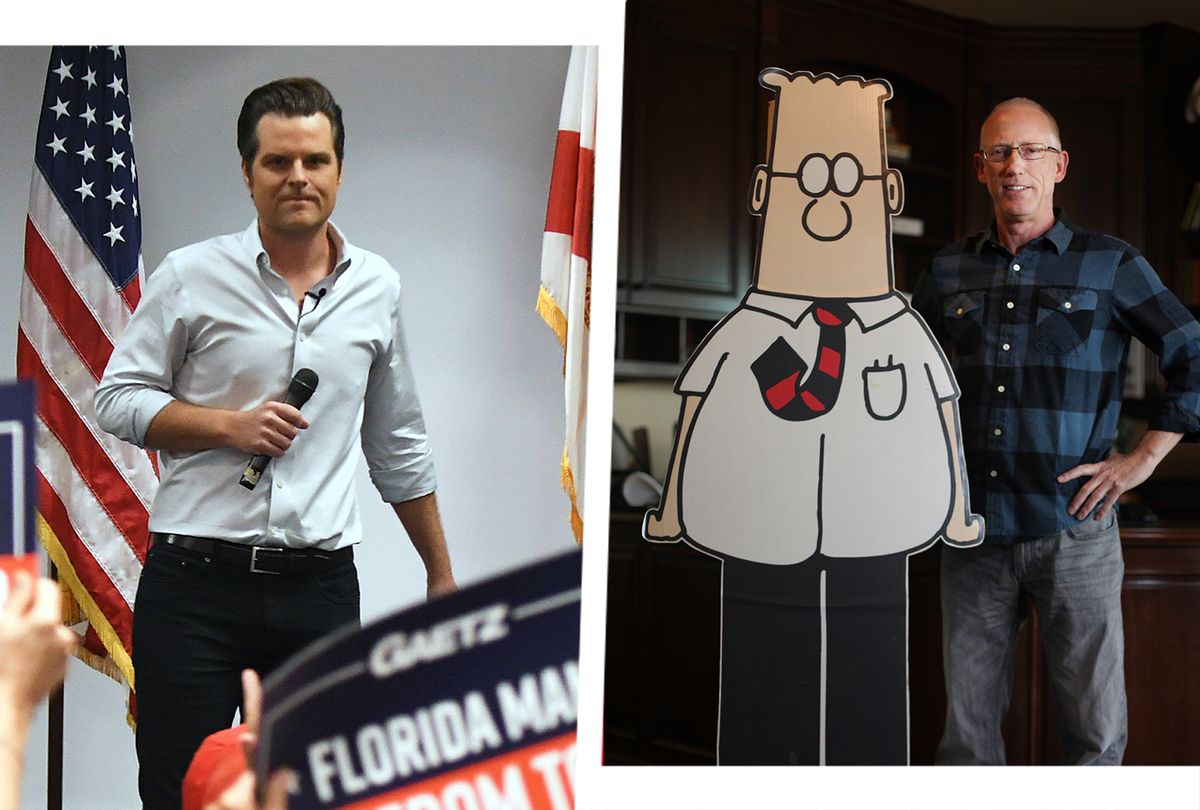 The legal saga of Rep. Matt Gaetz, R-Fla., just keeps getting stranger — even by Florida standards.

Just three days before news broke publicly of a federal probe into the Congressman's alleged child sex trafficking, Scott Adams — the Trump acolyte and creator of the popular newspaper cartoon "Dilbert" — was apparently discussing "inside knowledge" of the investigation with an employee of the Israeli consulate in New York City, according to a new report from POLITICO.

Jake Novak, who the publication identifies as the director of broadcast media at the Consulate General of Israel, and Adams were reportedly friendly on social media and spoke sometimes. But during this conversation, Novak apparently indicated that he was involved in a plot to convince Gaetz' father, a longtime Florida politico himself, to give $25 million as part of a plan to free a U.S. hostage in Iran.

"Scoop I can't report: Rep. Gaetz is the subject of a sex with minor…. I trust the source. Charges/accusations apparently 'very credible'," Novak wrote to Adams, according to text messages first reported by the American Conservative. After the news became public several days later, Novak followed up with another message: "told ya."

There was no indication Novak believed the scheme to be a crime, POLITICO reported — though another man, the Florida real estate developer Stephen Alford, was indicted late last month for attempting to defraud Gaetz' father. Court documents allege that Alford claimed he could broker a presidential pardon for Gaetz in exchange for freeing the hostage, named Bob Levinson, who most intelligence officials believe to be dead.

The Israeli consulate told the outlet that neither it nor the state of Israel were involved in the plot.

"Jake Novak is a staffer at the Israeli Consulate in New York, and is not serving in any official diplomatic capacity. His correspondence mentioned in this story was not in any way, shape or form a part of his role at the consulate," Itay Milner, a spokesperson for the consulate, told POLITICO. "After this matter was brought to our attention, it was made clear to Mr. Novak that this is not acceptable by the consulate general, he must never be involved in such matters again and that he must cut immediately all his connections to the issue."

The salacious details of the case have enraptured Washington, D.C. and beyond — with Law and Order even featuring an episode Thursday night with a Congressman storyline eerily similar to the Gaetz saga.

Adams, a cartoonist best known for creating the office comedy strip Dilbert, likely entered the story because of his connections to Trumpworld.

"People with connections to Israel had a high interest in me during the Trump days. Presumably to influence me," Adams told POLITICO. "Jake and I shared an interest in the mechanics of persuasion, and in interesting business/political stories in general. Most often the stuff with a persuasion or Israel angle. That was our initial connection … people often tell me their scoops before they hit the news just to build credibility. Might have been that."

After the text messages between the two parties became public, Adams also added that he did not know how reporters had gotten the information.

"We have not communicated since," Adams told POLITICO. "I'm just as confused as you about why Jake had any involvement and why he thought he needed to tell me."