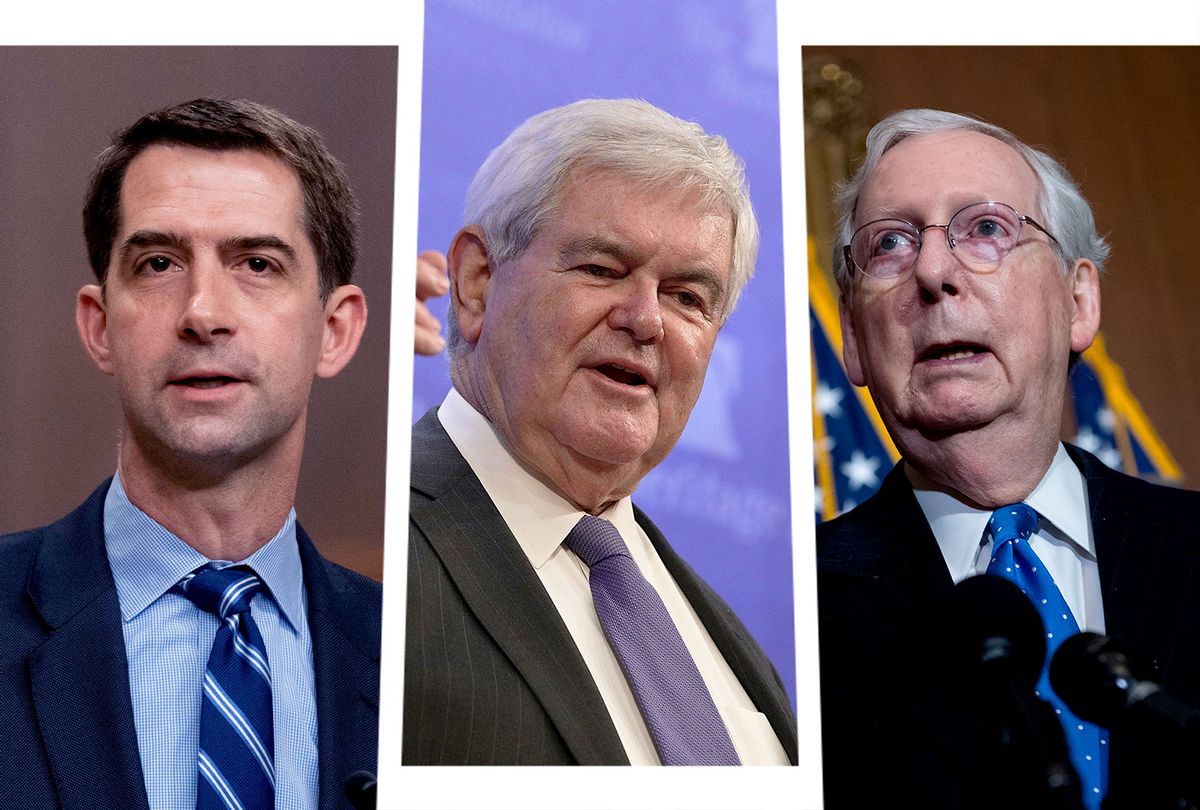 There are many inane rituals that take place in the U.S. Capitol, but none that rival the tiresome conventions around the annual funding of the government known as "raising of the debt ceiling."

It's like Groundhog Day, with Republicans balking at participating and everyone else running around in circles trying to cajole them into getting onboard so the United States doesn't crash the world economy. It is no way to run a country. This year the issues are more acute than usual because the Democratic majority is concurrently trying to pass two very large programs — the bipartisan physical infrastructure bill and the reconciliation bill that contains the vital human infrastructure program that Joe Biden and the party ran on in 2020. It's all coming to a head at the same time.

The progressives in both chambers of Congress are standing firm in their demand that Congress pass the agenda that they and Joe Biden both ran on. But sadly, there is a small handful of so-called moderate Democratic House members who have decided to be divas and are threatening to blow up Biden's program unless it is stripped of much of the funding that makes the rest of it possible, while certain so-called moderate Democratic senators are strutting around insisting the price tag is too high without bothering to name any specific cuts. D.C. is full of demands to meet meaningless and arbitrary deadlines, constantly moving targets and endless tedious posturing these days.

This dynamic is anything but unprecedented (there are always a few who just have to gum up the works) but with margins as narrow as they are in this polarized body, and with the presidency on the line, you would think these moderates could stay unified with the majority just this once. If they succeed in destroying the president's signature initiative, they are effectively Republicans. I hope they look good in red MAGA hats.

It's nice that a handful of Republicans in the Senate managed to vote for the physical infrastructure bill (although the GOP House leadership is now whipping against it) but no one expected that the Republicans would vote for the big infrastructure bill that directly benefits actual humans and addresses climate change. They have no interest in such things. The Democrats are happy to put that bill through the reconciliation process which only requires 50 votes, although corralling all 50 is predictably difficult for the reasons outlined above. But funding the government and raising the debt ceiling should basically be pro-forma votes and the fact that it is pulling teeth every single time is one of the most pathetic annual displays of dysfunction in our government.

It didn't use to be that way.

Government shutdowns were never even thought of until the Congressional Budget Act of 1974. It's happened 21 times since then.

Haggling through the budget process didn't necessitate actually furloughing workers — until the Reagan Justice Department issued a set of opinions saying that if there is a period when Congress doesn't allocate funds for some reason, the government must partially or fully shutdown until it comes to an agreement. The longest shutdown came in 2019 when President Trump had a tantrum over his border wall which the Democratic majority refused to fund.

It might happen again this year and it would be particularly destructive. We are still in the middle of a major crisis, a deadly pandemic that is being exacerbated by so many Republicans refusing to get themselves vaccinated. Meanwhile, the need to lift the debt ceiling looms.

The law states that the Treasury Department must come to Congress and get permission to raise the debt ceiling and, according to Treasury Secretary Janet Yellen, that time is upon us. If Congress fails to lift it by mid-October, the United States will default on its debt and all hell will break loose.

So it's important to look at how this came to pass. After all, the idea that the U.S. should pay its bills is a no-brainer. And throughout most of our history, that's exactly how it was treated. In fact, until 1917 it was just done automatically when Congress instituted the rule because federal agencies were spending willy nilly without congressional approval. And mostly it continued to be done automatically without much fanfare. At one point the House instituted what they called the Gephardt Rule (after former Missouri congressman Dick Gephardt), which simply "deems" the debt ceiling lifted when a budget resolution is passed and it is an excellent idea.

However, the modern GOP's original bad seed, former House Speaker Newt Gingrich, saw the opportunity to turn the debt ceiling into another Republican weapon and it's now pulled out whenever they want to yank the Democrats' chains. In 1995, in a speech before the Public Securities Association, Ginrich raised the specter of default as if it was a serious option in order to force a budget on radical GOP terms. The demands were not met, but the brinkmanship became an annual GOP custom that's still playing out today.

This time there's a new twist, however. Senate Majority Leader Mitch McConnell isn't even negotiating. He says that Republicans will not vote to raise the debt ceiling because it isn't their responsibility. And that's that. Sure, several Democrats just voted to raise it during Trump's term but that's their thing. Republicans are now all simply refusing to participate. Except, of course, they are. They are filibustering the budget resolution and the debt ceiling hike making it necessary to get 60 votes, which don't appear to exist.

McConnell and company insist that Democrats can just raise the debt ceiling in reconciliation which only requires 50 votes. Of course, that also means opening up another round of "vote-o-rama" and that takes time. They also seem to think that somehow voting for the debt ceiling in a party-line reconciliation bill will really hurt the Democrats in 2022. Seems a bit far-fetched to me. Republicans are already going to attack Democrats mercilessly as tax-and-spend liberals no matter what, so it's hard to see why this would make much difference.

Obviously, McConnell also believes that this gumming up of the works may prevent them from passing their two big infrastructure bills although it looks like Democrats may do that dirty work for him. But you have to wonder why Republicans keep going down these roads. Every government shutdown since Gingrich's time has blown back on the GOP because everyone knows that they are the ones who are obstructing the normal process. It's their brand!

Ultimately, they are just obstructing for the sake of obstructing. Will Senators Kyrsten Sinema of Arizona and Joe Manchin of West Virginia ever wake up and realize that their "principled" stand protecting the filibuster has simply made them pawns in Mitch McConnell's obnoxious trolling strategy? I don't know, but if they ever plan to do it, now would be an excellent time.