Rudy Giuliani lashes out at Fox News, calls his ban from network "outrageous" 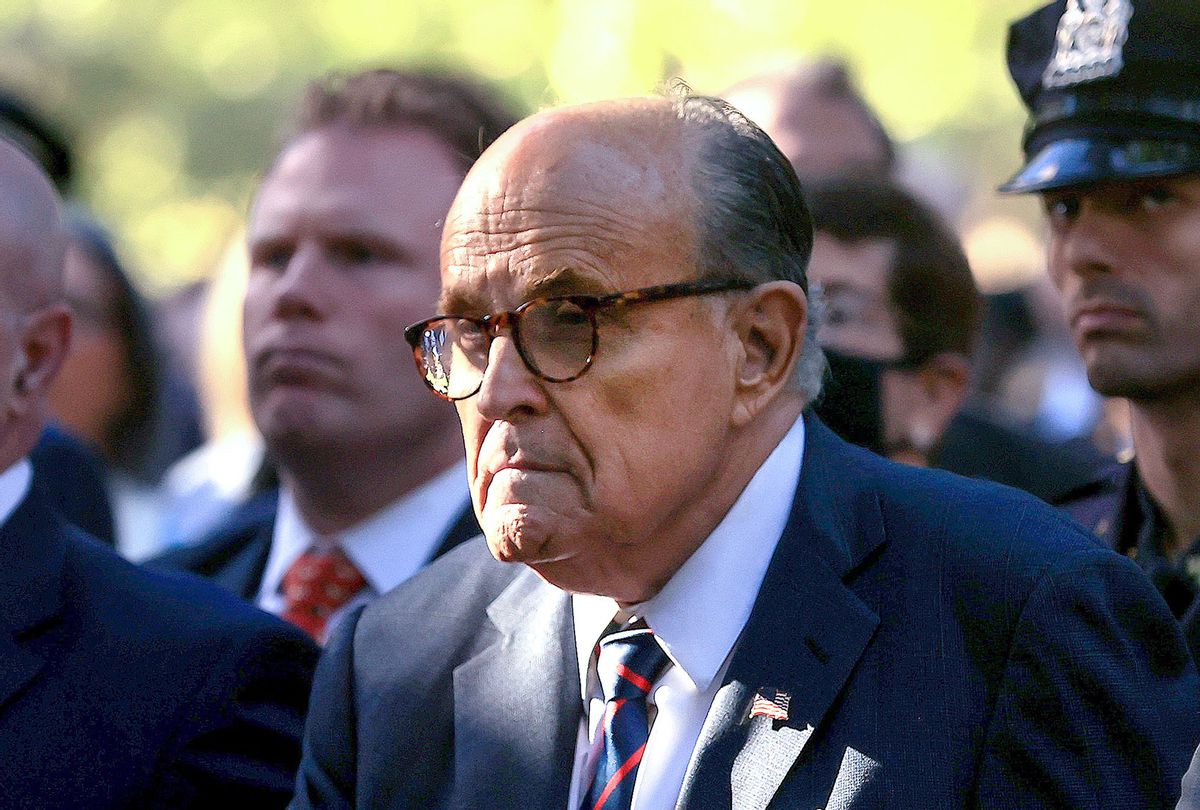 Rudy Giuliani and his son have reportedly been banned from appearing on Fox News amid Dominion's $1.6 billion lawsuit against the channel for backing Trump's baseless election fraud conspiracy.

The development, first reported by Politico, allegedly came just the night before the former New York mayor was slated to appear on "Fox & Friends" for the show's coverage of the 20th anniversary of 9/11. Host Pete Hogseth reportedly called Giuliani personally to deliver the news, leaving the former prosecutor feeling "really hurt" because he had "done a big favor" for Fox News founder Rupert Murdoch back in the 1990s.

"[Giuliani] was instrumental in getting Fox on Time Warner so it could be watched in New York City," a source familiar with the matter told Politico.

"I could not have been more disappointed with the Fox coverage on the 20th anniversary of September 11," Bernard Kerik, the disgraced New York City police commissioner under Giuliani, told Politico. "Then they chose to intentionally ignore Mayor Giuliani who was, and who according to their own coverage for the last two decades was America's hero on the day and in the aftermath of the attack. Regardless of reasoning, I think this was another demonstration of Fox's cowering to the far left."

Politico also reported that the three-month ban, which also applies to Giuliani's son, Andrew – a political advisor currently vying to be New York's next governor – apparently came "from the top"

Asked about Giuliani's apparent ban by Salon, a Fox News spokesperson denied that Rudy Giuliani was scheduled to appear on the segment's September 11 programming. A spokesperson also denied any ban on Andrew Giuliani, citing multiple appearances on the network since he announced his run for governor. They did not comment on whether Rudy Giuliani was barred from the network.

During a Friday taping of Steve Bannon's show, Giuliani called the ban "outrageous" while taking a dig at the network.

"They do a pretty good separation between Hunter Biden and Joe Biden."

The alleged ban comes on the heels of a long-brewing legal feud between Fox News, Giuliani, and Dominion Voting Systems. Back in March, Dominion filed a sweeping $1.6 billion lawsuit against Fox News, Guliani, and host of Donald Trump affiliates for promulgating the former president's baseless allegations of widespread fraud in the 2020 election. The software giant argued that the channel "recklessly disregarded the truth" and "endorsed, repeated, and broadcast[ed] a series of verifiably false yet devastating lies about Dominion."

Also in the mix is Smartmatic's $2.6 billion lawsuit against Fox News, which alleges complaints of a similar nature, citing that the channel granted Giuliani a platform to spout unsubstantiated claims about election fraud. Fox has since filed a motion to dismiss Dominion's lawsuit and is also urging a court to shoot down Smartmatic's.

Giuliani, for his part, has backtracked somewhat on his claims of election fraud, saying back in August that his claims were "substantially true," while admitting that he didn't understand how Dominion's voting software works. Earlier that month, a 2018 deposition transcript was unveiled in which Giuliani effectively admits to the FBI that he had used Fox News to promote "fake news" about Hillary Clinton's campaign during the 2016 election.

Giuliani isn't the only one from Trump's orbit to have fallen out of the network's good graces. According to Politico, a number of senior Trump aides have struggled to book appearances on Fox News. "They're not doing us any favors," one aide told Politico.

The ban is just the latest in a series of reputational blows for Giuliani over the past several months. Back in August, it was reported that the former mayor was "close to broke" as a result of his legal entanglements with Dominion, Smartmatic, and federal investigators probing his alleged work as an unregistered lobbyist for Ukraine. Two months earlier, Giuliani had his law license suspended by the state of New York for his "demonstrably false and misleading" claims about the 2020 election.

With additional reporting by Zachary Petrizzo.