It's the best way to win the leftovers game 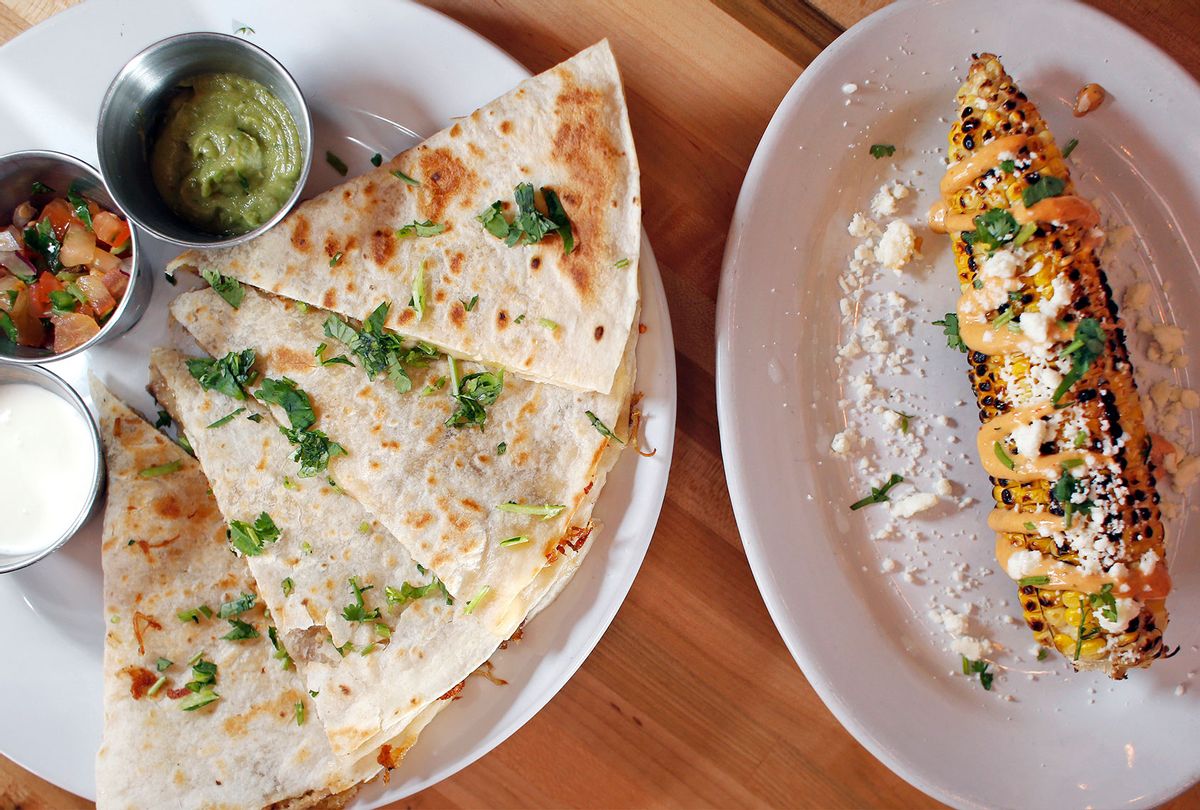 Welcome to Kids & the Kitchen, our new landing pad for parents who love to cook. Head this way for kid-friendly recipes, helpful tips, and heartwarming stories galore — all from real-life parents and their little ones.

Ask any parent, and they'll tell you: Kids are born scavengers.

If they're not coming in from the backyard clutching handfuls of twisty twigs and acorns, they're finding buttons and baubles under the couch to add to their "collection." Lately, I've started putting this "skill" to work with my two-and-a-half-year-old. "Time to go scavenging!" I'll say, holding open the door of the fridge. Into her tiny mitts go the most coveted ingredients: leftover rotisserie chicken, spinach, tomatoes, chickpeas, or even artichoke hearts.

Ah, yes, the good 'ol quesadilla. We know, we know: You've made a quesadilla before. But we'd like to remind you that it's just as fabulous for using up those two tiny bites of leftovers as is a frittata or quiche. (If you're a parent of a young child, you're probably pretty much drowning in bits and bobs of leftovers.)

Infinitely versatile and ready to welcome nearly any leftover combos in its warm, floury embrace, the quesadilla is a way to empty the crisper and concoct a lightning-quick meal. Plus, it's very budget-friendly, and kids love to make their own. Here are the key moves.

Corn tortillas might be your taco go-tos, but for quesadillas, you generally want flour. More pliable and accommodating to a volume of fillings, they leave plenty of room for interpretation. The "burrito-sized" (9"-to-10") tortilla will produce a half-moon quesadilla ideal for older kids and adults. Cut it in half, and you've got two meals for a tot, generally speaking.

Quesadillas' charm lies in that epic, stretch-it-to-the-ceiling cheese pull, which requires just the right melty options. Queso Oaxaca is the Mexican classic for ultra-gooey perfection, but Monterey Jack, Cheddar and mozz are high-moisture, easy-melt staples of the Americanized quesadilla canon for a reason. Mixing it up with a blend — which can include Brie, fontina, feta or goat cheese, depending on your kid's palate — can also work nicely.

No matter your queso, grate your own cheese if you can! We know you're busy making sure the kid doesn't jump off the couch, and pre-grated is OK in a pinch, but hand-shredded cheese from a block cooks faster and typically lacks the preservatives of the bagged stuff.

The fillings ("Can I quesadilla it?")

This part is as simple as pondering which flavors would play nicely together. You don't have to stick to traditional elements. Think: Buffalo chicken with pepper jack and blue cheese dip on the side. Or bacon, lettuce, tomato and gouda. I've done a Mediterranean quesadilla — feta, leftover gyro-style lamb and eggplant — to applause from every family member. Half a hamburger can be crumbled into melty cheddar with caramelized onions and mushrooms. Boursin loves onions, too, as well as roast garlic and avocado. And we'd be lying if we said we'd never quesadilla-ed lox, cream cheese, onions and capers. Don't exceed three ingredients, and don't overfill. Half a cup, total, on half an open tortilla will generally satiate even the most extreme preteen cravings.

The tools and technique

For the crispiest-on-the-outside, gooiest-on-the-inside results, I'm smitten with an electric flat top griddle. A deep dive on quesadilla griddling (and deep-frying!) is here. Don't have a griddle? I like nonstick, but well-seasoned cast iron can work with grease.

It might seem obvious, but the dryer the fillings, the less mess. (For wetter ingredients such as broccoli, blot off any extra moisture with a paper towel or clean kitchen cloth.)

Some people swear by butter, but I love a small dab of a neutral oil like canola for a crunchy exterior. Add your tortilla to the greased pan for 30 seconds per side, over medium heat, before adding your cheese. (Leave a small border around the edges.) Fold the tortilla to form a half-moon, then let cook until the cheese bubbles and the tortilla crisps. Then flip and cook on the other side. If you want to speed the process along, cover your griddle or pan with a lid. (If you're a cast-iron diehard, you might throw a heavy Staub Cocotte lid on top to smash it down, for extra texture, but you do risk sticking.)

If the kid is big enough to help, let her: It may ensure she takes a bite of the finished meal, too! And we'll admit we sometimes make a "safety quesadilla" — yes, just cheese — and put a slice on the plate alongside all the other exciting options. It's in line with popular theories of raising kids who listen to their bodies.

Think outside the salsa caddy triad! Salsa, sour cream, and guacamole are classics, but you don't need to stick to them. Think: Chili crisp; piri-piri; BBQ sauce; ranch; Green Goddess. (Really!) And be sure to ask which one is your kid's fave, to ensure she'll eagerly anticipate it on Fridge Scavenging day.