Sinema is charging up to $5,800 to attend a 45-minute fundraiser with groups that mostly donate to Republicans 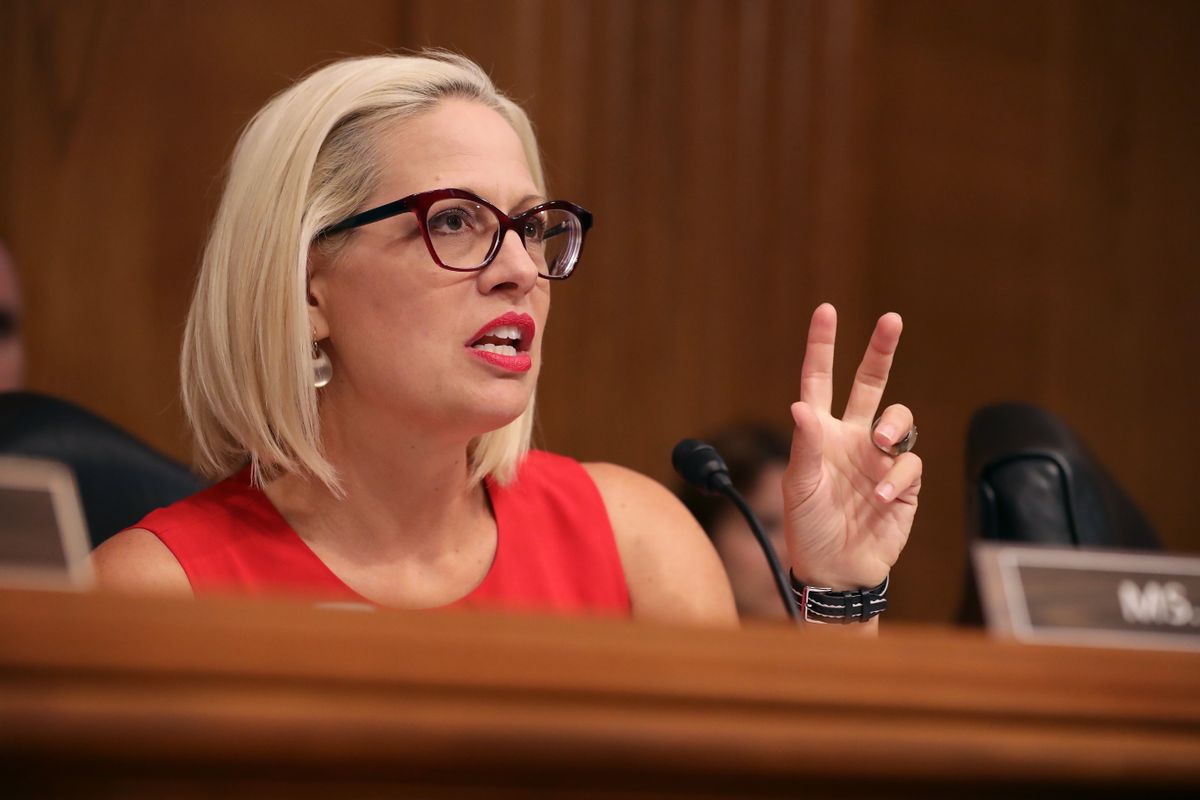 Sen. Kyrsten Sinema, D-Ariz., is scheduled to hold a fundraiser with business lobbying groups that eager to defeat President Joe Biden's $3.5 trillion spending bill, according to a leaked invitation published by The New York Times.

Sinema, a corporate-friendly first-termer who has rejected the bill's price tag and reportedly opposes drug price reform and tax increases on the wealthy and corporations that would help pay for the Biden package, will meet with business groups that have criticized the proposed tax increases. In an invitation emblazoned with Sinema's campaign logo, the groups invited members to an "undisclosed location" for 45 minutes on Tuesday to write checks between $1,000 and $5,800 to Sinema's campaign.

The groups are amid countless business associations that have launched a massive lobbying blitz in hopes of defanging the Democratic spending package, or perhaps defeating it altogether.

One such group, the S-Corp PAC, which represents small businesses and overwhelmingly donates to Republicans, warned that the House draft of the package would "kneecap private companies" that pay individual taxes rather than corporate taxes.

Another lobbying group, the National Association of Wholesaler-Distributors, which almost exclusively funds Republicans, said earlier this month that passing the "largest tax increase in U.S. history on the backs of America's job creators as they recover from a global pandemic is the last thing Washington should be doing." (Biden's proposed tax increase is not the largest in history).

The National Grocers Association, another participant that predominantly donates to Republicans, complained about a "laundry list of tax hikes" that could make it into the bill earlier this month, warning that even if "a handful of moderates balk at many of these hikes (Senators Sinema and Manchin have already publicly opposed the $3.5 number), grocers and other industries are still going to see a jump in their tax bill."

Sinema spokesman John LaBombard did not comment on the fundraiser but told the Times that Sinema "voted yes in August on the budget resolution" to advance the spending framework and is "working directly, in good faith, on the legislation with her colleagues and the administration."

But this latest report sparked backlash from progressives, who have already criticized Sinema for her opposition to Democrats' plans to lower prescription drug costs and raise corporate taxes after she received more than $750,000 in donations from pharmaceutical and medical firms and than $900,000 from industry groups and corporations that hope to torpedo the bill.

"While she gives corporate influences great access, how much time in her schedule has Sen. Sinema reserved for open, public meetings with her constituents?" questioned Faiz Shakir, an adviser to Senate Budget Chairman Bernie Sanders, I-Vt.

Sinema's reluctance to back the Democrats' spending agenda, including key measures that some lawmakers have spent decades to advance, has sparked backlash back home as well. The Arizona Democratic Party on Saturday overwhelmingly passed a resolution threatening a vote of no confidence in Sinema if she "continues to delay, disrupt, or votes to gut" the spending plan, which would, among other things, expand Medicare and Medicaid, extend the enhanced child tax credit, fund free child care and family care, provide free community college and paid family leave, and fund new programs meant to address climate change.

Democratic organizer Kai Newkirk told The Daily Beast that activists who helped elect Sinema in 2018 "have had enough of her betraying the voters who put her in office."

"It's time for her to show the bare minimum of accountability and stop obstructing the agenda that Democrats, including her, campaigned on and were elected to deliver," he said. "Sinema is setting her political future on fire. If she doesn't change course drastically and soon, it will be too late."