Instead of just getting vaccinated, anti-vaxxers are drinking iodine antiseptic 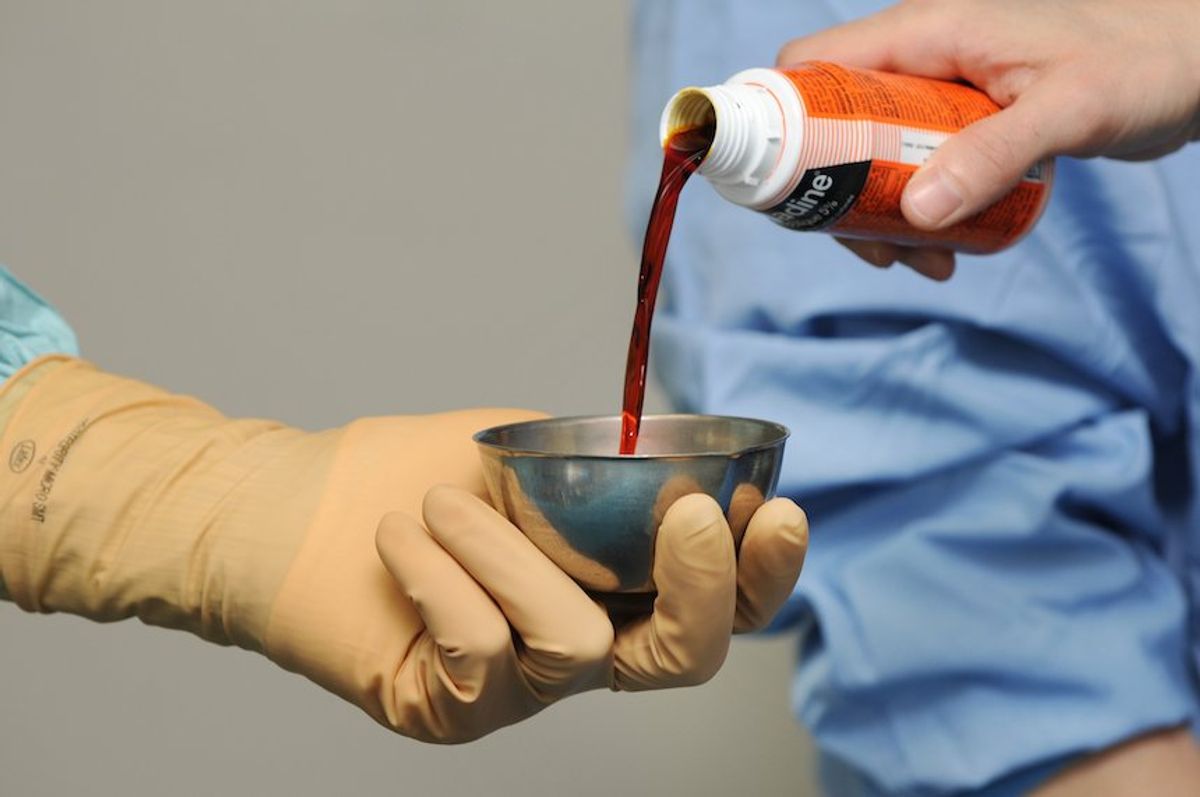 Another ineffective treatment for COVID-19 is being promoted in anti-vaccine and science-skeptical circles.

First there was hydroxychloroquine, then ivermectin; now, according to multiple reports, some Americans are gargling and/or ingesting the iodine-based liquid Betadine to prevent COVID-19 — instead of getting vaccinated.

Betadine is the brand name for povidone-iodine, an amber-colored liquid typically sold as a 10% solution as an antiseptic for cleaning wounds and skin. A 0.5% solution is sold as a gargle for sore throats, but the manufacturer cautions people not to swallow it. Recently, the manufacturer warned consumers not to consume Betadine to treat COVID-19, or rely on it as a form of treatment.

Depending on which type of Betadine one ingests, side effects can range from stomach pain, nausea, vomiting, diarrhea, fever, extreme thirst, being unable to urinate to diarrhea, vomiting, and burning a person's gastrointestinal tract.

As mentioned, there isn't sound scientific evidence that Betadine would treat or prevent COVID-19. So how did this trend start?

While a precise timeline is hard to reconstruct, several sources on social media promoted the use of Betadine to treat COVID-19 starting at the end of last year. Specifically, one video of a purported doctor went viral in April 2021; in it, the doctor states that Betadine helps treat and prevent COVID-19.

Those who are supporting claims that Betadine could be an effective way to treat or prevent COVID-19 often point to a couple of studies suggesting that in in vitro experiments, different antiseptics decrease the viral load of COVID-19. Yet as experts previously interviewed by Salon attest, in vitro studies are often meaningless.

Studies based on in vitro test-tube or cell culture work "raises eyebrows" to a virologist, Dr. Benhur Lee, a Professor of Microbiology at Icahn School of Medicine at Mount Sinai, told Salon last month in a discussion of an in vitro ivermectin study. As Lee explained, "in vitro" refers to studies that take place in test tubes, petri dishes, or outside of human patients. Lee notes that what happens in vitro might not necessarily translate to the human body.

"I can increase the concentration of sodium chloride (table salt) by 50% to my tissue culture cells and show inhibition of most viruses," Lee said. "But I don't go asking people to eat as much salty food as possible to combat virus infections, much less SARS-CoV-2."

Lee characterized the belief that in vitro studies will translate to an effective treatment "magical thinking."

Like many myths about COVID-19 drugs, the idea that Betadine is a viable treatment grew from shaky scientific evidence and was perpetuated by seemingly authoritative figures on social media.

For example, a 2020 study found Listerine, Iso-Betadine, and Dequonal mouthwashes might decrease the viral load of saliva, thus lowering the transmission of SARS-CoV-2. A more recent study found that Listerine and Chlorhexidine disrupted the Covid virus under in vitro conditions. But no real world evidence or trials in humans suggest that gargling with mouthwash or Betadine could have an effect on COVID-19.

Even if these did kill novel coronaviruses in one's mouth, that wouldn't be enough to halt the virus.

"It's not like your cells get infected and then they secrete a bunch of virus and they're done," virologist Angela Rasmussen told the New York Times. "Infected cells are constantly making more virus. It's a timing issue."

The manufacturer of Listerine is also warning against consumers using the mouthwash as a treatment for COVID-19.

"Although there are recent lab-based reports (in vitro studies) of some LISTERINE® Mouthwashes having activity against enveloped viruses, including coronavirus, the available data is insufficient, and no evidence-based clinical conclusions can be drawn with regards to the anti-viral efficacy of LISTERINE® Antiseptic mouthwash at this time," the company states. "More research is needed to understand whether the use of mouthwashes can impact viral transmission, exposure, viral entry, viral load and ultimately affect meaningful clinical outcomes."

Not only are the manufacturers strongly warning against this — but many doctors and public health experts are, too.

"Potassium iodine, for example, is a form that, if enough is ingested, it can cause some really severe gastrointestinal issues," Scott Schaeffer, managing director of the Oklahoma Center for Poison and Drug Information, told the Oklahoman. "Betadine and those type of products are very low in concentration. If a person were to get a pure form of iodine, like the potassium iodine, it could potentially cause pretty significant burns in the mouth, the throat, the esophagus. The last thing you want to do is burn a hole in the stomach or the esophagus."

Luckily Schaeffer told the newspaper that they haven't seen an uptick in calls to internal or external iodine-related calls.

"Four of them were the typical type of thing where a child gets into either an iodine supplement or a Betadine bottle, picks it up and drinks from it," he said. "The other was a person who was gargling with Betadine, but for a sore throat, and didn't mention COVID, so I'm inclined to think that it was not with the intent of treating or preventing COVID."

According to the local news channel WJXT in Jacksonville, Florida, the state's poison control center has only received one call in the last month of a person misusing betadine to treat COVID-19.