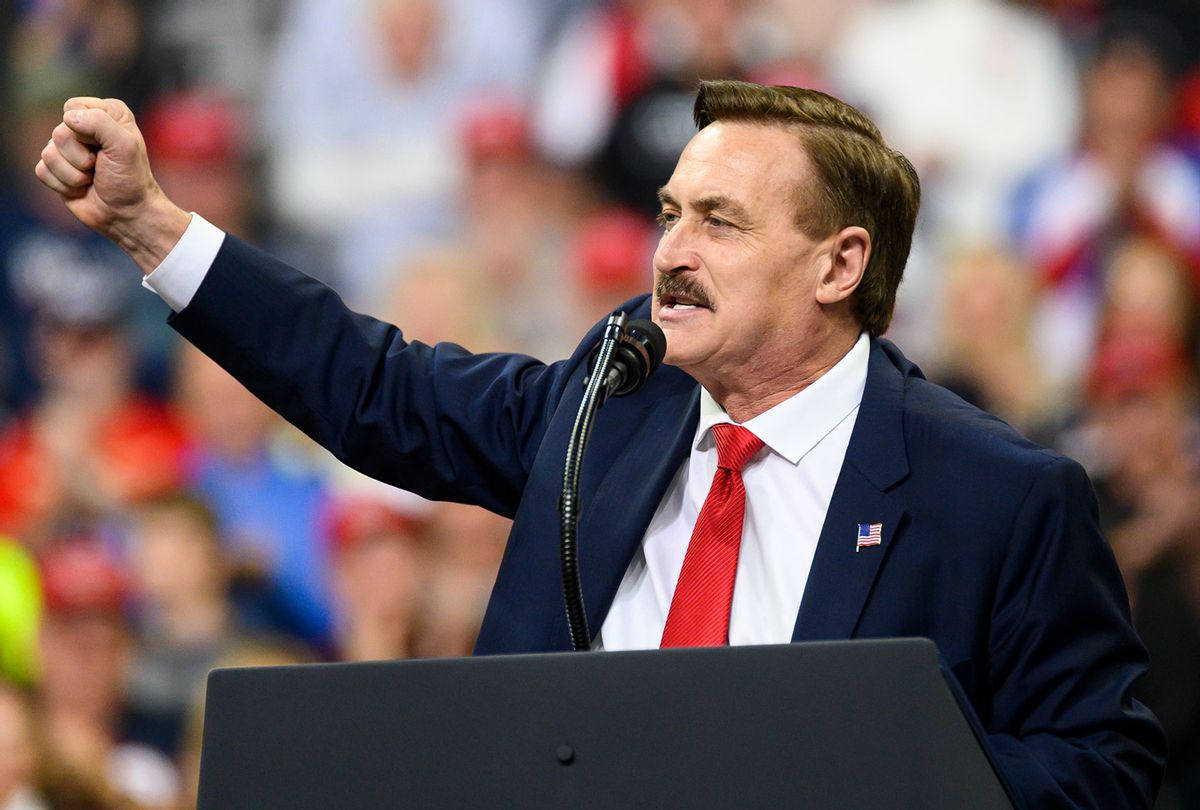 Mike Lindell is back on the Fox News airwaves once again.

The icy relationship between the conservative network and the bedding magnate-turned-election conspiracy theorist appeared to be thawing Thursday afternoon after eagle-eyed Twitter users spotted Lindell's mustachioed visage on Fox once again, where he was once one of the company's most prolific advertisers.

He used the spot, broadcast on Fox News' midday program "America Reports," to whine about "cancel culture" and the "millions" of people affected by the phenomenon, as well as hawk his bible-themed pillow products.

"Hello, I'm Mike Lindell," he opened. "Cancel culture has not only affected myself and MyPillow, but millions of you out there."

He then transitioned to a quick plug for his memoir — titled "What are the odds?" — before mentioning that he was offering the "best prices ever" on a set of five pillows with bible-themed images on them. Normally, Lindell said, the bundle cost more than $200 — but he's now offering the package for $99, and that deal even includes a copy of his book.

The entire infomercial harkened back to a past era of Fox News, before the relationship between the two parties turned icy.

Everything changed back in July when the MyPillow CEO angrily pulled his advertisements from the network after it ignored his South Dakota "cyber symposium" and declined to run advertisements for the gathering, at which Lindell had promised to unveil proof of industrial-scale election fraud that would propel former President Donald Trump back into office.

Obviously this proof never materialized, and in the aftermath of the widely panned event Salon learned that Lindell couldn't get his ads back on Fox News — despite his increasingly desperate attempts over the past few months to get back into the Rupert Murdoch-owned network's good graces.

According to Lindell, Fox News had barred him from mentioning both the election and his social media site, FrankSpeech.com, during his ads. During a broadcast on the site, he said Fox representatives "didn't like the content on the platform, the website, the stuff that was on FrankSpeech.com." They were almost surely referring to Lindell's use of the site to spread the false assertion that Trump had won last November's election due to widespread fraud.

"[Fox] has done more damage to our country than all the left wing media combined," he added at one point.

Both the network and Lindell have been mired in expensive lawsuits over false assertions relating to last year's presidential election. Unlike Lindell, Fox has stepped back in recent months from suggesting that President Joe Biden's victory was illegitimate.

Representatives for both Fox News and Lindell did not respond to Salon's requests for comment.

Before their falling-out this summer, Lindell was one of Fox News' biggest advertisers — dropping nearly $50 million in 2020 and close to $19 million in the first few months of 2021 alone.

He told The Wall Street Journal last week that he was not sure if he would return to his previous levels of spending.