Progressives play hardball — with Biden's support — and confuse the media

The press tries to portray infrastructure delay as Biden's loss, but progressives are trying to save his presidency 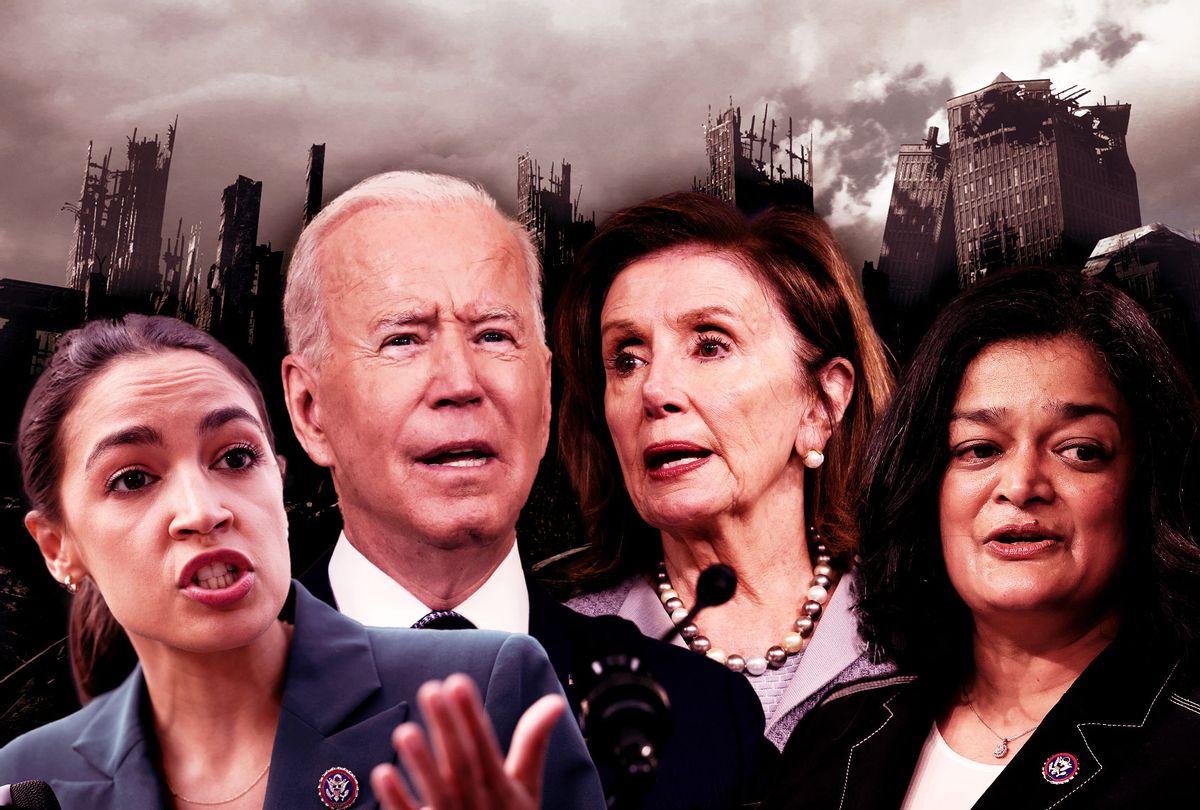 Late Thursday, the House's progressive caucus did what the long-received wisdom in D.C. believed they would never do: They stood their ground in the face of centrist sabotage.

Months ago, conservative Democrats demanded that President Joe Biden's ambitious infrastructure and jobs agenda be divided into two separate bills. They promised that doing so was just a way to get bipartisan support for some of it. But progressives feared that it was actually a way to destroy the parts of Biden's agenda that are popular with voters but not so popular with right-wing lobbyists.

Well, progressives had their fears confirmed this week.

A small centrist minority of Democrats, led by Sens. Joe Manchin of West Virginia and Kyrsten Sinema of Arizona, made it quite clear that they very much always intended to renege on their end of the pass-both-bills bargain the second Congress passed the only bill they care about, which is a small and bipartisan infrastructure bill. But rather than be bullied into accepting the betrayal, the progressive caucus in the House refused to vote for the smaller bill when the time came, forcing Speaker of the House Nancy Pelosi, D-Calif., to delay the vote that was scheduled for Thursday. Now much of the mainstream press, in a bout of epic wrongness, is portraying the delayed vote as a blow to Biden.

"House Delays Vote on Infrastructure, in Big Setback for Biden Agenda," reads the front page of the New York Times.

The Washington Post described the delayed vote as "a major setback for President Biden's economic agenda."

"The left defies Pelosi as Biden's big hopes are in limbo," declares the CNN headline.

But this framework is deeply misleading. Progressives who are forcing a delay on the vote aren't threatening Biden's agenda. They are the people who are trying to save it.

The actual threat to Biden's agenda is the small group of centrist Democrats. No matter how much they swear up and down that they aren't trying to gut Biden's agenda, their actions speak otherwise. There is absolutely no other reason for them to demand that a small, bipartisan bill pass by itself. It's clear that the second they get what they want, they will renege on their agreement to support the bigger bill supported not just by progressives, but by the White House and the majority of the Democratic caucus.

"The read that we have is that they'll just dump the second one [the BBB bill], leave the other one out to dry and just never actually vote on it." - Rep. Ocasio-Cortez on why progressives are insisting that the infrastructure bills remain paired. @AOC pic.twitter.com/QFILHu6Q0m

Unfortunately, the media has been portraying this fight as a battle between "progressives" and "moderates." But that is a flat-out false understanding. The vast majority of Democrats — including most who are more moderate — want both bills to pass and object to Manchin's and Sinema's antics. Progressives just happen to be the ones who are standing up for the majority of Democrats, as well as the majority of voters. Activist Bree Newsome pointed this out on Twitter, noting the press is "ignoring how public sentiment actually aligns w the progressive caucus b/c US govt is to the right of most Americans."

Rep. Pramila Jayapal of Washington, who heads the progressive caucus in the House, also objected to the mainstream media framing:

The Build Back Better Act isn't some fringe wish list — it's the Democratic Party's agenda.

From child care and paid leave to Medicare expansion and climate action, we can't have an equitable recovery without it.

Both women are right. The larger Biden agenda isn't the realm of a progressive minority but is broadly popular with the public. An August poll from Data for Progress shows that strong majorities of Americans back not just the small, bipartisan infrastructure bill, but the larger $3.5 trillion proposal that would expand childcare, improve health care, and fight climate change. Indeed, even as Republican voters have kneejerk opposition to it, they aren't that ginned up about it. Less than a third say they "strongly" oppose the bill. As Dan Pfeiffer points out in his Message Box newsletter, "Republican voters cannot get fired up to oppose one of the biggest expansions of the social safety net in decades," making passing this bill about the smartest political move possible for Democrats right now.

But, as I note in the Standing Room Only newsletter, Sinema and Manchin have been impervious to both reason and shame. The only language they clearly respond to is power. By flexing their muscle, progressives have finally rattled the confidence these two have that they can tank the Democratic agenda while getting everything they personally want. As Heather "Digby" Parton writes at Salon, both Manchin and Sinema started to show cracks in their grandstanding obstinance Thursday, meaning "that the two bills — and thus Biden's agenda — still have a chance for passage."

Indeed, the surest sign that progressives are trying to save, not tank, Biden's plan is that the White House appears to be quietly backing progressive's hardball play. As Politico reported on Thursday, sources close to the White House have signaled that "they are not displeased with all the talk about voting down the infrastructure package" and hope "the prospect of a progressive revolt will only add to the pressure they're attempting to exert on" on Manchin and Sinema.

If, as the headlines claim, this vote delay is a "setback" for Biden, it's an odd thing for Biden to be quietly supporting it. But of course, it's not a setback, so much as the only possible hope of saving the Biden agenda. Progressives are displaying the will to use the power that Democrats all too often shy away from. It's one reason Democrats have so long struggled to pass their policies, which in turn contributes to the general malaise that leads to lower voter turnout and bad electoral outcomes for Democrats.

Half-a-loaf is not enough to fire up voters for what is going to be difficult midterm elections, due to all the voter suppression and gerrymandering Republicans have been engaged in. Progressives are taking a big risk, but there is no possibility of a reward without it.