Yes, some Trumpers were dismayed by the "results" — but these fake audits are only part of a long-term strategy 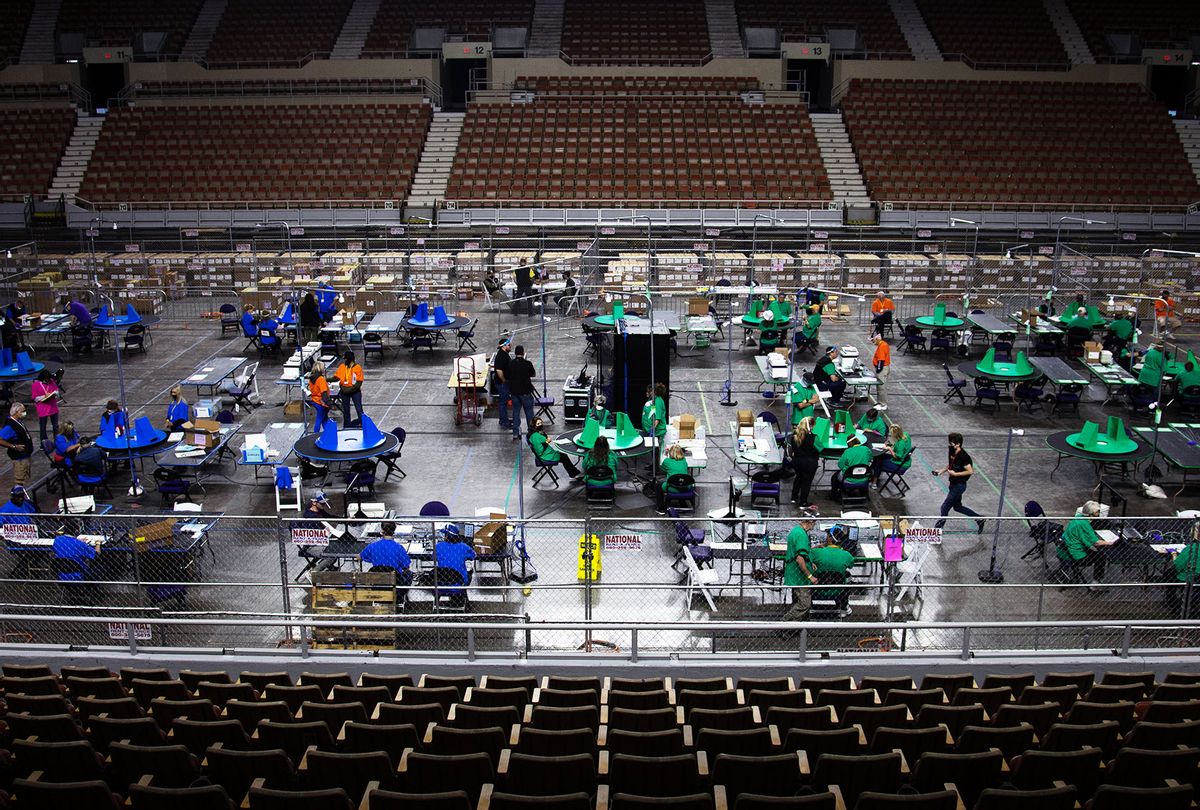 Contractors working for Cyber Ninjas, who was hired by the Arizona State Senate, examine and recount ballots from the 2020 general election at Veterans Memorial Coliseum on May 8, 2021 in Phoenix, Arizona. (Courtney Pedroza for the Washington Post)
--

Just over a week ago, the company that calls itself the Cyber Ninjas announced the results of its supposed "audit" of the 2020 election results in Maricopa County, Arizona, the state's major population center. Their findings were disappointing to hardcore Trump conspiracy theorists: Joe Biden's margin of victory actually increased by 99 votes, and there was no finding of systemic errors or election fraud.

In response, Donald Trump's critics and detractors among the news media, the liberal "resistance" and the general public resorted once again to laughter and mockery, resplendent in self-satisfaction that Trump's false claims had been debunked once again. All this was taken as one more example of how stupid, foolish and out of touch with reality Trump and his cultists really are.

If liberal schadenfreude were a drug, many of the Trump opposition were "high on their own supply" after the Arizona announcement.

As Trump's opponents dance in celebration of what they believe to be embarrassing setbacks for Trump and his movement, they had better beware of the pitfalls all around them. In reality, the fake audit in Arizona — which is soon to be copied in other states, including Texas — is another victory for Trump and the Republican-fascist movement in its war against American democracy.

Too many among the mainstream news media and political class are unwilling to acknowledge this fact, because they are products of, and beholden to an obsolescent way of thinking about politics and American society.

That world of "normal" politics is dying, and gradually being replaced by a malignant new normalcy. In response, new rules and frameworks must be adopted if we really want to stem the fascist tide. But decades of habit and personal, financial and emotional investment in a political and social system that rewarded American elites and their mouthpieces are not easy to reject.

To accept that new reality is a type of narcissistic injury; one's own obsolescence is a difficult thing to admit. It is a frightening and distressing to feel the old order turning into dust and sand as it slips through your fingers. In that moment, it's tempting to cling even harder, until there is nothing left to hold onto. Charles Pierce describes this in a recent essay at Esquire:

The scope of what is happening to self-government in this country seems to be far beyond the ability of many of our professional observers to contemplate. There is a straight line from angry school board meetings, to suppressive state election laws, to the continued thrall in which Trumpism holds the conservative movement, to the recalcitrance that will be demonstrated in the Congress over the next few days. The straight line continues beyond the events of this week, and you're not going to like where it eventually ends up.

If you still doubt that the fake election audits are successful tactics for Trump and the Republican-fascist movement, consider these facts:

Trumpism and other forms of fascism are fantasies dominated by backward reasoning. The leaders and followers have already decided that they have been betrayed, and will use any means available to win and keep power. They have committed themselves to a set of false "truths" in service to the cause. Reality as it actually exists will be bent and twisted to "prove" that these fantasies and their alternate reality are real.

These fake audits are a key component of the Big Lie, and strategically effective at maintaining control of the hearts and minds of Trump's followers and the Republican Party. Public opinion and other research has consistently demonstrated this; for example, more Republicans now believe the Big Lie about the 2020 presidential election than did  immediately after the insurrection of Jan. 6.

These fake audits and others will be used to provide false credibility to the Republican-fascist movement's attacks on democracy. If the fake audits "confirm" that Biden actually won — a self-evident fact — then the process has been shown to be "fair," creating a new norm in which the Republican-fascists and their operatives can "audit" any and all future elections in the future. Once this process becomes institutionalized, it can be used as a tool to undermine or overturn any elections won by Democrats.

The fake audits will also allow right-wing operatives to gain information about and access to voting systems, which will make vote theft, vote rigging and other types of real election fraud much more likely.

These fake audits are also a means of encouraging right-wing terrorism and political violence directed against Democrats and other designated enemies of the Republican-fascist movement. The Big Lie and its many associated little lies about the 2020 election have already resulted in violent threats and acts of intimidation against state and local election officials. These threats have become so extreme that many of experienced election workers are resigning or being forced out, and in many cases replaced by Trump Republicans in a coordinated campaign to control or undermine future elections.

Armed right-wing paramilitaries and other street thugs were present among the crowd in Phoenix waiting for the results of the fake audit. These threats of terrorism and other violence are not implied: If Trump and the Republicans lose elections or lose political power, the possibility of bloodshed grows more severe.

Belief in the Big Lie and the need for fake audits of the 2020 election has become a litmus test and loyalty oath for the Republican-fascist movement. If a Republican elected official, or even a private citizen, rejects these claims, they are to be purged from the movement for "disloyalty."

Donald Trump will in all likelihood be the 2024 Republican presidential nominee. The Big Lie and endless rounds of election "audits" are an excellent fundraising tool. Based on his previous behavior, Donald Trump will also use this money to line his own pockets.

In a new interview at Politico, Rick Hasen, a law professor at UC Irvine and expert on democratic institutions, explains the dire political crisis that America is facing and the role that "election subversion" — as seen in these fake audits — plays in the fascist onslaught:

So, Georgia recently passed a new voting law. One of the things that law does is it makes it a crime to give water to people waiting in a long line to vote — unless you're an election official, in which case you can direct people to water. That's voter suppression — that will deter some people who are stuck in a long line from voting. Election subversion is not about making it harder for people to vote, but about manipulating the outcome of the election so that the loser is declared the winner or put in power.

In 2020, things shifted. The rhetoric is so overheated that I think it provides the basis for millions of people to accept an actual stolen election as payback for the falsely claimed earlier "stolen" election. People are going to be more willing to cheat if they think they've been cheated out of their just deserts. And if [you believe] Trump really won, then you might take whatever steps are necessary to assure that he is not cheated the next time — even if that means cheating yourself. That's really the new danger that this wave of voter fraud claims presents.

The fake audits in Arizona and elsewhere are not a joke.Those who choose to laugh are driven by self-interest, anxiety, fear and denial. They are retreating from the ugly reality of the situation, and from the hard work that will be necessary to save or redeem democracy.