The incident was so blatant that South Dakota Gov. Kristi Noem allegedly texted Lewandowski to stop 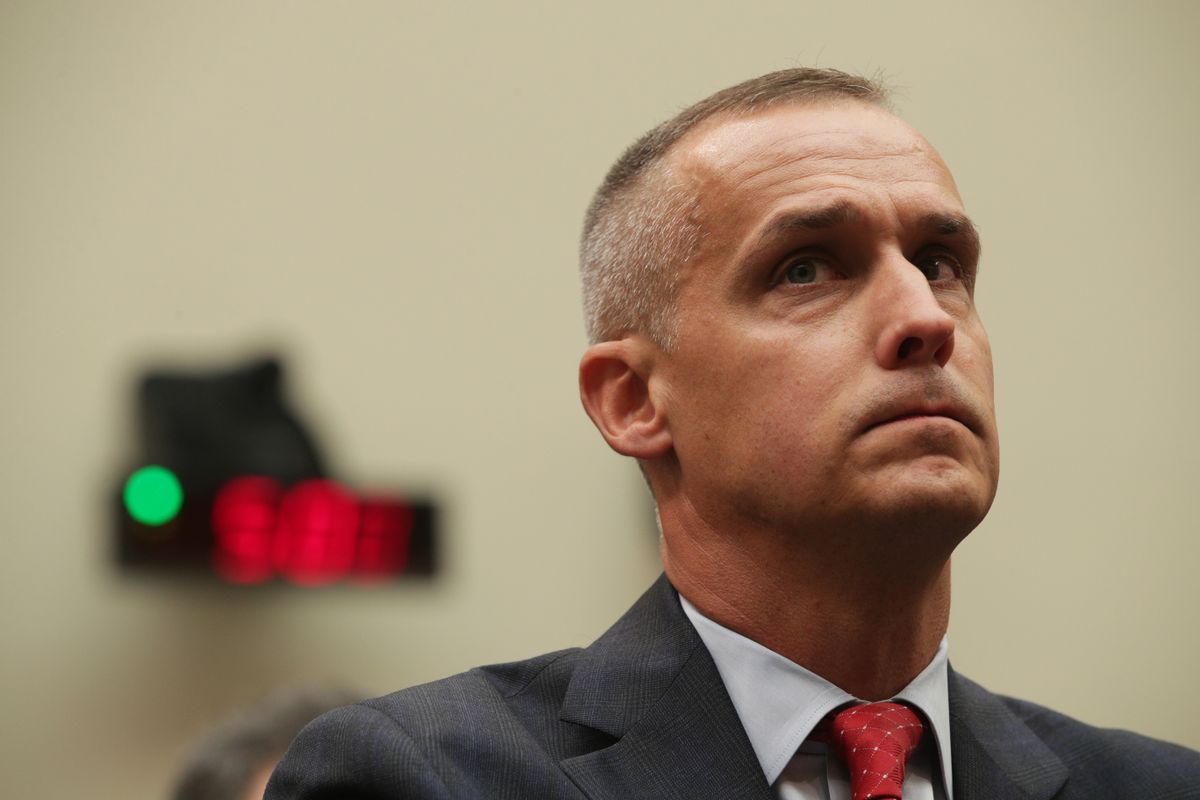 A top Republican Party donor who accused ex-Trump campaign manager Corey Lewandowski of groping her during a fundraiser outlined his entire night of bad behavior to local police — including the fact that he apparently bragged about stabbing and killing two men.

Trashelle Odom, who is married to an Idaho-based construction executive and conservative donor, said the comments made her fear for her safety, especially after her denial of Lewandowski's advances set off a fit of rage that prompted him to throw a drink at her.

According to Odom's statement, which was published in full by the U.K.-based tabloid The Daily Mail, Lewandowski was discussing his childhood in a "bad part of Boston" when he started talking about the people he had killed.

"I initially believed that he was joking and attempted to laugh it off, Odom told police, adding that he did not appear to be drunk. "That is when Lewandowski went into detail and stated something to the effect of, 'When I was 10, I stabbed someone over and over again, killing him.' He continued and shared that when he was older he stabbed a man in the back of the head, also killing him."

The story, along with Lewandowski's "aggressive sexual advances," made Odom visibly "intimidated and frightened and fearful," prompting another guest at the event to ask if she was okay. In fact, Odom alleges the incident was so blatant that South Dakota Gov. Kristi Noem texted Lewandowski to stop touching her.

Earlier this week Noem was also forced to deny reports in the right-wing press that she was engaged in an extramarital affair with Lewandowski.

Lewandowski's attorney, David Chesnoff, told NBC News that the "accusations and rumors appear to be morphing by the minute and we will not dignify them with a further response."

Following the allegations being made public, Lewandowski was fired from his job at the pro-Trump super PAC Make America Great Again Action. John Odom, Trashelle's husband, subsequently released a statement to the Daily Mail thanking "President Trump for taking swift and decisive action."

He also said his family "believes in law enforcement, and are hopeful that the police and prosecutors will use this information to pursue justice."

"For all others with information regarding this man's violent, harassing, and traumatizing behavior, we encourage you to speak up. Accountability is sorely needed,' he added.

Noem also announced this week that she would be severing ties with the embattled ex-Trump aide.

On the afternoon of September the 26th, 2021, I was riding in a Las Vegas bus with my sister and several other individuals, including Matt Schlapp. During that time, I was personally invited to attend a dinner with Gov. Kristi Noem by Jackie Siegal.

I was told that due to limited seating, I was the only one who could attend. Therefore, my family made other plans, and I changed clothes and arrived at the event at approximately 5:30pm to the Benihana private banquet room. At the event, there were seating arrangements, I was seated between Bubba Saulsbury and Corey Lewandowski.

Almost immediately, there were amicable jokes between Bubba Saulsbury and GOP operative Chris DeWitt (present and across the table) where they referred to one another as 'Cheese Dick.' Lewandowski entered the conversation with the comment that his 'dick is four inches bigger than a normal dick.' From there, Lewandowski proceeded to come on to me aggressively by first stating that, he works out twice a day, that he runs 400 miles a week, and that's why he can last for 8 hours at a time in bed.

He went so far as requesting the suite number I was staying in and indicated he was staying in the 'Elvis Suite' which I now know as untrue. Eventually, he showed me his room key, room 2991, which was next door to my suite, 2989, where I was staying with my sister and children.

Trying to change the subject, I asked Lewandowski about his wife and kids, as I am very proud of the fact that I am happily married, with children. Mr. Lewandowski replied that, 'he does not do anything with his wife- he gets his sex elsewhere.' Around that time, he commented that Gov. Noem is hot. I have a cell phone case and on the back of it, it displays 'Mrs. Odom.'

Lewandowski saw that and became visibly angry with me and demanded to know why I would have that. It was as if he thought he had a sense of ownership over me, from the start. He stated several times that, 'he is very powerful and can destroy anyone.' He said he was close with President Trump and can get anyone elected or can take anyone out.

That is when Lewandowski went into detail and stated something to the effect of, 'when I was 10, I stabbed someone over and over again, killing him.' He continued and shared that when he was older he, 'stabbed a man in the back of the head, also killing him.'

Those statements, coupled with his demeanor and aggressive behaviors, I was intimidated and frightened and fearful for my safety and that of my family members.

I immediately tried to think of how I could delicately extract myself from Lewandowski while simultaneously trying to respect the event and staying near others for safety.

His behavior was so aggressive that others began to notice and another guest even came over to ask if I was okay. I even texted my sister (and others) in a group message, 'wtf.' Lewandowski was watching me type, and so I did not feel safe to expound more.

Lewandowski told me that he was 'sore from a workout' and proceeded to demonstrate where he was sore from a workout, on the side of his butt, and he (without my permission or desire) touched me there. Ultimately, I believe I rebuffed him approximately 10 times.

When dinner arrived, I was still very uncomfortable, and Lewandowski's behavior continued. He began ordering me drinks, that I wasn't drinking, so he ultimately drank them. He also ate directly from my plate and used my utensils. He would occasionally try to play with my upper back with his fingertips. I did not eat. I eventually was able to leave my seat and sought out Chris DeWitt and asked him to help me get away from Lewandowski. I retreated to a small sitting area and called my sister.

When I hung up I told her that I love her. Lewandowski was right there following me and gave me a glaring look and demanded to know who I was speaking with. I complied, told him my sister, out of fear. As I walked to the elevator, to go to the Verona Suite, where the hosts were having a reception after the dinner on the 30th floor.

There was an auction, speakers, and socializing. Rick Kofoed was present as was Lewandowski. We elected to take the stairs instead. While descending the stairs, Lewandowski repeatedly commented, 'Nice ass' to me. Rick apologized to me stating, 'Corey does this a lot.' It was apparent that my reactions to Lewandowski's stories, threats, and aggressive sexual advances were not normal for Lewandowski as Lewandowski ultimately threw his drink at me, hitting my dress, shoe, and foot.

When I confronted Lewandowski and asked if he threw his drink at me, I believe he called me stupid. I followed up and asked, 'Did you call me stupid?' He responded with, 'Why, you don't like that?' I spotted my sister and went with her up the elevator to the reception on the 30th floor.

Please note that these were my first events as a member of the advisory board of this charity, so it was important to me to attend and be supportive. I never expected to have this experience.

At some point, after I briefly spoke with Gov. Noem, Lewandowski appeared and immediately came over to my stepson, sister, and me. He stated he wanted a 'private tour' and beckoned me to leave the group and take him on a tour. I immediately declined and walked off with my sister and stepson.

I went to the bar on the other side of the suite with my sister and stepson to try and escape Lewandowski and his stalking. I approached Mr. Dewitt and asked him why he didn't help me. He stated that he told Stacey Kofoed, the wife of Rick Kofoed, so that she could potentially help me. I went to the bar, Lewandowski followed.

Stacey Kofoed and Chris DeWitt brought me to the other side of the bar to get me away from Lewandowski. Stacey said that, "Corey is always like this." Lewandowski continued to move around and wrapped his arm around Mrs. Kofoed to try and touch me. He touched my back to which I immediately adjusted my posture and he shot me a nasty look.

Eventually, Lewandowski left. Gov. Noem left. I stayed to attend the other portions of the event then wanted to head to my room as I wanted to take my family for ice cream on the strip to try and calm down.

As I walked to the elevator, Rick Kofoed was coming off the elevator. He said he was so sorry. Stacey was talking to Corey. I took the elevator to my room, which I knew was next to Lewandowski. He was in the hall. He looked angry and terrifying. It was very clear he was not sorry for his actions but mad.

He appeared sober in his speech and actions. I went into my room crying and trembling as I did not know if I had just ruined everything that my family had worked so hard to grow. My family told me that he was pacing outside my room in the hall while on the phone. However, I gathered myself and took my family members out for ice cream.

After, I was convinced to join friends at the Conrad Hotel, I did, but left quickly after having a glass of water. I made sure my family was with me as I went back to the hotel as I was fearful knowing that Lewandowski was staying next to me.