Why does organic mayo taste funny?

It's all about the oil, it turns out 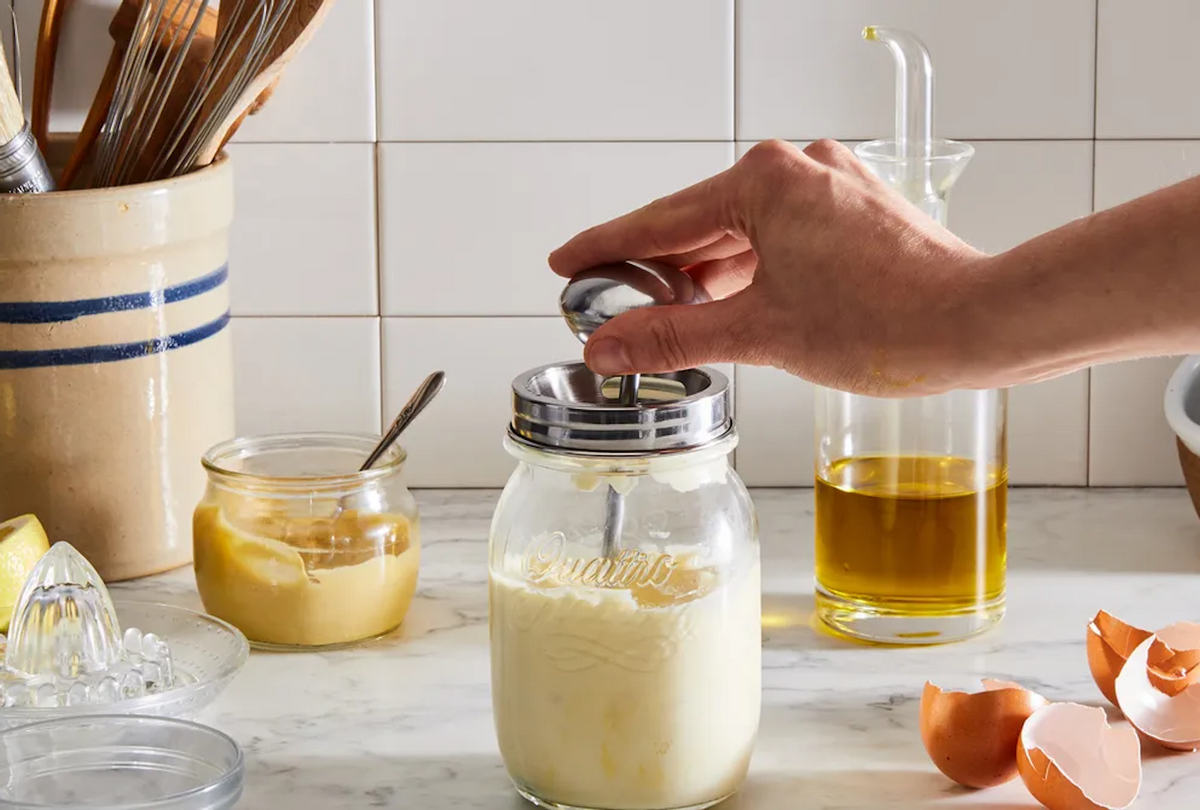 On the whole, I support buying organic foods whenever available and affordable. I welcome the occasional critter on the inner lettuce leaves; it's his land, too. The sole, willful exception I make when buying organic is mayonnaise, because it tastes, well, weird — usually like stale nuts offset by an assertive tang.

I consider mayonnaise to be one of life's great little flourishes, the condiment equivalent of a ruffle on a sleeve or dab of glitter on the corner of each eye. I'm also a Hellmann's and Duke's mayo lifer. I count on these products' unfailing balance of creaminess, salt and tang to lend swipes of richness to turkey, ham, or tomato sandwiches, and subtle roundness to tuna salads and vinaigrettes.

I've tried buying organic mayo in the past, but even in small doses, it tastes funny enough to alter entire dishes. People reassure me that it's because I haven't found the right brand. What about Sir Kensington's? Spectrum? Chosen Foods with avocado oil? Off. Off. The latter is far and away the best, but still no Hellmann's.

Wrong. Two tubs later (to be sure it wasn't a fluke), that familiar stale-nut taste overwhelmed my no-fail tuna salad, lingering on my tongue long after lunch like an unwelcome guest. That afternoon, I emailed the company asking why it tasted different and whether the legions of Hellmann's lifers like me noticed, too.

After weeks with no reply, I sought answers at the next best place: world-renowned authority on the chemistry of food and cooking, Harold McGee, who wrote "On Food and Cooking." Like some sort of food science therapist, he immediately categorized the off flavors I was struggling to decipher. "Products that lack an antioxidant or preservative are likely to develop rancidity in the oil," he wrote, "and that can be metallic, fishy, painty, or stale-nut-like depending on the recipe."

Mary Ellen Camire, PhD and food science professor at the University of Maine's School of Food and Agriculture, concurred that rancid oils were likely the culprit, owing to "not enough vitamin E and other natural antioxidants" in the organic version. It's not detrimental to us; it just doesn't taste right.

When I compared the ingredient list between regular and organic Hellmann's, I found that besides the organic versions of eggs, soybean oil, vinegar and lemon concentrate, the most notable differences in the organic version were the addition of dried cane syrup ("likely to balance the tartness of the vinegar and mask oxidation off-flavors," Camire said) and the absence of a preservative called calcium disodium EDTA.

Turns out, said additive is regular mayo's magic ingredient. An odorless crystalline powder with a slightly salty flavor, calcium disodium EDTA is a chelating agent, meaning it binds to metals and prevents them from participating in chemical reactions that might cause spoilage or loss of flavor and color. The FDA deems it safe for these uses in mayo at levels of up to 75 parts per million. (If, like me, a part per million means nothing to you, visualize instead putting four drops of ink in a 55-gallon barrel of water and mixing it thoroughly.)

Surely there are organic antioxidants that can stave off rancidity in oils, too? Rosemary extract comes to mind (and is used in Chosen Foods' organic mayo, which boasts high customer reviews for flavor), though it can contribute herbaceous flavors.

McGee pointed to organic concentrates of vitamin E, aka tocopherols, as the best bet for mayo. "They're usually extracted from vegetable oils, where they occur naturally but in relatively dilute form," he wrote.

But this still doesn't answer how this poor facsimile of Hellmann's mayo passed muster at a massive food company like Unilever, where consistency is king. Where trained sensory panels are deployed to taste mayo for a living with palates adapted to detect such taints in anticipation of scrutiny from Hellmann's lifers' "mayo-attuned palates." (I wish I'd coined this phrase, but credit goes to Mackenzie Hannum, a postdoctoral fellow at the nonprofit Monell Chemical Senses Center at the University City Science Center campus in Philadelphia, whose research centers on how and why people perceive taste and smell the way they do.)

"As a company, you want it to be as good as the real thing," said Hannum. "They might have tested it with the sensory panel and know that they recognize a slight off taste, then tested it with Whole Foods organic shoppers who may have been more inclined to think that it's OK. At the end of the day, you want to taste good for every person, but all our palates are different. Companies will go on consensus."

Perhaps the focus groups sampled the mayo long before the oils had time to oxidize during the long journey to store shelves, where it would then wait to be purchased for days or even weeks. If you thought refrigeration might be the answer, all three food scientists told me that shipping and storing at lower temperatures can only delay, not prevent, rancidity in fats. Not to mention, "refrigerated storage costs much more," Camire added.

The next (or maybe first) best thing, of course, would be to make my own mayo using my own mostly organic ingredients. Because as all this digging reminded me, an egg-, oil- and acid-based emulsion was never really intended to live for months on a supermarket shelf, chilled or not. Still, no matter how often I try, I can never get mine to taste quite as good as Duke's or Hellmann's.