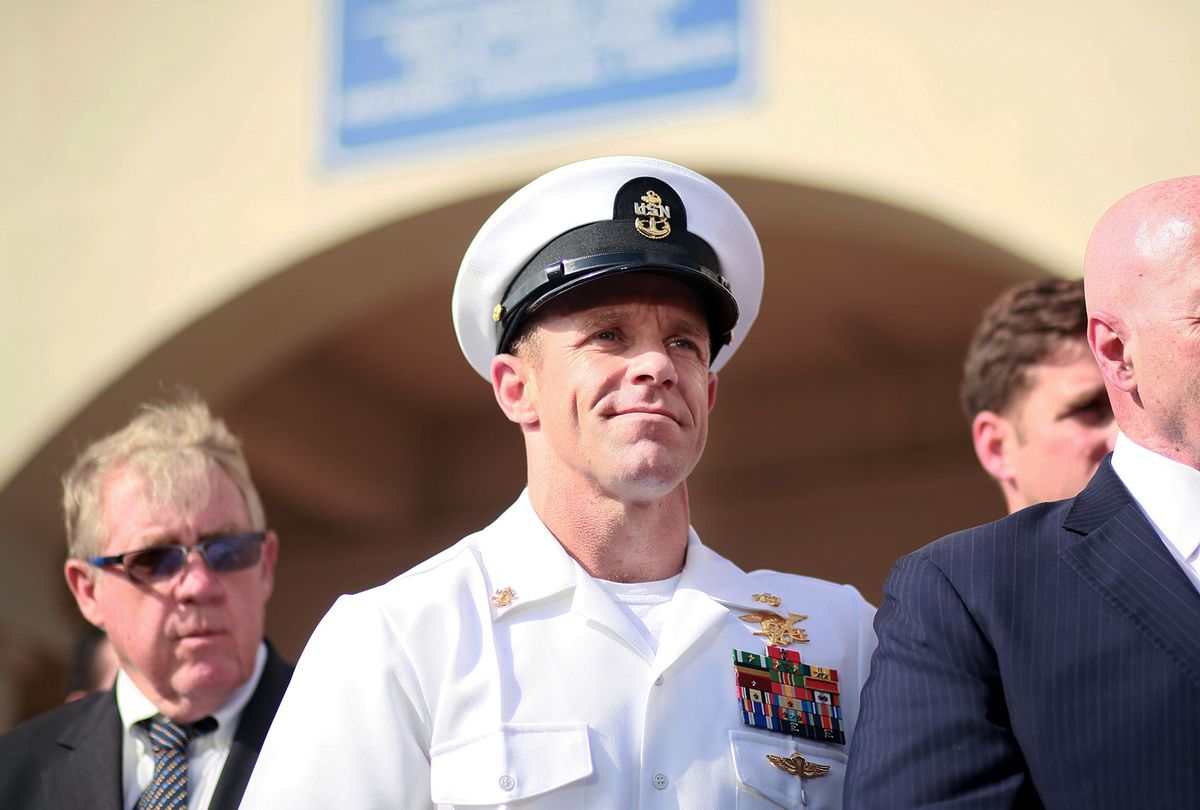 Navy Special Operations Chief Edward Gallagher celebrates after being acquitted of premeditated murder at Naval Base San Diego July 2, 2019 in San Diego, California. Gallagher was found not guilty in the killing of a wounded Islamic State captive in Iraq in 2017. He was cleared of all charges but one of posing for photos with the dead body of the captive. (Sandy Huffaker/Getty Images)
--

This latest TrumpWorld internal drama began last month when Scheller faced discipline from his Marine Corps superiors after speaking out against his bosses over the Afghanistan withdrawal.

In what became a viral video in right-wing media, on Aug. 26 Scheller said: "People are upset because their senior leaders let them down. And none of them are raising their hands and accepting accountability or saying, 'We messed this up.'"

Shortly thereafter, the Marine officer lost his post and was briefly jailed for his social media posting, in violation of orders to halt his online activities. On Tuesday afternoon, he was apparently "released from the brig." Throughout the multi-week affair, his parents, Stu and Cathy Scheller, have spoken out, claiming that the Marine Corps told them their son could face "a long prison term."

That's possible: Scheller now faces a series of serious charges under the Uniform Code of Military Justice, including charges of "willfully disobeying a superior commissioned officer" and "failure to obey an order."

The right-wing ecosystem roused itself, and financial aid from pro-Trump online forces poured in on Scheller's behalf, directed to his family and legal defense team.

Eddie Gallagher, who was accused of murdering an Iraqi POW in 2017 but later acquitted, stepped in with his Pipe Hitter Foundation, which to date has raised north of $2.5 million on Scheller's behalf. But here's the rub: After Scheller expressed mild criticism of the twice-impeached ex-president in a recent Facebook post, TrumpWorld donors are livid and want their money back.

This donor backlash appears to have been sparked by a Sept. 25 post in which Scheller said, "President Trump. I was told by everyone to kiss the ring because of your following and power. I refuse. While I respect your foreign policy positions, I hate how you divided the country. I don't need or want your help. You do not have the ability to pull [the] U.S. together. You may even win the next election. But your generation's time is running out."

Next Schiller took aim at Donald Trump Jr., the former president's eldest son, stating: "Tell your son to stop tweeting about me. Your whole family knows nothing about [the] U.S. or our sacrifices. I could never work with you. I'd rather sit in jail and be released with a dishonorable [discharge] than make compromises in my beliefs."

Oh my word: Trumpist donors, by the hundreds, are beside themselves. One donor who identified herself as Barbra wrote: "What a scam artist you are! Worse than BLM last year! Give the money back! Cry baby! You are mental and your kids and wife will suffer. Karma all the way here. You knew damn well what you were doing to prey on people for Money!"

Barbra, by her own account, had given $3. She concluded: "A real Marine doesn't have mommy and daddy crying for him!"

Gallagher and his Pipe Hitter Foundation didn't return Salon's request for comment on this story.

Another anonymous donor wrote: "You and to your family [sic] are frauds! Tell your parents to cry on the fake news channels. You hate Trump, his kids, and you think he divided this Country? You need help? Tell your loser family this E9 said [to] go to hell."

"Yes, I am making the MINIMUM $3 donation to let everyone else know to look you up before they consider any $$$ support for you," another disgruntled donor wrote, in an apparent effort to warn away other Trump supporter.

"How dare you disrespect President Trump," wrote Marc. "Please refund my earlier donation. If the election wasn't stolen, you wouldn't be in jail right now because Trump would NEVER have allowed it. Thanks for your service, but maybe it's your big mouth that's causing all your issues."

Since Scheller went rogue with his anti-Trump comments, Gallagher's organization has been tasked with issuing refunds to angry Trump supporters who had initially flocked to the cause.

"We have been working all day today in giving people their money back, if they are asking for it," Gallagher told Steve Bannon on his "War Room: Pandemic" podcast earlier this week. "It's understandable," the former Navy SEAL added.

Gallagher insisted his foundation would not back down from supporting Scheller and his family, despite the backlash from Trump loyalists: "We are going to continue to raise money for them and help them out." How that will be received remains to be seen.