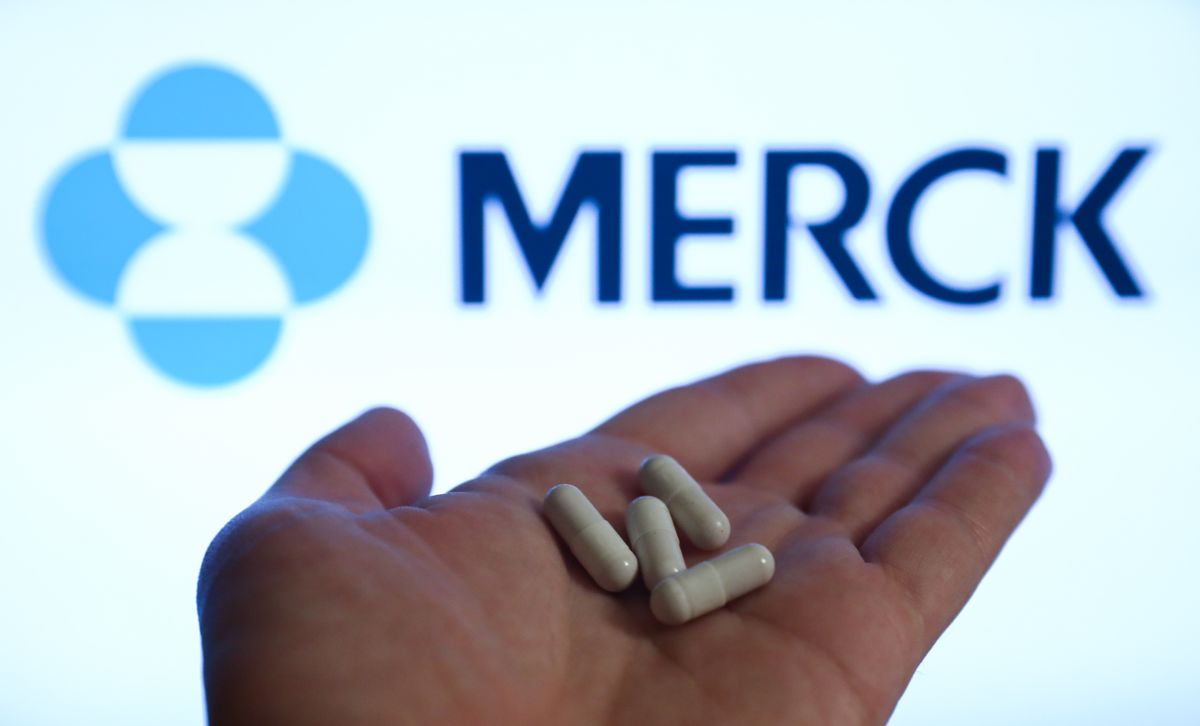 The New Jersey-based pharmaceutical giant Merck is facing accusations of price gouging after it charged the U.S. over $700 per patient for a taxpayer-funded coronavirus treatment that, according to research, costs just $17.74 to produce.

Last week, Merck announced plans to request emergency federal authorization for molnupiravir after a late-stage clinical trial showed that a five-day course of the antiviral drug cut the risk of COVID-19 hospitalization or death in half in patients with mild-to-moderate cases.

The same day Merck unveiled the results of the trial and White House officials hailed the drug as another possible tool against COVID-19, the "New York Times" reported that "the federal government has placed advance orders for 1.7 million courses of treatment, at a price of about $700 per patient"—far more than the estimated cost of manufacturing the drug.

According to an analysis by Melissa Barber of Harvard T. H. Chan School of Public Health and Dzintars Gotham of King's College Hospital in London, "the cost of production for molnupiravir capsules is US$1.74 per unit, or US$17.74 per five-day regimen."

"Adding an allowance for 10% profit margin and taxes in India, we arrive at an estimated sustainable generic price of US$1.96 per capsule or US$19.99 per five-day regimen," the researchers concluded.

Dean Baker, a senior economist at the Center for Economic and Policy Research, noted that the $712 price-per-course price the U.S. government is set to pay for molnupiravir amounts to a roughly 4,000% markup.

"Quartz"'s Annalisa Merelli reported last week that with Merck expecting to produce 10 million courses of molnupiravir before the end of 2021, the company "could bring in revenue up to $7 billion."

"This would make it, in only a few weeks, one of the 10 most lucrative drugs ever," Merelli observed.

If authorized by the U.S. Food and Drug Administration, molnupiravir—which Merck developed in partnership with the Miami-based firm Ridgeback Biotherapeutics—would be the first antiviral pill approved to treat COVID-19, potentially a major breakthrough in the fight against the global pandemic.

But it's unclear how accessible the treatment will be for people in the U.S. and around the world, given its cost and Merck's monopoly control over production. Numerous countries, including Singapore and Thailand, are already racing to secure access to the drug.

Heidi Chow of the Jubilee Debt Campaign decried the $700-per-patient price the U.S. government paid for molnupiravir as "another example of Big Pharma reaping billions from public investment into research by charging extortionate, rip-off prices for lifesaving COVID drugs."

"This is why we need to waive patents on all COVID treatments and vaccines," said Chow.

As "The Intercept"'s Sharon Lerner reported Tuesday, molnupiravir was developed with the help of tens of millions of dollars in U.S. government funding.

"The Defense Threat Reduction Agency, a division of the Department of Defense, provided more than $10 million of funding in 2013 and 2015 to Emory University," from which Ridgeback licensed the drug in 2020, Lerner noted. "The National Institute of Allergy and Infectious Diseases, part of the National Institutes of Health, also provided Emory with more than $19 million in additional grants."

In addition to slamming Merck for selling the drug to the U.S. at a price 40 times higher than the cost of production, public health advocates stressed the Biden administration has an obligation to ensure that the treatment is made widely available and affordable to all.

"The public funded this drug, and therefore the public has some rights, including the rights you have it available under reasonable terms," Luis Gil Abinader, a senior researcher at Knowledge Ecology International, told "The Intercept".

Abinader pointed to the federal government's so-called "march in" rights under the Bayh-Dole Act. That law, enacted in 1980, allows the government to intervene and license a federally funded drug to a third party if the manufacturer fails to make the medicine "available to the public on reasonable terms." The U.S. government has never exercised its march in rights to drive down the cost of a drug.

"The pressure for march-in rights around this drug is going to be huge," Abinader said of molnupiravir. "When the Biden administration negotiates another supply agreement with Merck, they should probably leverage those rights in order to get a better price."