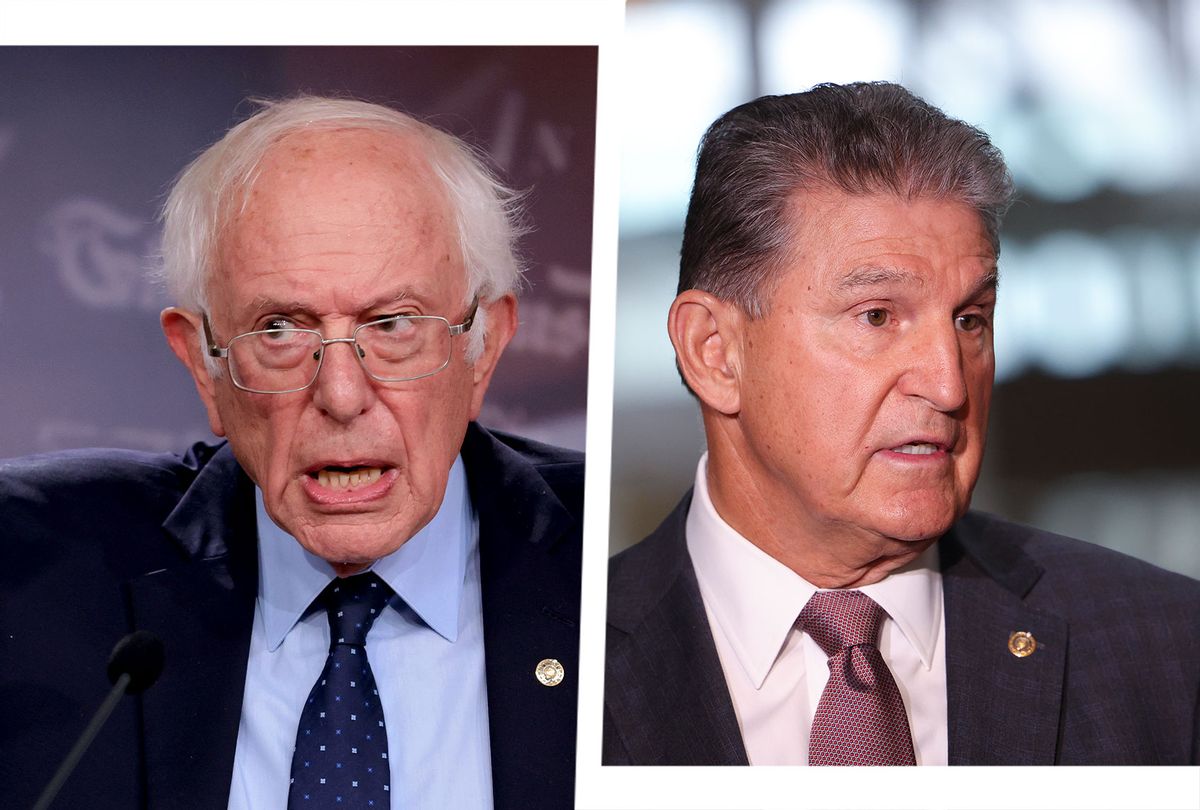 Sen. Joe Manchin, D-W.Va., is pushing to drop many of the Democrats' key priorities from President Biden's Build Back Better plan — but has drawn a harsh rebuke from Senate Budget Committee Chairman Bernie Sanders, I-Vt., for playing coy about what provisions he would actually support.

Manchin is pushing Democrats to pick just one of their three major proposed policies to help families, which include an extension of the enhanced Child Tax Credit, paid family medical leave, and subsidies for child care, according to Axios.

Democrats are scrambling to find a compromise between Manchin's $1.5 trillion counteroffer and Biden's $3.5 trillion BBB plan. Manchin and centrists in the House want to cut the number of programs included in the bill while progressives are looking to include as many of their priorities as possible, but are willing to shorten the timespan of programs in order to reduce the overall cost. Biden is seeking a compromise at around $2 trillion.

Manchin has also balked at the Democrats' proposal to expand Medicare coverage to hearing, dental and vision, arguing that Congress first needs to "stabilize" the existing Medicare program. Manchin, who holds a large investment in a coal company and is a top recipient of campaign donations from energy firms, has also pushed back on Democrats' proposals to combat climate change.

But months into these tense negotiations, other Democrats are getting restless at Manchin's apparent refusal to say exactly what he would support.

Sanders had similar criticism for Sen. Kyrsten Sinema, D-Ariz., who has refused to talk to the press or her constituents about what she would accept but has ruled out supporting the $3.5 trillion price tag. Sinema, a top recipient of donations from pharmaceutical companies and industry groups lobbying to kill the bill, reportedly opposes the Democrats' proposal to allow Medicare to negotiate prescription drug prices, and also opposes tax increases on corporations and the wealthy. Manchin has also expressed concerns about proposed tax hikes, but has signaled a willingness to reverse some Trump-era corporate tax cuts and supports the prescription drug bill, which could further complicate negotiations.

"Sen. Sinema's position is that she doesn't quote-unquote negotiate publicly," Sanders said Wednesday. "I don't know what that means. We don't know where she's coming from. Tell us what you want."

Sanders this week declined to support a joint Democratic statement condemning last week's protests against Sinema in her home state, where she was heckled during her class at Arizona State University and later confronted in a restroom. Sanders refused to sign the statement because it did not also include a "rebuke of her political views," according to Axios.

During his own press conference, Manchin denied that he has been "vague" about his position.

"My number has been $1.5 trillion. I've been very clear,"  he told reporters, adding that he and Sanders "share very different policy and political beliefs" and suggesting that Democrats who back the larger Biden bill want to "turn our society into an entitlement society."

Sanders accused Manchin and Sinema of trying to undermine their entire party's agenda.

"Two people do not have the right to sabotage what 48 want, what the president of the United States wants," he said.

Sanders further questioned whether Manchin considers protections for working families and measures to cut childhood poverty as examples of "entitlement."

"Does Sen. Manchin really believe that seniors are not entitled to digest their food, and that they're not entitled to hear and see properly?" he said. "Is that really too much to ask in the richest country on Earth — that elderly people have teeth in their mouth and can see and can hear?"

Sanders also observed that he could withhold support for the larger Build Back Better plan because it doesn't include many of his most important priorities, such as Medicare for All. "But I'm not going to do that," he said, because it "would be irresponsible."