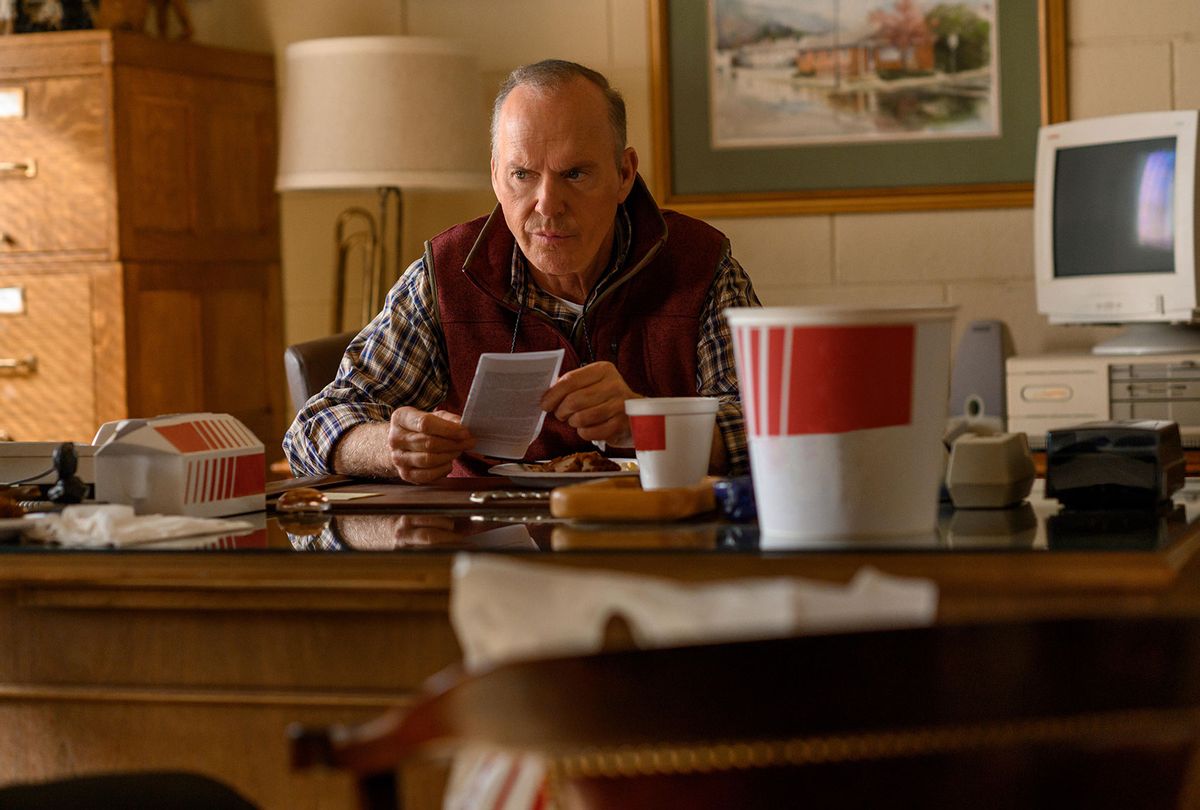 Perhaps the most effective props in "Dopesick" are the laminated illustrations of the Wong-Baker FACES Pain Rating Scale, friendly smiley faces that were originally created for use in pediatric medical settings. Reducing pain to a cartoon scale — with ratings falling between a green, grinning "No Pain" circle and a red, weeping "Worst Pain Possible" drawing — were a crucial part of Purdue Pharma's plan to put a friendly face on its highly addictive painkiller OxyContin. When a doctor pulls one out to show a patient, that's a warning flag that life for that person is about to get a whole lot worse.

The pain rating scale's frequent appearances also provide regular reminders of the moderate discomfort created by this viewing experience, but only in its most affecting scenes. In the main, watching the eight-episode limited series is numbing. That's not a feeling a show like this should engender in viewers.

Anyone committed to watch "Dopesick" should expect a tough viewing experience, since it endeavors to show us how our opioid crisis came to be. But while Danny Strong's adaptation of Beth Macy's New York Times bestseller "Dopesick: Dealers, Doctors, and the Drug Company That Addicted America" provides an adequate explainer of the epidemic's nascency, its hyperactive leapfrogging between 1986 and the early-to-mid aughts is needlessly baffling.

"Dopesick" debuts months after a U.S. bankruptcy judge approved Purdue's plan to resolve thousands of opioid lawsuits by the Sackler family contributing about $4.5 billion of their own cash, selling their pharmaceutical holdings, and forfeiting their equity in Purdue.

In exchange, members of the family will receive lifetime immunity from civil lawsuits over their role in promoting and encouraging the accelerated usage of OxyContin.

Knowing this, this show should enrage you. But it never earns that mood spike, robbing the story of its potency and undercutting the excellent performances from a strong ensemble fronted by Michael Keaton and Rosario Dawson, Michael Stuhlbarg and Peter Sarsgaard, who co-starred in Hulu's other star-studded and very important piece, the fictionalized 9/11 drama "The Looming Tower."

The recent court decision conflicts with the vision of Strong and director Barry Levinson in "Dopesick," in which the narrative places blame primarily on Richard Sackler (Stuhlbarg). Through the script and Stuhlbarg's portrayal of Sackler as a cold, unfeeling, small man determined to leave a giant's footprints in history, the series indicts Richard's ravenous ego and insatiable need to eclipse his uncle Arthur's legacy.

Stuhlbarg, a frequent player in prestige dramas like this one, plays the part well. He makes Richard's perma-frown the first trait we notice, as he rehearses a speech in a dim room that begins, "The time has come to redefine the nature of pain."

Even in those first moments with Richard, his strain to sound both charitable and serious allows us to understand that he's not trying to palliate agony but create it (alongside with profits). And Stuhlbarg's performance is convincingly chilly, despite the fact that he and the rest of the Sacklers are written like low-rent Bond villains.

Granted, this is not expressly Richard Sackler's story. It's also the tale of a determined DEA agent Bridget Meyer (Dawson) screaming into the wind as she tries to warn government officials about what Purdue is unleashing in small towns.

It's also the story of a kind, attentive country doctor, Samuel Finnix (Keaton), who becomes one of Purdue's earliest clients by prescribing the drug to injured coal miners in his Appalachian community — including a young woman named Betsy (Kaitlyn Dever) — and the boyish sales rep (Will Poulter) who gets him on the hook.

Floating between these two stories are Sarsgaard's U.S. Attorney Rick Mountcastle and John Hoogenakker's Randy Ramseyer, a pair of crusaders who join Meyer's efforts well after she's passed the point of absolute frustration.

Crafting "Dopesick" into an intriguing fictional narrative is no simple task, which is why the job fell to Strong, the guy who gave us "Recount" and later on, "Empire." Purdue Pharma's deliberately misleading branding of OxyContin is a story of massive malfeasance that exemplifies the coziness between multibillions corporations and federal government agencies that are supposed to protect everyday Americans. That requires significant explanations of how the law was bent or broken; and, on top of that, how it was artfully but simply circumvented in some cases.

Some of the most consequential turns in Purdue's favor portrayed here are the result of someone at the Food & Drug Administration either failing to properly read proposed changes; or, more often than not, turning a blind eye to new information brought to their attention. Explaining the intricacies of these developments can bog down each episode's movement, which is why Strong emphasizes the far more relatable irritation our intrepid agents experience when they're intentionally stonewalled.

But it's a mistake to shove at least three made-for-TV movie plots into a single limited series.

A couple of these arcs could stand on their own, especially the one anchored by Keaton's sensitive performance and Dever's raw, painful portrayal of a woman in a small town who, for so many reasons, never stood a chance.

But we don't spend enough time with these characters together, or separately, to wholly connect with their pain. As a result, the series never convincingly establishes why her attempts to nab Purdue destroy the personal life of Dawson's DEA agent character.

Indeed, none of the characters' tales feel fully realized, or even complete, at the end of the seven episodes made available for review.  Since Strong's script leans heavily on humanizing the toll this emergency is taking on every aspect of American life — save for the people profiting off it — that lack of substance ultimately defeats the story.

With the stylistic details lurk other annoyances, including the Hollywood trope of establishing coal country with a fiddle-heavy soundtrack, made keenly grating by placing it beside the lilting, antiseptic violin concertos that accompany each resplendent Sackler family shareholder meeting. Perhaps if the overall production were better, the musical cues wouldn't even be noticeable; but as it is, they're a distraction on top of multiple detractions.

The opioid epidemic wreaked by OxyContin is amply and ably covered in several non-fiction treatments, whether you seek it out by way of Frontline's ongoing coverage, via a docuseries such as Alex Gibney's excellent "Crime of the Century," or otherwise. "Dopesick" could have provided a moving fictionalized alternative for people who don't watch documentaries but still want to understand how these tiny pills came to be such a destructive force in modern society. Instead, we're given a tragedy lacking adequate conflict and drama whose miserable ending is still playing out.

The first three episodes of "Dopesick" are currently streaming on Hulu.