The manufacturer of OxyContin faces $8.3 billion in penalties, and the owning family could owe $225 million 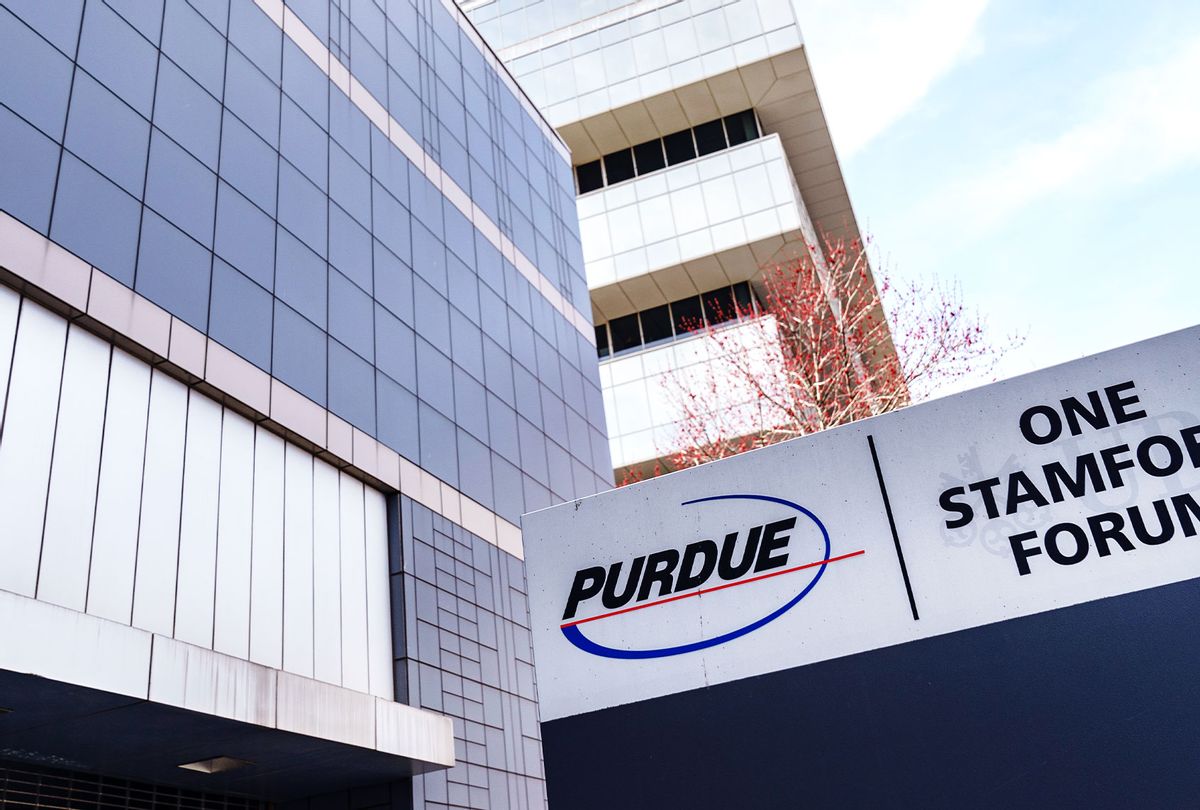 Purdue Pharma headquarters stands in downtown Stamford, April 2, 2019 in Stamford, Connecticut. Purdue Pharma, the maker of OxyContin, and its owners, the Sackler family, are facing hundreds of lawsuits across the country for the company's alleged role in the opioid epidemic that has killed more than 200,000 Americans over the past 20 years. (Drew Angerer/Getty Images)
--

"Today's resolution is the result of years of hard work by the FBI and its partners to combat the opioid crisis in the U.S.," Steven M. D'Antuono, Assistant Director in Charge of the FBI Washington Field Office, explained in the Justice Department's official announcement. "Purdue, through greed and violation of the law, prioritized money over the health and well-being of patients. The FBI remains committed to holding companies accountable for their illegal and inexcusable activity and to seeking justice, on behalf of the victims, for those who contributed to the opioid crisis."

Because Purdue is currently in bankruptcy court, it is unlikely that the company will ultimately pay the $8.3 billion. Even so, the Justice Department's decision is a major step forward in holding the company accountable for pushing OxyContin and thereby playing a major role in causing America's current opioid epidemic. The Centers for Disease Control and Prevention reports that more than 450,000 Americans have died of the opioid epidemic since 1999. The Justice Department's recent actions could make it easier for thousands of other lawsuits against the company to be settled, as well as help state and local governments pursue compensation for the money they have had to spend addressing the opioid epidemic.

In addition to the penalties being imposed on Purdue, the company's owners — members of the wealthy Sackler family — agreed to pay $225 million in damages as a way of resolving its civil False Claims Act liability. These members of the Sackler family have previously denied that they and Purdue exaggerated the benefits of OxyContin and falsely played down its risks in order to more effectively market it as a safe pain management medication, and in a recent statement denied any criminal wrongdoing. The company itself pled guilty to violating anti-kickback laws and defrauding federal health agencies, with its penalties including $3.54 billion in criminal fines, $2.8 billion in civil penalties and $2 billion in criminal forfeiture.

Federal prosecutors accused Purdue of paying two doctors through the company's doctor speaker program, and an electronic health records company, to increase prescriptions for its opioid drugs like OxyContin, according to The Washington Post. As District of Vermont U.S. Attorney Christina E. Nolan said at the Justice Department briefing, "The kickback effectively put Purdue marketing department in the exam room with their thumb on the scale at precisely the moment doctors were making critical decisions about patient health."

"The resolutions do not include the criminal release of any individuals, including members of the Sackler family, nor are any of the company's executives or employees receiving civil releases," the Justice Department wrote.

Writing for Salon last year, Dr. Gayle Woodson described how a 1979 study in the New England Journal of Medicine (NEJM) claimed that only four patients out of 1,200 who were given narcotics to manage pain wound up developing addiction. The false premise, Woodson pointed out, was that the pain negated the euphoric effects of drugs like opioids and therefore meant they were much less likely to become addictive.

"The drug companies sold us doctors a bill of goods," Woodson wrote. "To be honest, we bought it, hook, line, and sinker. Careful review the original NEJM article would have shown us that the data did not support the claim of non-addiction. We should have required clinical studies to prove that pain negates euphoria. Instead, we swallowed their propaganda and accepted the biased research findings that they funded."

She added, "The marketers and distributors of opioid pain medication are now being held accountable in the courts for untold death and misery. The fines they pay will in no way compensate for the deaths and destroyed lives."

Opioid addicts themselves were often aware of the pharmaceutical companies' actions. Salon spoke with several opioid addicts in Pennsylvania last year, with one of them commenting that "Purdue Pharmaceuticals still runs Connecticut" and that "the Chinese are still making billions of dollars making phenol in labs. Sending it over here. And flat-out, everybody is addicted to something that takes away the pain. And it's just become so readily available in the form of Percocet, to kids who get their wisdom teeth pulled, or Darvocet, to people with skin issues. Dilaudid for people with more breakthrough-type pain with cancer and whatnot."

He added, "The pharmaceutical industry is never going to let it go away. There's just too much damn money in it is the problem."

Correction: At one point in this article the term "Sackler family" was used, which erroneously implied that the entire Sackler family is behind this controversy. The controversy only involves specific members of the Sackler family and this story has been edited to reflect that fact. Salon apologizes for the error.