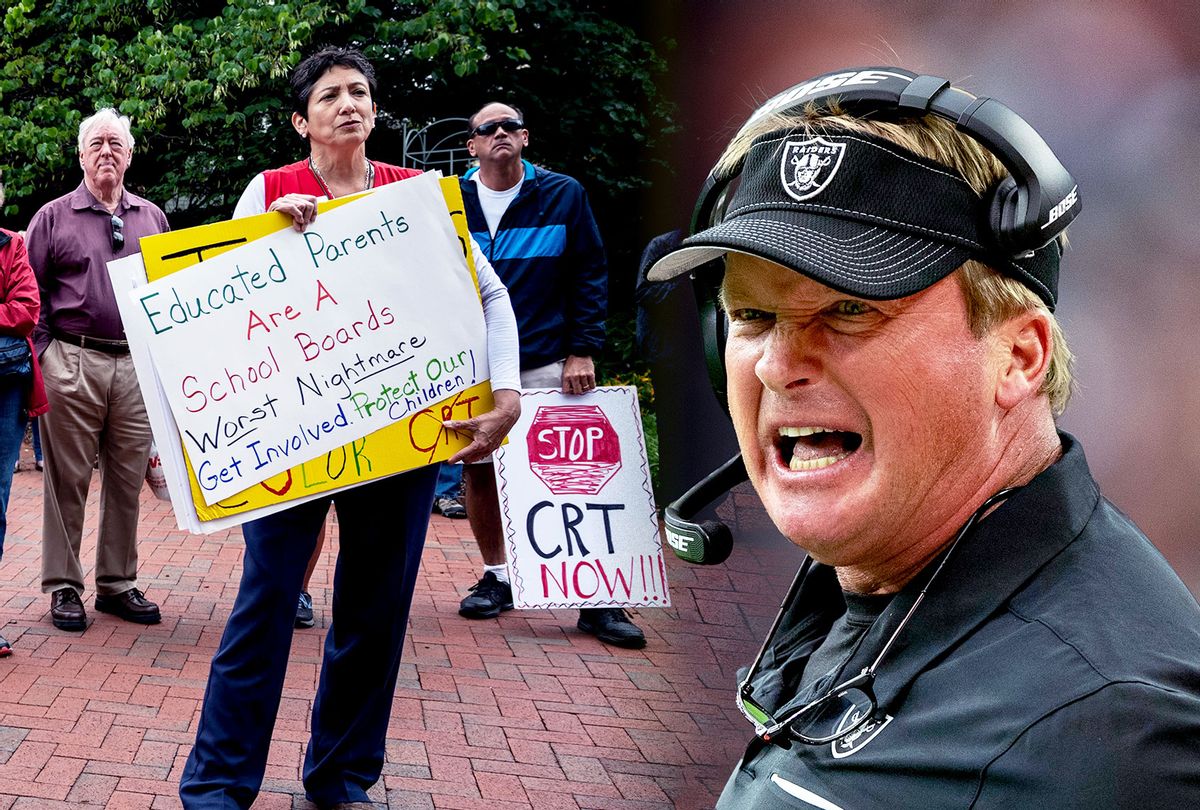 People hold up signs during a rally against "critical race theory" (CRT) being taught in schools at the Loudoun County Government center in Leesburg, Virginia on June 12, 2021. | Head Coach Jon Gruden of the Oakland Raiders (Photo illustration by Salon/Getty Images)
--

As soon as it was announced that Jon Gruden was stepping down from his role as the coach of the Las Vegas Raiders, the right-wing punditry exploded in outrage over the only oppression they'll accept as legitimate: The supposed victimhood of a bigot held accountable for the ugly things he says.

The whole thing started when a review of alleged workplace misconduct at the Washington Football Team, ordered by NFL commissioner Roger Goodell, turned up an email in which Gruden, then a television analyst, made fun of the head of the players' union, DeMaurice Smith. "Dumboriss Smith has lips the size of michellin tires," Gruden wrote in an email to Bruce Allen, who was then the president of a team whose name was a flat-out racial slur. Soon a bevy of reports about gross stuff Gruden wrote in emails came out, including mocking female referees, snarling about the league hiring "queers," and grousing that players who protest racist police violence should be fired.

Gruden employed what writer Jamelle Bouie has mocked as the "racist bones" defense. The sheer amount of garbage that poured out of his keyboard, however, made it quite clear that Gruden could not continue to be in a high-level management position. Being the boss means being able to plausibly project the persona of respect for the people who work under you. Gruden can never do that again.

But, of course, in right-wing circles, Gruden's just another noble martyr sacrificed to the supposedly draconian demands of "cancel culture."

Conservative pundits downplayed the content of Gruden's writings as "off-color" or "an opinion that wasn't PC." Talk show host Charlie Kirk cast Gruden as the real victim of discrimination, insisting that he is targeted because he's "a white, Catholic, conservative male." Steven Crowder, another right-wing talker, declared, "nothing that I have read here is offensive or fireable." Unfortunately, this gambit got a lift from the euphemism-heavy coverage offered by the New York Times, which mostly avoided direct quotes in favor of vague descriptions, allowing the whiners a bit of wiggle room to pretend that the emails weren't so bad.

But really, all of this supposed concern for "free speech" and consequence-free bigotry is in clear bad faith. The same conservatives who are wringing their hands because a rich coach got an early retirement also back a national movement to suppress genuine free speech and vigorous, challenging discourse in education. It's just that the opinions, facts, and ideas they want to censor are ones that support an egalitarian ideology. In other words, the right isn't for free speech. They just want a world where it's safe for bigots — but not for anyone else.

For over a year now, the right has been up in arms over what amounts to a conspiracy theory about something they call "critical race theory" being taught in public schools, though it's hard to pin down what they seem to believe "critical race theory" even is. In reality, it's an academic theory that is largely taught in law schools and other graduate-level courses, not in public schools or even really much at the undergraduate level. But almost no one in the right-wing paranoia class uses the term correctly, instead treating it as a catch-all scare term to fear-monger to conservative white people who don't want their kids coming home with uncomfortable questions about the history of slavery or Jim Crow.

Does literally anyone on the Right actually know what critical race theory is?

This fake threat is being used for a very real campaign to eradicate educational materials or classroom lessons that might lead students to believe racism is bad. Across the country, Republican-led state legislatures started bringing up bills under the guise of banning "critical race theory" which are actually written quite broadly to make it difficult for educators to teach basic history lessons on slavery, segregation, and the civil rights movement.

All of this has led to a national rush of book-banning and other censorship efforts in schools, largely focused on suppressing information about racism, but also spreading out towards efforts to muzzle information about sexuality or diverse sexual identities.

"We're seeing a real effort to stigmatize any works dealing with race in America or the experience of Black, Indigenous, or people of color," Deborah Caldwell-Stone, the director of the American Library Association's Office for Intellectual Freedom, told Education Week. The excuse, she added, is always "critical race theory," even though "these works have nothing to do with critical race theory."

The impacts are far more frightening than some wealthy white guy having to quit working a prestigious job to live a life of luxury. Amelia Nierenberg of the New York Times has a good rundown of some of the more alarming examples. For instance, Pennsylvania conservatives (temporarily) succeeded in banning books "told from the perspective of gay, Black and Latino children." Jerry Craft, whose Newberry-winning book "New Kid" tells the story of a Black student trying to fit into a mostly-white school, was not only banned by a Texas school district but the author himself was stopped from coming to the school. And across the Midwest, conservatives are not only banning materials that educate kids about sex and sexual identity, but threatening to prosecute educators for "child porn" for having sex education materials.

In one Missouri school district, a Black administrator was drummed out of her job by white parents who were furious that the school was teaching books that taught that racism was real, including "Ron's Big Mission," a story of a Black astronaut who had to overcome the racism of the 1950s to get an education. In a Georgia school district, Black students accused a group of white students of brandishing the Confederate flag while using racial slurs. But when students organized an anti-racist protest, the school punished the Black organizers.

Taken together, what becomes clear is that the right has no interest whatsoever in "free speech," neither the legal definition of it (restrictions on government power of censorship) nor the more expansive discussion about what is and isn't considered acceptable language in the workplace or public sphere. They just want a society where racists and other bigots can say whatever foul things they want with no pushback, while people who advocate for social justice — or just want to teach kids the truth about American history — are silenced.

The "cancel culture" crybabies are just thin-skinned bullies. They want to abuse other people freely, but lose their minds over any pushback, no matter how substantive it is — or how gentle it is. The histrionics over Jon Gruden are just more of the same, an effort to distract from the fact that the real censors in American culture are mostly on the right.