It's not even Halloween, and Republicans are already claiming Biden is "stealing" Christmas

The "War on Christmas" rhetoric began on Oct. 4 with a Fox & Friends segment — and it won't stop anytime soon 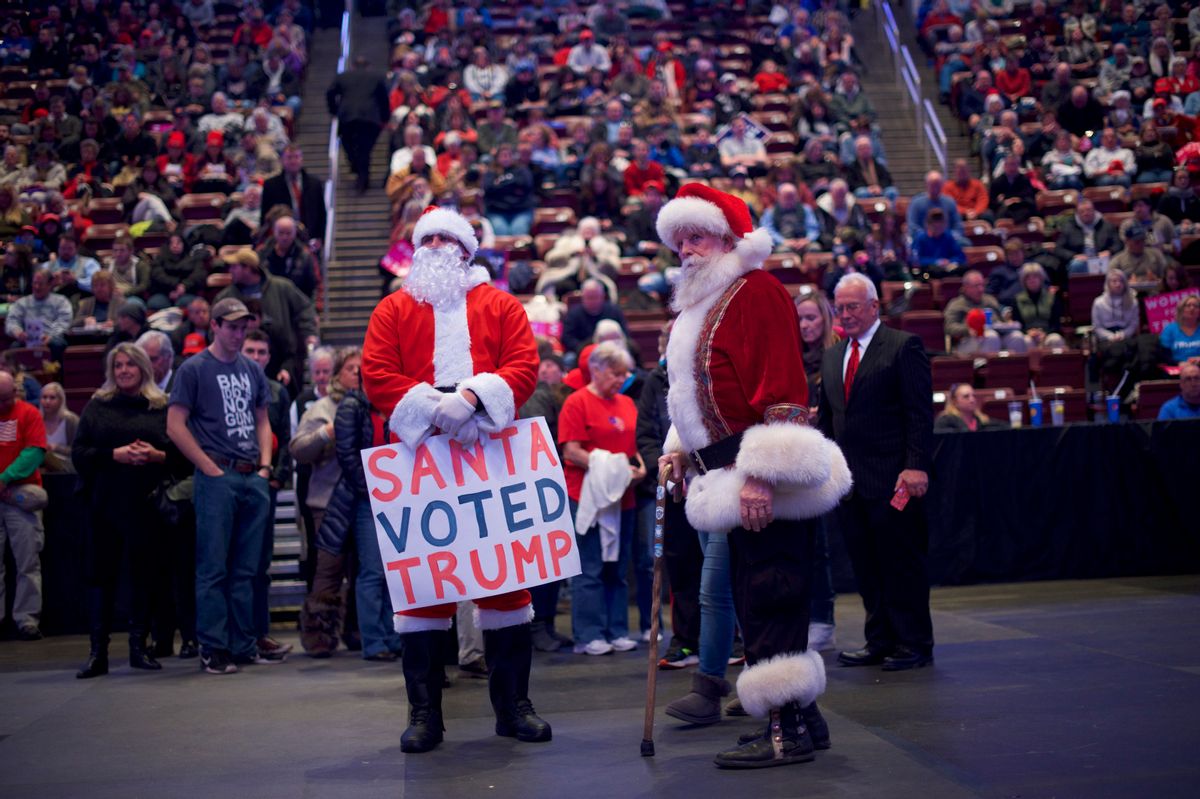 Christmas is still more than two months away — but that hasn't stopped President Joe Biden from ruining the holiday, at least in the minds of Republican lawmakers and right-wing pundits.

"This is the guys who is trying to steal Christmas," the House Republican caucus tweeted this week, typo and all, alongside a strangely framed picture of Biden's back as he walked away from a podium. "Americans are NOT going to let that happen."

This sort of holiday culture war sentiment is, of course, nothing new for high-profile conservatives. The "War on Christmas" as a rhetorical concept dates back to at least 2005, with the release of a book written by the right-wing radio host, John Gibson, appropriately titled, "The War on Christmas: How the Liberal Plot to Ban the Sacred Christian Holiday Is Worse Than You Thought."

Since then, it has become an annual yuletide tradition of sorts for Americans to debate whether the country is sufficiently deferential to the plurality of its citizens who celebrate the Christian holiday, and a favorite topic for conservative-leaning news outlets like Fox News as the end-of-year news cycle slows. But this year's histrionics are notable for one reason, at least — they're starting months earlier than normal.

The outrage du jour this time around is centered around rising inflation and a growing supply-chain crisis, which is causing a number of shipping bottlenecks that have slowed the modern economy's system of just-in-time delivery and threaten to roll back the dizzying array of consumer choices Americans have come to expect around the holidays.

Though there are myriad issues causing the current snarls — with an ongoing pandemic deserving most of the blame for all of them — Fox News and other right-wing outlets have seized on the idea that Biden's policies are what's causing the situation. It's not exactly an unpopular opinion, with an October Quinnipiac poll showing that just 29% of Americans think the economy is in "good" condition.

But some outlets have taken the argument a step further, seeming to suggest that Biden and in some cases public health health authorities are actively conspiring to stifle Christmas celebrations for some reason.

The "War on Christmas" rhetoric began this year on Oct. 4, to be exact, with a segment on Fox & Friends that also managed to work in a shot on right-wing boogeyman Dr. Anthony Fauci, the White House COVID-19 adviser under both Biden and former President Donald Trump.

"No wonder Dr. [Anthony] Fauci is about to cancel Christmas," host Brian Kilmeade lamented, apparently referring to a statement of caution Fauci had made weeks earlier about planning large family gatherings in light of the ongoing COVID-19 pandemic. "We're not going to have any presents anyway, so it's going to really work out," Kilmeade added.

The segment was full of these sentiments, from host Greg Gutfeld calling 2021 America a "dystopia" to Dana Perino's insistence that the Biden Administration was entering a "crisis of confidence danger zone" over his handling of the situation.

Over the last week, it has quickly become a Republican talking point that Biden is "stealing" or "ruining" Christmas — even Trump got in on the action, blasting out a mass email through "Save America," his PAC, dubbing this year's holiday "Biden's Blue Christmas."

The House Republican caucus even tweeted out a picture Thursday of Biden's face superimposed on Dr. Suess' iconic Christmas-hating character "The Grinch."

The Biden White House, for its part, doesn't dispute that things like slow shipping and marginally higher prices for consumer goods are happening. Instead, officials have taken to pointing out that a lot of the problems impacting the economy right now began last year while Trump was president, and have defied the easy solutions championed by Republicans, like ending enhanced pandemic-era unemployment insurance.

The Biden Administration this week announced it would move several California ports to a 24-7 schedule that will hopefully speed up supply chain delays, though it remains to be seen whether the effort will have an impact.

"There will be things that people can't get," a senior White House official told Reuters this week when asked about holiday shipping. "At the same time, a lot of these goods are hopefully substitutable by other things."

"I don't think there's any real reason to be panicked, but we all feel the frustration and there's a certain need for patience to help get through a relatively short period of time."