Joe Biden's Nixon moment: A policy agenda that could change history — and the media yawns

Nixon pushed for a startlingly progressive agenda 50 years ago, but the Beltway press didn't even pretend to care 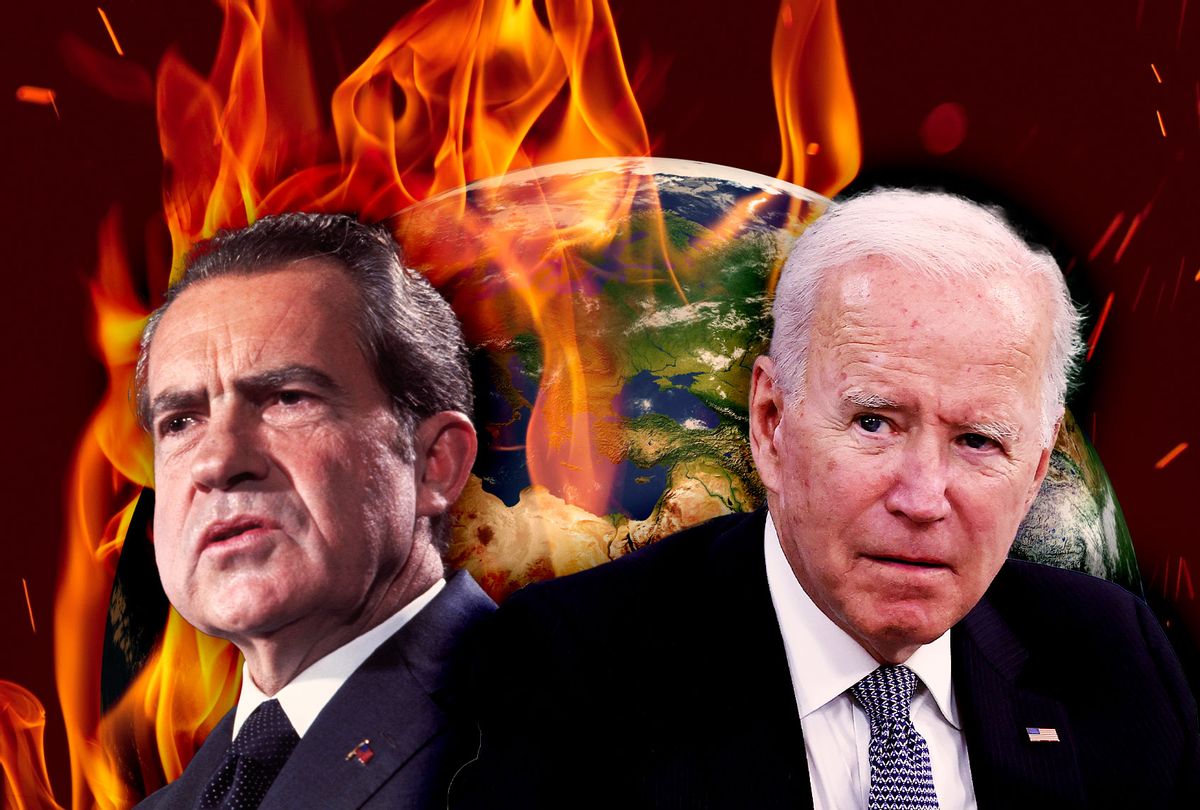 American media, and especially the political press corps, has a history of failure when it comes to explaining the policies that could change people's lives. Last week, House Speaker Nancy Pelosi raised eyebrows when she blamed the media for failing to do enough to "sell" Biden's Build Back Better legislation. Although that may have been an unwise choice of words, Pelosi's underlying point was valid. Senate Budget Committee Chairman Bernie Sanders echoed her remarks a few days later, stating that "the mainstream media has done an exceptionally poor job" of focusing on what matters in the bill. Observing that the battle over the legislation is covered like a Machiavellian saga out of "Game of Thrones" or "House of Cards," Sanders added that the press offers "very limited coverage as to what the provisions of the bill are and the crises for working people that they address."

This is of course nothing new. The press corps prefers to cover politics in the same way it covers the World Series or the Super Bowl. When it comes to the actual substance of policy-making, too many in the news media avoid it entirely, or convey that it's complicated, boring and almost superficial, like the color of a team's uniforms, rather than the central issue.

To better understand what is happening to Biden's agenda right now, it may be instructive  to look at a similar moment in history, not terribly long ago. It's been 50 years since Richard Nixon (of all presidents) attempted to launch a "New American Revolution," one that could have saved millions of lives and perhaps prevented or forestalled the Republican Party's lurch to the far right. But the media didn't consider that an interesting story, and the Democrats who controlled Congress didn't want Nixon to score a political win, so most Americans had no idea it was happening. Nixon's ambitious agenda largely went nowhere, and we are all worse off for it.

Introduced during his 1971 State of the Union, Nixon's "six great goals" were designed to "change the framework of government itself" and "to reform the entire structure of American government so we can make it again fully responsive to the needs and the wishes of the American people." It combined an authentic desire to realize policy objectives like combatting poverty with a conservative emphasis on empowering local governments. Four of the six priorities were a Family Assistance Plan that would have providing a guaranteed base income and job training to poor working families; a health care reform agenda more ambitious than Obamacare, that would have subsidized coverage for lower-income Americans while mandating private insurance for most employed people; environmental regulations that would have expanded the national park system and imposed new limits on pollution; and an innovative plan to streamline the federal bureaucracy.

None of those were enacted at the time, although some were passed later, in indirect or watered-down form. Nixon did succeed in reviving America's economy by ending the gold standard, imposing new taxes on foreign cars and implementing temporary wage and price freezes. But most of his ambitious vision never materialized. Even more striking, the American people largely had no idea that Nixon was sincerely trying to implement plans that could have ameliorated poverty and helped save the planet.

Journalist Theodore H. White chronicled Nixon's frustration in "The Making of the President —1972":

... after six days of desultory attention, the media abandoned discussion of Nixon's revolution — his proposals were too detailed, too technical, to sustain vivid political writing. Governmental housekeeping was a subject to be dismissed to Congress, where the New American Revolution was to die in committee and partisan debate.

More important, probably, was the effect of the reception on the President himself as the year wore on. Whatever he proposed to do "to make things work" (which was one of his favorite phrases) was apparently not to be taken seriously or was considered too boring or too particular for the great national debate in which he might, in his own imagination, appear as Solon.

Consider these events in the context of Nixon's presidency. Elected in the tumultuous year of 1968 by a slim plurality, Nixon spent his first term largely focused on foreign policy endeavors. These mostly succeeded: Nixon ended the Vietnam War, opened arms-control negotiations with the Soviet Union and opened up with relations with China. His domestic agenda was anemic by comparison, pinioned between a Democratic Congress and a Republican Party split between conservative and moderate wings. Nixon certainly pandered to the right by launching a "War on Drugs" and cracking down on anti-war protesters, but that kind of red meat would only get him so far. To get reelected, Nixon had to expand the Republican coalition to include moderate Democrats. That would be challenging if he wanted to avoid alienating conservative Republicans (many of whom were appalled at this 1971 agenda), but Nixon considered it to be worth the risk.

Democrats did not agree. They certainly didn't want Nixon to go into the 1972 election with a record of reducing poverty, expanding access to health care and improving environmental protection, all policies the Democrats wanted for themselves. Instead of considering that Nixon's program was the right thing for the country and the world, they viewed it as a threat to their political dominance. As things turned out, of course, this strategy was a failure at both ends: Democrats sank Nixon's agenda, but he was re-elected anyway, in one of the biggest landslides in history.

It is also useful to remember that this was an era when the Republican Party was not necessarily entranced by laissez-faire economics, which Nixon and other GOP leaders saw as both bad politics and bad policy.

As Richard D. Wolff, professor emeritus of economics at the University of Massachusetts Amherst, told me recently, the Great Depression had exposed capitalism's structural weaknesses, and American politicians arrived at a bipartisan consensus that markets needed to be regulated and workers protected. There was political disagreement about the extent of such regulation, but for the middle portion of the 20th century, both parties understood that the best way to preserve capitalism was to offer ordinary people had a degree of economic security.

This "wasn't a critique of underlying capitalism, not at all," Wolff explained, but rather "a statement that it has some problems, things it doesn't do all that well and that can get you into trouble." Nixon himself acknowledged this by declaring, "We are all Keynesians now," a reference to the liberal economist John Maynard Keynes, who saw government intervention as a central element in market economies. So while Nixon's six goals were ambitious, they were well within the confines of mainstream politics at the time. It would be impossible to propose anything like his New American Revolution today, let alone pass it. But in 1971, it was at least conceivable — or would have been, if the media and the public had even paid attention.

Except for the politics wonks, though, none ever did. This brings us back to the Biden era.

When Pelosi blamed the media for not "selling" Biden's package, she was answering a reporter's question about why Democrats haven't been able to persuade the public to support the bill. Conservative outlets have insinuated that Pelosi wants the media to be her political allies, but in fact it's the media's job to inform Americans about policies that could help or hurt them. One can delve into policy details without either endorsing or opposing them. There is a crucial difference between taking sides in a political fight and simply making sure that the human stakes of the battle are sufficiently well understood.

Biden's whopping legislative package pertains to matters that directly impact the federal budget (this makes it filibuster-proof) and would pay for itself through raising taxes on corporations and the wealthy. Operating within these narrow parameters, the bill expands access to health care, provides financial assistance to parents, invests in job creation, bolsters green energy and in other ways fights climate change. The stakes could not be higher, as recent years of increasingly apocalyptic weather patterns have made clear. And even with the COVID-19 pandemic apparently beginning to fade at last, the economic recovery has been weak and progressive policy reforms are essential.

Yet the media rarely, if ever, frames the debate in these terms. Instead it has been obsessed with the drama around Joe Manchin and Kyrsten Sinema threatening to derail Biden's agenda and possibly define him as a "failed" president. It breathlessly covers every Republican attack, and every panicked Democratic attempt to save Biden's legacy. Polls show that the main policies in Biden's bill are very popular with the public, but most Americans don't even know that the legislation would achieve widely desired goals like lowering prescription drug costs and expanding Medicare coverage.

They also don't realize that moderate Democrats, by holding the legislation hostage to their capricious whims, may wind up forcing legislators to drop provisions that are essential to people's lives. A child tax credit that shrinks child poverty by half, pre-K subsidies, prescription drug pricing reform and comprehensive climate change protection may all be watered down or jettisoned to meet seemingly arbitrary spending limits (or to appease big donors). Biden has already hinted that free community college will probably be dropped, and infrastructure investment may be reduced to avoid tax hikes on the rich, which will inevitably mean that fewer jobs get created. Children may starve, workers may struggle, sick people may die and the world may literally go up in flames, but the media does not consider these potential consequences even newsworthy.

Because conservatives have effectively gaslit millions into believing that the media has a liberal bias, it has become difficult to explain that the truth is literally the opposite. I do not attribute the media's failure here to a sinister conspiracy or to a conscious ideological slant. Biden's agenda is far less ambitious than the big bills passed under Franklin D. Roosevelt or Lyndon Johnson. Those presidents enacted major reforms to capitalism, government and civil rights; Biden is merely trying to patch some of the most glaring holes in American society. Yet because drama sells more copy than policy, even this vital nuance is lost in the mainstream conversation. So when Biden's programs are cast as socialist, most voters won't know enough to see that as an entirely ludicrous characterization — or understand how damaging those lies can be.

Fifty years after the egregious coverage of Nixon's agenda, the media has evidently learned nothing from its mistakes. This time, the consequences will be even worse.