Trisha Yearwood and Garth Brooks both love a late breakfast. This lasagna ticks all the yummy boxes 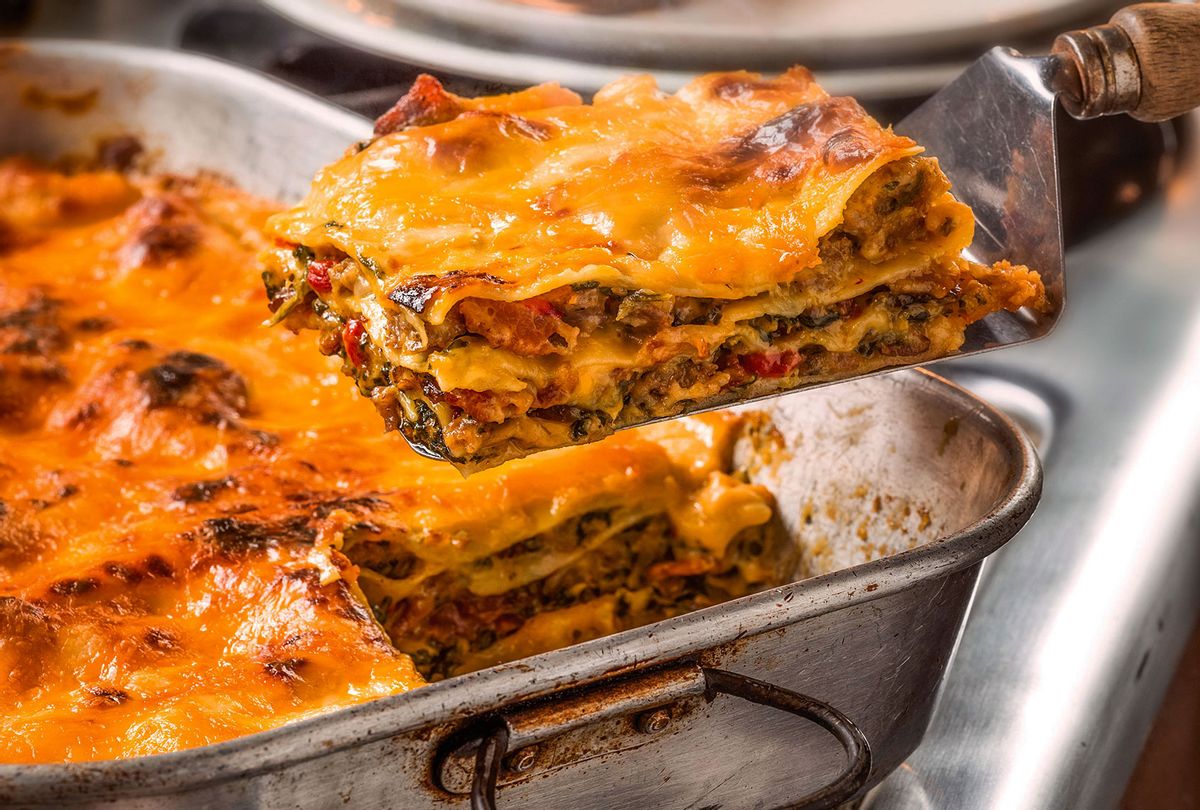 Excerpted from TRISHA’S KITCHEN: Easy Comfort Food for Friends and Family © 2021 by Trisha Yearwood with Beth Yearwood Bernard. Photography © 2021 by Ben Fink. Reproduced by permission of Mariner Books, an imprint of HarperCollins Publishers. All rights reserved.

At home, Garth Brooks loves to dream up ideas for new recipes and ask Trisha Yearwood if she can figure them out. Luckily, as Yearwood writes in her new cookbook, she's "always up for the challenge."

One such dish is "Garth's Breakfast Lasagna," and it's a standout from the 125 new recipes in Yearwood's latest cookbook. In this reimagined version of a comfort staple, bacon, sausage and cheese are layered between oven-ready lasagna noodles. Brooks likes sage-flavored sausage, but Yearwood says it's easy to "change things up" with either maple-flavored or spicy sausage.

On a recent episode of "Salon Talks," Yearwood recalled developing "Garth's Breakfast Lasagna" for "Trisha's Kitchen," a darn good book of comfort food recipes that also includes family stories and photos. As it turns out, breakfast lasagna is a great way to sneak some veggies onto Brook's plate. Oh, and it's a great choice for supper, too!

"There are breakfast lasagnas out there. Most of them are a casserole, but he was like, 'I want the noodles. I want you to really think about the layering.' And I'm like, 'All right,'" Yearwood told Salon Food. "So, my mother used to make a cheese sauce that she would basically — this is embarrassing to say — but she would put it on broccoli to get us to eat our vegetables. We would eat anything with cheese sauce on it. Instead of red sauce, I made that cheese sauce to use in the layers. And then it's got pork, and it's got sausage, and bacon and eggs, of course, and cheese and then the noodles."

"And then I threw in some spinach and some pimentos, " Yearwood continued. "And it's funny, I made this recently, and Garth said, 'I don't think there was spinach in mine.' And I'm like, 'Well, we needed some green. We need some color in there.' It was all beige, but he loved it. It's really good."

RELATED: Trisha Yearwood on family recipes and the power of love

When Yearwood recently appeared on "Salon Talks," we talked about her new cookbook, the importance of family, the joys of southern cooking and the secret ingredient that fuels her kitchen. You're going to want to invite your friends over for brunch next weekend after you hear about these exciting new recipes. To learn more, watch our conversation on Youtube or read our conversation here.

"A lot of my new recipes come from conversations I have with Garth. He usually dreams up some idea and asks if I can figure out how to make it, and I'm always up for the challenge. We both love a late breakfast, and this lasagna ticks all the yummy boxes (and it's good for supper, too!) The cool thing about this concoction is that you can make it your own using your favorite breakfast meats, greens, and different kinds of veggies and cheeses." — Trisha Yearwood

2. Using kitchen shears, cut the bacon into small pieces, dropping them into a medium saucepot. Cook the bacon over medium heat until crispy, 5 to 7 minutes. Drain on a paper towel, and reserve 1/4 cup of the drippings in the pot.

4. Mix the cheddar and Gruyère in a large bowl. Return the pot with the bacon drippings to medium heat. Whisk in the flour and cook, whisking, until slightly browned, about 2 minutes. Add the milk and continue whisking until slightly thickened, about 5 minutes. Remove the pan from the heat and add 3 cups of the grated cheeses. Stir until the cheese has melted, 1 to 2 minutes. Season with 1/2 teaspoon salt and 1/4 teaspoon pepper.

5. Spread 3/4 cup of the cheese sauce over the bottom of the prepared pan. Layer 3 noodles over the sauce. Top with one-third of the bacon sausage mixture, one-quarter of the remaining grated cheeses, and one-third (about a heaping 1/2 cup) of the cheese sauce. Repeat the layers two more times, making sure all the top noodles are covered with the sauce.

6. Add 1 teaspoon salt and 1/2 teaspoon pepper to the whisked eggs and pour over the lasagna. Top with the remaining grated cheeses.

7. Bake for 40 to 45 minutes, until the cheese is golden brown and bubbling and the eggs are set. Remove from the oven and let rest for at least 15 minutes before serving.